Elmer had told us that we would be sharing the campground this weekend with “some” girl scouts, so we weren’t surprised when five vehicles rolled in stuffed with camping gear and giggling little girls.

We had gotten there earlier in the day, had the RV all set up, and had been sitting in the shade watching western bluebirds flit around the trees and ravens bully each other about the campsites.  We were right at the base of the mountain and could look up through the oaks to where puffy clouds were bumping into the mountain top on their way east.  The campground had been almost empty; the stillness broken only by the sounds of nature and some road noise a little ways away.  We were getting in some serious relaxing, and then in rolled these five. 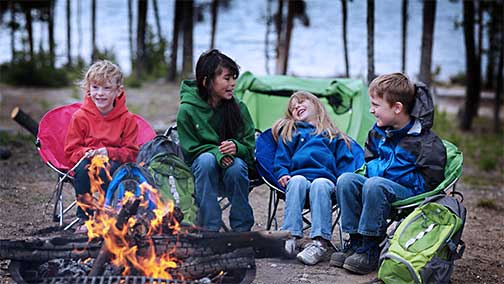 The fourth car in line jerked to a stop in a campsite, all four doors flew open, and the adult driver and four little girls all took off running for the bathrooms.  I guess they must have drunk 100 miles worth of pop on a 50 mile drive.  We watched with amusement as the adults began hustling and bustling about trying to set up camp while simultaneously keeping an eye on twenty rambunctious seven year olds.  We weren’t even concerned when the next contingent of seven more vehicles pulled in and unloaded another cargo of squealing, laughing little Brownies, but it kept up that way for the next several hours and on past sundown.  My wife stopped counting vehicles at twenty nine.  Turns out we were sharing our solitude with about two hundred and fifty Brownies and Girl Scouts from the San Diego area!

The tranquility of our little campground nestled at the foot of Mt Palomar had been shattered by a welter of childish chattering, laughing, giggling and squealing punctuated by the occasional frantic adult reprimand.  Fortunately, we aren’t old fuddy-duddies yet and found it all somewhat amusing.  Perhaps the fact that we could literally say “been there, done that” and simply be spectators this time helped.  Slowly, as the evening wore on, the din began to settle.

One troop of Brownies marched by after dinner, each little girl in step with her very own count and cadence, leaders at front and back, on their way to the head.  They each had their troop’s pink hats and jackets on and were carrying a lingerie laundry bag with cup, bowl, plate, KFS, toothpaste and toothbrush swinging this way and that.  They conjured up a vision of a big pink caterpillar bobbing along on its way to the mad hatter’s tea party.  Other troops were doing their night things and before long they were all bedding down after an exciting afternoon.  By ten o’clock all was well and we were relaxing with our respective books before turning in.

My wife likes to sleep in on weekends or when camping; the Brownies weren’t aware of that.  The first giggle coincided with the first rays of the sun.  By full sun the campground was a flurry of activity moving in time with the same exuberant din of the night before.  The adults looked none the worse for wear and were busy directing and herding and whatever it is that leaders are supposed to do.  After my first cup of morning coffee and the ritual “sss” I was drawn outside by curiosity and just stood there, watching.

The campground was not large and it was surrounded by private land and a busy country road so there weren’t any trails for hiking.  But that didn’t stop the leaders.  At some prearranged time all the little girls lined up with their fanny packs and water bottles and little bags of trail mix, and away they went on a hike, once again each marching to her own personal count and cadence.  As the last one disappeared over the hill a strange quiet overtook the campground.  Ravens came out of the trees to pick over scraps or plates left unattended.  I could hear birds chirping and the wind rustling through the oaks.  My wife came out of the RV wondering what that strange sound was.  Fifteen minutes later they were back, exhausted, water bottles empty, trail mix gone.  The ravens took for the trees; I could no longer hear the birds, and that strange din of high pitched giggles and squeals blanketed the campground once again.

The rest of the weekend alternated between apparent turmoil and blessed tranquility.  We delighted in watching the girls enjoy their weekend as only little girls can.  They seemed to tear into each moment like a birthday gift, and they could be distracted by the slightest pique of their interest or curiosity and would go squealing and giggling off in yet another direction.  At one point my wife remarked that little girls were really funny.  They could be walking along perfectly normal when something in their brain would trip, they’d do a cartwheel, and then resume their way as if nothing happened.  Little boys begin the same way, but the brain trip usually starts another game of I-dare-you which always, always ends in a rock throwing contest.

Slowly, almost imperceptibly, the adults withered away as the weekend progressed and they tried to maintain some semblance of control.  But on Sunday morning we noticed that, where the girls were excited and the adults subdued the day before, now the situation was reversed.  By the time we crawled out of the sack that morning many of the troops had already packed up and were eating breakfast in an empty campsite.  Smiling leaders and assistants were coaxing reluctant troops to police trash and load gear.  Before long car doors were slamming and caravans were pulling out leaving only full trash cans and quiet behind.

And Barb and I?  We were left sitting in the shade with a cup of morning coffee watching bluebirds flit among the trees, ravens argue over tiny morsels left behind, and nuthatches, those little birds that scamper down trees upside down, seek out breakfast.

What Would You Wear on a Night Out to a Casino?

I Still Feel You There