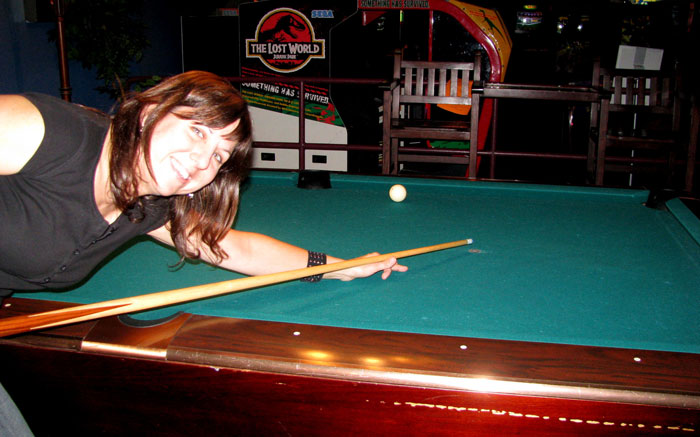 Listen, dear reader, maintaining a rail-smooth relationship with any woman minus the sharp banks can be difficult enough without having to add a bar pool to the already bumpy love equation.

Pool, like skiing, skating or even bowling is a sport to which one is doomed to mediocrity unless having first been first introduced to it at an early age. Say age five, for instance. Anyone like me who has only dabbled on occasion in the barroom pastime is relegated to being the one person no one wants to partner up with or play against unless forced to do so.

Which of course, means that for years I avoided the pool table out of simple fear. Who wants to humiliate oneself in front of an entire bar of scantily clad women and burly men?

Anyone who’s ever spent time with a visual artist who regularly shows their work in some of the most respected New York galleries, knows full well that the last place on earth you might catch them passing the time is inside some seedy bar, slamming back a couple of Buds while playing back to back games of 8-ball. But that’s what this particular artist calls fun.

And since I consider hanging out in some of the world’s most dangerous if not despicable dives some of the greatest fun you have with your clothes on, I naturally accepted the offer. 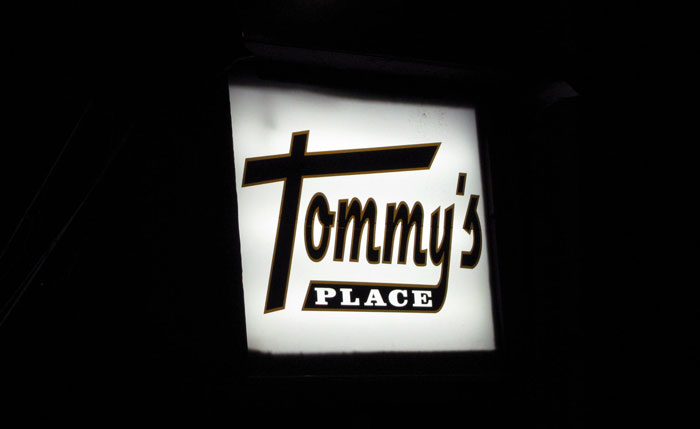 What’s more, they aren’t afraid to attempt them with an entire crowd of revelers watching over them. They often team up and compete in leagues and are knowledgeable about only the best pro tables, what they cost, their ability to maintain a level balance, and more.

They also store lots of useless cue sports trivia inside their gray matter. Did you know that Mary the Queen of Scots was wrapped up in her billiards cover when she died?

Did you further know that Shakespeare was a big billiards fan having coined the infamous phrase, “Let’s to billiards?” Even Thomas Jefferson snuck a pool table into his Monticello mansion even though it was against the law to engage in the gambler’s sport in the new America.

Bar pool can be found in just about any drinking establishment that sports a pool table. Preferably an old Brunswick model that harkens back to the 1960s or 70s, is horribly out of balance, its cues warped, its bumpers worn out, its green felt having long faded and now stained with all manner of liquor, beer, and Buffalo chicken wing hot sauce.

Upscale cocktail lounges, country clubs, sushi bars, hotel lobbies, TGIF Fridays and all manner of upscale eateries do not count. Nor does playing at home even if you’re pounding a few Vodkas with your best buds over a gimmicky billiards game like “Screw Your Neighbor.”

Several types of watering holes are suitable for housing a good game of bar pool. There’s the bikini bar, where the bartenders are extremely attractive, scantily clad women. There’s the bowling alley, which always houses a big bar with a pool table that no one uses until late at night after the lanes have shut down. Then there’s the local bar that’s strictly for getting drunk.

Such places might also sport a dartboard, a couple of TVs, and a jukebox that no uses except on Friday for a drunken line dancing. These establishments usually charge a dollar (in quarters) for the privilege of playing a single game.

The standard etiquette that must be followed for any would-be pool player from Brunswick, Maine to Portland Oregon, is that one should respectfully set one’s quarters onto the table in order to play the winner of the previous game. Failing to abide by that one strict rule can easily get one’s nose broken in several places if not careful. This includes women and men.

But it’s in this kind of “Barbary Shore” rough-neck environment that my classically trained, Master of Fine Arts-holding, college prof girlfriend wants to spend her evening. As a beer drinker, I should be happy. But what I’m about to find out is that it’s not only the bar and its inebriated tough-guy clientele that pose the danger.

The real danger is about to come from Gina herself. Turns out, she doesn’t like to lose under any circumstance. Not even to the one man she has promised her heart. Under that creative shroud, lies the heart and mind of a savage competitor and a famished wolf all dressed up in a Soho artist’s tall black boots, leggings, and miniskirt.