Parking the rental car across the street, he looked over at the little yellow house set up on a hill. It was a house he knew well, from years ago, from another time.

There was a part of the structure he felt particularly attached to, the right front corner. Though it was connected with the house, it was actually a separate studio apartment, which some have nicknamed a mother-in-law suite. That other time of long ago took over, and memories recalling details began stirring within him… 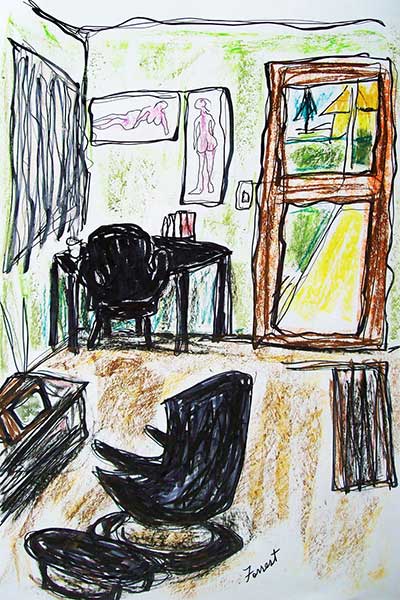 Details, like the driveway next to the house. It ran all the way to the backyard where a large garage stood, inside there was a long wooden tool bench by a window that frequently let the sunlight beam in. It was on this bench his landlady would put grapes to dry into raisins, big fat ones, so flavorful and sweet.

He would treat himself to a few every time in went in to get his bicycle. Farther in the backyard, there were fruit trees, lemons, and oranges, and a healthy-sized plot of grass was in earlier days, the landlady’s son played baseball with his buddies.

Closer to the back of the house, there was a covered patio, complete with a fridge full of beer. Going back out the driveway towards the front, he’d pass his beloved taupe-colored 1965 VW bus, which seemed to spend as much time in the repair shop as on the road.

Nearby, passenger jets made a thundering descent to Los Angeles International Airport. The landing path was over the LA Forum a few miles away. Depending on the direction of the wind, jet exhaust blew across the neighborhood, filling your nostrils with a pungent odor.

The little yellow house had a medium size front yard with embankment greenery, an ivy facade stretching up from the sidewalk. There were severely trimmed trees on either side, which made the much-needed shade in hot weather a lost option. Underneath the front windows grew Bird of Paradise plants with their magnificent emblazoned flowers.

In the middle of the yard, a white cement stairway led up to the house where kitty-corner front doors on the front porch gave entrance to the house and apartment. If you opened the sienna-colored screen door to your right, then a front door, you’d enter the apartment.

Once inside, the first thing you saw was a double bed to the right, tight against a window with sheer curtains. That bed he thought, if it could only talk, all the times he’d laid there with a severe hangover, napping in the middle of the day, before heading in to work.

There was a closet door immediately to your left. The private dwelling had walls painted a soft sage green, with doors and frames, porcelain white.

Taking another step you’d come to a very short hallway on the left, leading to a tiny refrigerator set makeshift on a wooden sewing machine table and to the right, the bathroom with a toilet, sink, mirror, and a bathtub. He remembered kneeling in the tub every day to wash his hair under the faucet, awkward, but manageable.

Moving back to the main room was the kitchenette concealed in the rear corner behind double French doors. Opening them revealed a culinary alcove with a large sink, hotplate, a few pots and pans, coffee percolator, eating utensils, and some dry goods on the shelves on either side. Aromas returned to him, many years of a struggling actor’s simple meals: macaroni and cheese, oatmeal, spaghetti and tomato sauce, toast with peanut butter, beans, rice, and strong coffee the way he liked it.

There was an old wooden desk with a well-worn armchair. Words could fill volumes of what had been written there. It also doubled as a dining table. Two adjacent windows in the corner were next to the desk. During the 1994 Northridge earthquake, these same windows ballooned out at him like a bull frog’s throat, then–popped right back.

Yes, those windows, the ones he used to look out every morning to see a familiar shape, his VW bus, until that one morning he noticed the shape was gone, stolen in the night while he lay ill in bed with a fever.

In that same corner, another table with a small bookcase containing a few paperbacks, a boom box for music, and a portable TV on which he rediscovered classic reruns: The Fugitive, Combat, The Honeymooners.

Finally came a mirrored bureau along the center front wall where the telephone sat. So many calls and conversations and so many hopes and dreams every time it rang. He did not have many visitors during those ten years, but there was one he remembered the most, a beautiful young woman he was crazy over. He remembered her reaction when she saw the tiny place he lived in, how she smiled. It was not a smile that instilled confidence.

He thinks to himself, how else could he have done it? How else could he have lived if he was really going to do the work: to study, to practice, to really try and get into the industry? He had to have arrangements, ways to cut costs: low rent in exchange for chores and errands for his landlady, irregular jobs to free up his time to do what needed to be done: submissions, auditions, classes, rehearsals, performances.

Christ! He’d hung in for a decade of hard times with nothing to show for it. As he ages, he meets those who never pursued their dream, who went the more stable course. They’re curious and ask him about this and that, “Did you really?” Perhaps it’s not worth much to hang in a fight when you end up losing. But life is a fight, and you can’t always win…oh, that’s history, he sighed. Turning away from the little yellow house, he sat for a moment, then started the car and drove away.

Everything You Need to Know About Accessing Disney Plus 101