Cleopatra inhabits the reptile house at the Bronx Zoo. She is young, and found out the Bronx is not a glamorous place to live. “Oh, I am special. I am a Black Widow. I can kill in fifteen minutes. I am leaving this benighted place.” And she did.

She slithered her way to the 177th Street East Tremont Avenue elevated station and sashayed, I mean slithered up their elevated station stairs. Even in this rough Bronx neighborhood, no one dared say no. The token clerk didn’t dare ask for a fare. Cleopatra traveled first class, because the moment she boarded the subway car, she had it to herself. The police were called, but Cleopatra went undetected.

“I am going to the Plaza, darling. If it is good enough for Eloise, it’s good enough for me. At 72nd Street she slithered out and up to the street and jumped into a taxi next to the driver. The driver, Ahmed Ali jumped in shock. “By your accent, I know you are Egyptian. You WILL take me to the Plaza, peasant, for you know my bite!” “Yes, Madame.” Ahmed drove like a bat out of hell, but this is Manhattan, no one noticed. She slithered out of the taxi, much to Ahmed’s relief. and found a room a maid was finishing. “Oh much nicer than the Bronx Zoo. I will enjoy this. I shall call for room service. 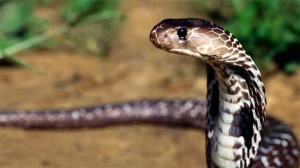 Before she could, voices were heard in the hall. “Mrs. DaVinci, we are honored to have you at the Plaza, this is your suite. The bellman brought her Louis Vuitton luggage in the bedroom with the glamorous Mrs. DaVinci behind him. They both saw Cleopatra at the same time and screamed, the bellman dropping the luggage. “Oh the noise, I was here first and I bite.” “I have a bite too,” Mrs. DaVinci snapped. “Mine kills in fifteen minutes.” The bellman quickly called 911. “The cobra from the Bronx Zoo is in the Plaza on a bed in a room, bold as brass.”

Six uniformed officers barged in the room. Five were queasy, but Officer Deng, a Sudanese Lost Boy made good was not afraid. “Give it up, cobra. You are returning to the Bronx, where you belong.” Cleopatra looked at him. “You bore me, Dinka cattle boy.” Officer Deng was not fazed. He dealt with all kinds of snakes on his childhood journey to safety both human and reptile. He called out to one of his fellow officers, Billy call Animal Control, I will deal with this cobra. I dodged many a snake attack. “Buddy, you think we need a hostage negotiator?” “I want that vile reptile out of my room,” Signora DaVinci said angrily. “Do not worry, no hostage negotiator is needed; Signora, I will deal with her!”

Animal control came in the room which now resembled a crowded subway station. The bellman and the manager were ghostly white. Mrs. DaVinci crossed her arms and pouted. “I am not leaving,” Cleopatra hissed. “I will bite and kill the entire room if I must.” Officer Deng had enough of delays. “Cobra, you have two choices. You return with Animal Control quietly to the Bronx and never leave again…” “Or you’ll do what, herdboy?'” “Simple. I hear the Signora wants a new pocketbook and shoes.” “Oh really, how pedestrian. You came from that wretched place and survived to die by my bite in the Plaza.” Cleopatra was so busy taunting Officer Deng, she didn’t see the Animal Control officer use his tool to grab her by the head and thrust her in his cage.

There was general clapping. When they were leaving, Signora DaVinci threw arms around Officer Deng and kissed him. “My hero!” “All in a day’s work for the NYPD, Signora.” “When are you off duty, Officer?” “I am on overtime, Signora.” “Well darling, I am taking you to dinner.” “Officer Deng’s colleagues exchanged knowing smiles. “He always gets the girl,” one of them laughed. The Animal Control officer muttered. “I risk my neck and he gets all the credit.” Officer Billy O’Connell clapped the Animal Control officer on the back. “We ARE New York’s Finest after all, and our buddy over there is the finest of the finest.” “What am I, chopped liver? Wait a minute, don’t answer that.” The animal control officer left the room with a very angry Cleopatra.

A grateful Plaza Hotel offered Officer Deng a weekend stay. Cleopatra was back in the reptile house at the Bronx Zoo. “Well, all that effort for nothing,” one of the other snake said with a laugh. “Yes, I learned the Bronx is home and they didn’t like me. We are just Bridge and Tunnel folks to them. The visitors stare at us, but this is OUR hood. Peace and security was restored.

In Her Own Words

Legacy of a Leader 4