will be released and no one will be safe!

This is the third book in the Travels to Fahdamin-Ra series by young adult author Chaz A. Young. Chaz Young has been writing for teens for several years after being picked up by Canadian publishing company, Navarone Books. 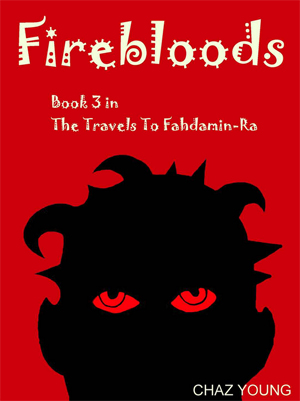 When Young was unable to find exciting stories for her own children that had biracial or African American children portrayed as anything other than victims, her creative spark solved the problem by creating her own series with a couple of biracial teens as heroes. Her first book, Travels To Fahdamin-Ra won honorable mention in the Young Adult section at the Los Angeles Book Festival in April 2011.

In Travels To Fahdamin-Ra, two teens are transported to another dimension where they discover they are descendants of the creator of that world—and are creators themselves. They find that they can do such things as fly, heal people, create living animals from clay, and read minds. Not only are these ‘brown children’—as Chaz Young refers to them—heroes, they are nothing less than gods. In book 2, Across The Savannah, the teen heroes take a difficult journey across a savannah to find some lost people and end up taking on an evil and vicious dictator.

Book 3, Firebloods, the two teens live up to their African heritage as creators and voyage north to the land of the evil Firebloods and find a way to dispose of seemly invincible beings with magical powers of their own.

These days Chaz Young is working on an unrelated book, Cursed. Another new book unrelated to this series, Spellbreaker, a modern fairy tale, is due out in September.

I am a young adult author of books where brown kids are the heroes and not the victims. Besides being an artist, I like to sew and refinish furniture. I spend most of my time writing and hiding from people who want me to hem their pants or re-cane their broken chair seats. You can find me at https://www.facebook.com/home.php#!/ChaztheFahdamin

Home is Where the Heart Begins: Do You Notice?