“Idiot!” Ed Weems mumbled as he slammed the novel on the coffee table and slid his heavy black glasses with the coke-bottle lenses up the bridge of his nose.

Larry Dunlop looked up from his own book and grinned, “They caught him, didn’t they?”

“Of course they caught him. They always do,” Ed replied. “One fingerprint — the guy forgot to wipe one fingerprint off of the light switch — that’s how they got him.” 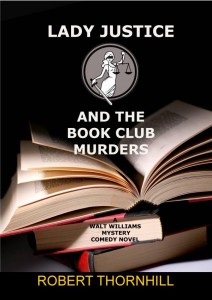 Larry put down his novel and stretched, “I hope you weren’t expecting the bad guy to get away with it. People don’t want the bad guys to win — everyone roots for the guy wearing the white hat. That’s why, no matter how clever the perp is, he always gets caught in the end. That’s what sells books.”

“Well I want to read a novel about someone who commits the perfect crime. Any ideas?”

Oscar Roach had been listening to the conversation with amusement. “Exactly what is your definition of a perfect crime?”

“Well it seems pretty obvious,” Ed replied. “Someone commits a crime and gets away with it.”

“Too simplistic,” Oscar said with a smirk. “There are actually three definitions of a perfect crime.”

“Well, first of all, there are some who believe that in order for a crime to be perfect, it must be undetectable — that it is committed and no one ever knows about it.

“For instance, with my job as an orderly at the hospital, I could steal one pair of latex gloves from every box in every exam room for a month and nobody would ever be the wiser — they just don’t keep track of those things.

“Of course, if no one ever knew that the crime was ever committed, it wouldn’t make for much of a story in a novel.”

Ed was beginning to show interest, “And the second kind?”

“The second kind is the subject of most mystery novels — a crime is committed — the cops know about it, and it becomes a cat-and-mouse game to see whether the perpetrator was clever enough to avoid detection. Obviously your guy wasn’t — he left a fingerprint.”

“Okay, then what’s the third category?”

“The third category is when a crime is committed, the police know who did it, but they can’t prove it.”

“Sure. In 2009, there was a jewel heist. The thief left behind his DNA, which led to an arrest. Unfortunately for the police, the DNA was from identical twins. Neither of them would talk, so it could not be proven beyond reasonable doubt which twin was the thief.”

Ed was impressed. “You seem to know a lot about this subject.”

“I’ve been looking into it.”

Oscar paused before he spoke, “Because I’m going to do it.”

Ed was taken by surprise. “Do what?”

“What the hell are you talking about, Oscar?” Larry asked. “You’re a middle-aged hospital orderly for chrissakes!”

“My life is pathetic and so are yours — and so is this stupid club.”

“What’s so bad about our club?” Ed asked indignantly.

“Do I really have to spell it out? We started out with ten members and one-by-one they’ve been dropping away — mostly because they’ve found something better to do with their lives — like Liz, who moved back to Columbia to finish her degree at MU.

“All that’s left is us losers.”

“Hey, speak for yourself, you jerk!” Larry retorted.

“Oh please, Larry. You’re a forty-year-old custodian in a middle school who spends his day cleaning up after snotty-nosed kids, and Ed, you spend your life in a cubicle doing data entry into a computer for an huge accounting firm that doesn’t even know you exist.

“When was the last time that you did something REALLY exciting — something that made you feel like you were living on the edge?

“When was the last time you got laid — or even had a date?

Neither of them responded.

“Don’t you think committing a crime is a bit extreme?” Ed asked. “Wouldn’t it be more logical to plan a canoe trip or maybe a weekend at Branson?”

Oscar shook his head in disgust. “Nope, an evening with Andy Williams is not my idea of living on the edge — it has to be a crime — and not just any crime — murder.

Ed and Larry were speechless.

“But — murder!” Larry stammered. “I could never kill someone — not on purpose anyway.”

“It’s not that big of a deal,” Oscar replied. “I see people die at the hospital every day. Look at the obituaries in the Kansas City Star. Dozens of people die every week.

“I’m not talking about killing the Mayor or somebody like that. The streets are filled with the homeless and prostitutes. Their lives already suck and we would be doing them and the city a favor by getting rid of a few.

“Think of the challenge. We each have read dozens of crime novels and watched countless TV shows. We know what we have to do to commit the perfect crime. All we have to do is create our plan and execute it.

An excerpt from Lady Justice and the Book Club Murders

Robert Thornhill has hit it again! This time Walt Williams and his partner, Ox, are on a mission to stop a killer who commits the perfect crime.

It’s a fast-paced Thriller which leaves you thinking; exactly what does it take to pull off the perfect crime and not get caught?

Fantastic page-turner written with a bit of humor and a thought provoking plot.