Keiko slowed and hovered over the relic on edge of a blanched plain. Eileen joined the flurry of crew activity. She pressed against the porthole and scanned the ocean floor.

They had found a wreck, but how would it be relevant? 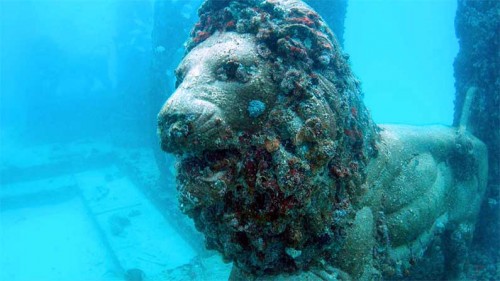 When Kiichi flipped on full power, the floodlights cut through the murky waters and reflected off the barnacle-encrusted hull.

“Do we know what ship it is?” Nishihara slid his gold-rimmed glasses up his nose. “Can we find this place on our chart?”

“We’re traveling along the western edge of the Izu-Ogasawara Trench,” Kiichi said.

Eileen stared at the rotten wood as it appeared from the edge of a impact crater. When did it sink? How? “This might be the remains of an ancient trading ship or one of Cheng Ho’s armada.”

“If it’s a wooden ship,” Nishihara said, “it could go further back to one of Kublai Khan’s.”

“The Mongol Dynasty ended almost 700 years ago,” Wulfstein said when an endless procession of silvery trays, copper kettles, porcelain plates and bowls, bronze gears, and capstan crowns appeared—some lying one on top of another, others covered by barnacles and sand—all polished by a relentless current. “And their ships were made from wood.” He keyed commands into his laptop and the screen registered splintered images from the monitors: position of plotline, depth and time.

Eileen stood, transfixed as a corroded ventilator shaft appeared, followed by a rusted stern and its rudder protruding outward. Soon, twisted pipes gave way to heavier metals. “This looks enormous,” she said. “This must be a modern craft.”

“It is,” Yoshino said. “This might be a cruiser or even an aircraft carrier.”

“I’ve heard of that ship,” Eileen said. “It was much larger than the Titanic.”

Wulfstein tapped the keyboard. “Berge Istra sank in 1975 over the Mindanao Trench. Two surviving crew members testified they’d heard explosions before the ship went down.” He entered further commands into his computer, and an outline of another ship appeared, the Berge Vanga. “Three years and ten months later, her sister ship also sank.”

Kiichi guided Keiko above the wreckage.

“The Berge Istra is a marine mystery,” Wulfstein said. “Its 228,000-ton displacement exceeded all those ships that disappeared in the Bermuda Triangle. Both this and its sister ship were owned by the same company, built in the same shipyard. They even traveled the same route but no trace of the wreck has ever been located.”

Eileen marveled at the remains. Iron implements jutted out like petrified fingers—anchors, grommets from pulley blocks, mortars and fragments of glass-faced instruments. Scattered all over, metallic rubble and huge sheets of a riveted hull-plate appeared, a graveyard for ships.

“Look!” She pointed toward the deck. “The right side has protruded upward.”

“What does that mean?” she asked.

“I don’t know,” Wulfstein said, “but let’s check the portside.”

Kiichi complied, guiding the sub to examine the left hull.

“It appears something had rammed the starboard,” Wulfstein said.

“What could have caused them to sink?” Eileen asked.

“The Norwegian owner had maintained secrecy over their sinking to this day,” Nishihara said.

“What makes you think so?” Eileen asked.

“We have heard they smuggled gold ingots among the ore they carried from Brazil to Japan. And some pirates must have known their operations.”

Yoshino turned. “So there could be a chance of high drama at sea?”

“That’s right,” Nishihara said. “Things must have gone out of control, and there must be a chance of finding some ingot here.”

“But these pirates might have been here before us,” Eileen said.

“This couldn’t be true,” Yoshino turned to her. “This is just way too deep for any pirate to reach. And how could they sink such a ship even if they want to?”

More debris drifted across the video monitors. We have a damn discovery! Eileen gripped the porthole handrail and stared at Nishihara, whom she suspected, had been dwelling on the lost riches of the sea as another wreck emerged— sails, poles, masts, anchors, cannons and cannonballs—covered with barnacles, many resting upright, others upended.

Keiko’s light picked up different shapes and sizes of Chinese vases, a hundred rusting objects laid beside modern ruins. Others, not so old, reflected the glare of the searchlights on their ironwork and copper hulls.

“The Kaiyo Maru—” Byron pointed to another site.

“Kaiyo Maru No. 5,” Wulfstein said. “New ships jumbled among the old, all dumped at the same site.”

“Why here?” Eileen asked. This discovery would stun the world! “How could this happen?”

“We’re right above the faultline,” Byron said. “And the plates might plummet in jerks, releasing gas trapped beneath.”

“This doesn’t make sense,” Eileen said. “The release of gases may cause a ship to plunge, but how does this explain the disappearance of Kaiiko?” She knew some ship sinking could be caused by methane gas. Its upsurge would reduce the specific gravity of water, rendering it unable to support the weight of a ship. But how could this explain the Hornets being sucked out of the sky?

Eileen recalled a research paper she had typed for her late husband who had presented it to Professor Wulfstein: From 1949 to 1954, ten large fishing vessels and coastguard cutters vanished without a trace, including the Kaiyo Maru No. 5.

“Charles Berlitz’s speculation is worth looking into,” Jerry had written. “There is something bizarre about the Ma-no Umi.” His idea of a mysterious beast roaming in this area was considered far-fetched by his colleagues. And his presentation to the scientific community had drawn intense criticism.

“Another name.” Eileen pointed at the video screen. “Taiho.”

“This could give us a clue to the lost ships,” Kiichi said. “I can see typhoons traversing the sea above, sinking these ships so fast they couldn’t send a message.”

“The ship’s equipment might be damaged by a typhoon,” Yoshino said. “But this contradicts evidence. Crewmen reported explosions, so we know this doesn’t make sense.”

A feeling of awe descended among the crew as they fell quiet. Byron and Nishihara looked on with wide eyes, but Yoshino and Wulfstein cringed back from the portholes.

The Sensei kept silent for a long moment, looking as if he was trying to peer ahead into the black depths. Finally, he said, “Let’s go.”

Kiichi stomped on the pedal and the sub accelerated. Enthralled, Eileen recorded its coordinates and watched the rusty railings, chains and stanchions.

The skipper complied, slowing the sub to a stop.

“Have any of you noticed something odd?” Wulfstein asked.

Eileen joined the Professor at the porthole. He’s damn meticulous! Every details he seems to notice.

She nodded. “I see what you mean. It looks like an explosion.”

“No, Eileen. If it’s an explosion, its hull would have been torn outward.”

“It’s either a rogue wave or a seaquake then,” she said.

“Not a rogue wave. Not a seaquake.”

Eileen shook her head. “Not even a torpedo?”

“The entire hull bends inward,” Wulfstein said. “If it was a torpedo, the damaged areas would have sported sharp and pointed marks.”

“Have we missed something?” Yoshino interrupted. “Let’s go back and reexamine the whole wreckage.”