The Objective: The circumstances are in my favour. Overcast skies and marsh gas mixed with early morning mist and plenty of cover.

I scan the derelict house with my binoculars. I know my quarry is holed up somewhere inside; all the signs I have seen tracking him here, point to it. 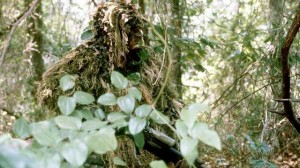 He is tired, worn out, and maybe careless, but still arrogant. Sooner or later he will begin to taunt me, to challenge me.

Despite the gloom, I can see an old dead tree trunk protruding through the opening where the front door had once been. The rotting remains of a boat still cling to the shore courtesy of a threadbare rope wrapped around a stump in the swampy no man’s land between water and solid ground.

When the sun finally shows through the thick cloud cover, there will be moments when its rays could reveal my presence to him, despite my Ghillie suit. To find a better vantage point in this flat scrub country is out of the question. I adjust the rifle camo to mask any optical glare from the front lens of the scope mounted on my M-96 semi-automatic.

Yes, I hear you – I totally agree that using a 50 calibre sniper rifle is overkill at less than one hundred yards.

But my quarry is an animal, no, lower than that! He always wears some form of body armour, and his reputation for brutality and extreme violence towards anyone unfortunate or foolish enough to be captured by him is a legend.

I double-check the magazine – four rounds plus one chambered – only need one.

The first rays appear. I shift sideways to take advantage of the cover offered by a thickly branched thorn bush.

Within another five minutes, the increasing intensity of light from the rising sun backlights the house, throwing its front wall into deep shadow. Along with the increase in daylight comes the increase in wind, a factor I have to consider even at this relatively close range.

Soon he has to make his move. He knows I’m here – he has to!

I unfold my rifle’s bipod legs and tuck the butt into my shoulder while releasing the safety catch. As my eye grows accustomed to the picture held within the scope, I watch, hardly daring to believe what I am witnessing.

Unbelievable, he is actually climbing onto the roof!

He strides forward and stops on the apex above the front wall challenging me, legs apart, arms stretched out to his sides in an arrogant crucifix pose.

I slow my breathing as I make adjustments for magnification, and for the slight easterly wind. My finger rests alongside the trigger as I focus on the sweet spot at the bridge of his nose.

I see his headless body thrown backward by the impact, almost in slow motion, before my ears register the faint sound of the 50 calibre round striking its target, disintegrating bone.

I rise to one knee and retrieve the spent cartridge.

I Watched The Sky