An elite FBI task force tracks online predators while they hunt their prey. A series of murders in Presario Heights has forced Special Agent Jessica Resario to follow her gut instinct to save the next victim. Supervisory Special Agent Tom Erickson removes her from the case. The only place to escape the danger is her family beach home. She hadn’t been there since her parents were murdered.

The level of intensity climbs higher with her discovery of postcards marked “I Crave You”.

Old ghosts, secrets, imminent threats and an inevitable attraction to Tom send her on an emotional rollercoaster. If that wasn’t enough, she opens the door to a man she thought was dead.

Tom is stabbed, and his case files go missing…high emotions put Jess at the killer’s mercy. 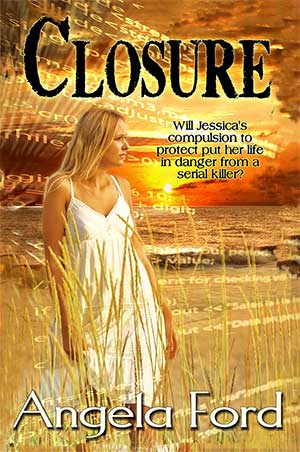 Excerpt
Tom didn’t look up from his phone. He wasn’t just worried about Jess’s safety because she was his best agent. His heart ached for her. He missed her. Working with her every day was all he had, but it would have to do for now. He understood all too well the pain she carried from her loss and how she’d distanced her heart from any emotional attachment since the tragedy. He’d emotionally detached himself from the world too. The lost marriage and the lack of a relationship with his daughter made his heart closed for years. Tom was undeniably attracted to Jess. The slightest glance or accidental touch ignited a desire that burned deep. Both of them carried hurt and threw themselves into their work. Up till now, working together had been enough.

Chapter One
Jessica Resario held her finger firmly on the trigger and waited in the dark, listening to the echo of footsteps on the stairs.
“Remain focused Agent Resario,” she reminded herself.
When the bedroom door flew open, she sucked in her breath.
A dark figure appeared. He wore a balaclava, so the only part of his face she could see was his eyes, but she could tell by the surprised look in them that he didn’t expect to see her. “Jessica!” he exclaimed.

She needed to remain professional, although she wanted to ask him how the hell he knew her.
He gave her a cocky smile and lunged forward. She went down hard. The gun flew across the room. She jumped up and ran to the top of the staircase. Only inches behind her, he grabbed her arm. His fingers twisted so powerfully she felt a fierce burn on her skin. With only seconds to act, fear-driven strength crafted the thrust of her raised knee. She stunned him long enough to shake free of his hold and sprint down the stairs. She reached for the front door and swung it hard enough to make it slam against the wall. She hoped the loud bang and the open door would lead him outside. She ran into the living room.

He reached the bottom of the stairs with only the open door in sight. She breathed in relief; the open door led him outside into the darkened night. Cramped in a tight area behind the sofa, she gently pulled the heavy drapes back just a small crack and peered over the window ledge. She could see nothing but the shadows of tall trees and beyond, an empty street. No sign of a person. Not even a dog barked.
Is this how my life will end—alone? She wondered.

Suddenly reality hit her. She let no one in. Brave at work, yet in her personal life, she didn’t have the courage to confess her true feelings to Tom. The murder of her parents ten years before kept her from loving, for fear of losing again. All she had was her work, and her work put her life into the hands of a serial killer.
Is he gone? She wondered.
Jess crawled a little farther around the sofa, her knees trembling. She moved slowly, listening for a footstep or a breath taken; she needed a better look. Gently pulling herself up and the heavy drapes open, she peered with one eye over the window ledge. It looked as dark outside as it did inside.
Who is he? She wondered. How did he know her?
Is it safe to leave? She knew she had to get out of there.
Her legs cramped, and she shifted her weight, and then stifled a cry of pain. She’d lost her footing when she fled and missed the last couple of steps. Shaking in fear, she felt pain in her leg. Jess fought for air.

Where is he? Her eyes tried to focus in the darkened house.
The front door was still open, about ten feet away. She rose again to have a better look around the drapes, but nothing could be seen except dark shadows and a quiet, dimly-lit street. She stood up slowly from that tiny area, and adjusted to the darkness, then limped to the front door with her hand holding tightly to her bad leg. Her purse was still where she’d left it on the deacon’s bench in the front hall. Her car was still parked in the driveway. She walked out but didn’t close the door. Jess nervously scouted the outside area for him, and clutched her purse in one hand as the other dug inside it for her keys.
She unlocked the car door, slipped in, then, with trembling hands, she keyed the ignition. For the first time, she could relax. Clearing the driveway at last, she asked for “home.” The car’s device dialed the number. Home for Agent Resario was her boss, Tom.

“Jesus Jess, I was worried!” Tom’s anxious voice came over the speaker.
“I’m still breathing,” she answered as she tried to remain the strong, independent woman she portrayed to her team. She held tightly onto the steering wheel to keep her hands from shaking. This time someone got under her skin. She’d not yet learned to follow the protocol. She did things her way instead of the Bureau’s way. She had taken another long shot, and “followed her gut instinct,” as she called it. It was fortunate for young Rebecca Smythe though. Jess saved the girl from becoming victim number four.
“At least you’re still breathing.” His tone seemed genuine. She knew it was more than that. She’d felt it for a long time. To Jess, to the team, to the world, he remained silent. He appeared solid, professional and almost cold-hearted—or so he thought. She remained silent as always, in denial of his love and her own. She realized she’d let her thoughts wander and switched her focus back to the case.
“My hunch was right. He went for her and got me. She and her parents cleared out before he arrived. They’re safe. It was dark, he was in black and a balaclava, but I think he recognized me. He called me by my first name.”
“I want you to take cover for a day or so. You know where to go?” Tom said.

DEDICATION
Dedicated to my sister Cathy, You have been my inspiration to read and write 🙂
And to my amazing children, Devon & Shaylyn…mummy loves you xoxo

Angela Ford works for Public Education and lives in Ontario, Canada with her two children. Being a mom has always filled her home with teenagers - her social network mentors. Angela is passionate about education. She has been dedicated and involved with cyber safety seminars. Her community involvement has given her an Award of Distinction.The quiet moments she does find allows her to plot to intrigue her readers. She is a member of the RWA and an avid reader of Romance.
You can follow her at www.bookstogonow.com or visit her website at www.angelaford.net