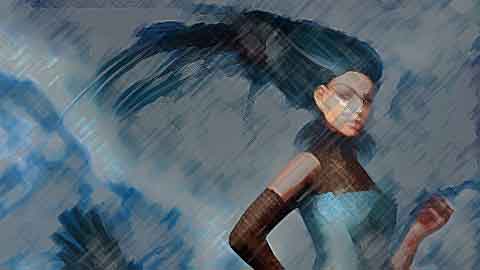 We traveled in Carlisle’s Mercedes. The library was surprisingly huge and looked like the White House. Carlisle immediately excused himself and headed off to the medical section. He’s very devoted to this field of work. Amalina rushed off to the science and technology section. Tyng and I went from one rack to another. We were flipping through some old, worn-out books when we stumbled upon a dictionary.

“Maybe it’s nonexistent in Elvish,” Tyng said and shrugged. She blew her nose again. “Let’s check another,” she added. The result was the same. Nothing. “Try the word ‘find’?” I suggested. Same. Nothing. We even looked through the thesaurus. “Why don’t they have the word? Aren’t elves supposed to be much more knowledgeable than Einstein?” Tyng said and frowned deeper when she accidentally got a paper cut.

The aurora was very bright. Everything was dark because Pogue killed the engine of the Hummer to savour the moment. “Embracing nature,” Emmett said. All of us kept silent for a while. I heard the whistling again.

We stayed a while longer before deciding to return home. Damien just called Pogue to check on us with his cell. “Time to go. We are wanted,” Pogue announced and opened the door to the driver’s seat.