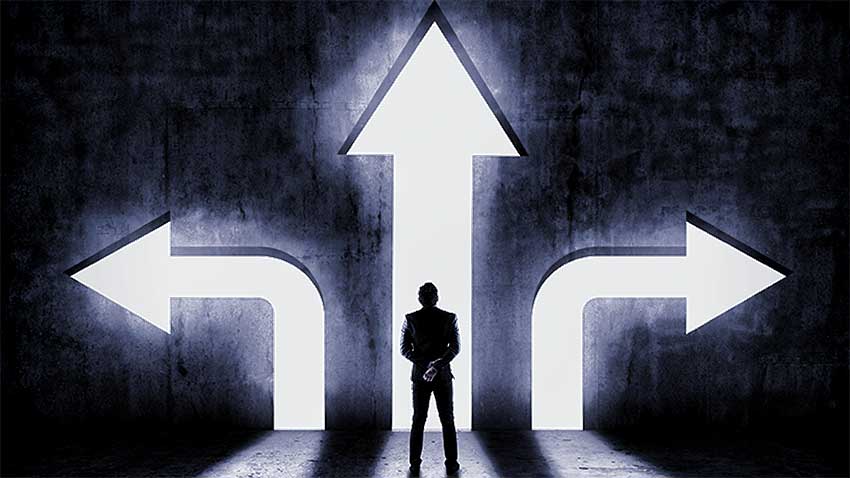 The biggest illusion in a person’s life is that things just happen; that one has no control over the events that unfold in one’s experience.

That is a lie. Every thought, positive or negative, creates our experience. Life presents us with options based on the choices we are ready to make.

? What is opportunity? In my experience, it all boils down to one thing: choice, making decisions.

They say that hindsight is 20/20. Therefore, in retrospect, I can see that I did not feel like I was choosing any of the events that unfolded in my life. Even though at some level, I knew that I was the one orchestrating every single move, both literally and figuratively. What I felt was that I had lost control over my life and that the more I tried to grab on to what I had known to be accurate, the more slippery the slope got and the faster I was going down the rabbit hole.

During the past two years, I have been frequently reminded of the movie “Cast Away.” In this movie, Tom Hanks’s character finds himself in a rather interesting predicament. His life as he had known it had drastically changed. A freaky airplane accident had left him on a deserted island for four years, and – upon being rescued – he realized that his life as he had known it no longer existed.

In the last scene of the movie, he finds himself at a four-way crossroads – at the field of infinite possibilities, if you ask me. He had choices in front of him. He could make any. What would he do? The viewer is left with that decision.

Who could argue that the accident happened? That, we might call fate. The choices he made dictated the rest of the story, some fear-based, some strength-based. Conviction and taking his destiny into his own hands was the final choice.

Before Leaving My “Island.”

My so-called misfortune did not end the day Bello died, nor did it end the day I had to move into a hotel room with Newton in tow after leaving two houses in the span of just a few months. Unbeknownst to me, the field of infinite possibilities was presented to me with one blow to the head after the next. I would be brought down to my knees before I could stand on my own two feet again. After surrendering my dog, my home, and having to move into a hotel room, I lost a high-paying job and was forced to return to my son’s couch. This time around with no moving date in sight.

Of all the losses I experienced in the span of nine months, losing that job was the one that knocked the air out of my lungs. That incident took away the little bit of confidence that I still had left in me. I was homeless and jobless in a foreign country and unwilling to continue to fight for things that no longer held any value for me. I ended up giving away the rest of what I had held on to in terms of property and decided to keep one being: Newton.

What was the “accident” in my life that put me on my private deserted island? What happened that it took me so long to build the strength to let go of what no longer served me? What were the decisions I had made that had created a reality that I now found myself in?

Events were set in motion that I could no longer stop, nor did I want to. I spent a month sleeping on my son’s couch while I tried to pick up the pieces of my life. Finding employment proved to be one of the hardest and more devastating items on my daily to-do list, mainly because I could no longer define what I would like to do with my career. At age 50, I was lost and without a map for the first time in a very long while. My compass seemed to be broken, and I could not find my North.

The next few months felt even more insane. I had a short trip already scheduled for Puerto Rico to celebrate my mother’s seventieth birthday. After much consideration, I bought a one-way ticket to Puerto Rico and decided to surrender to what I could no longer control. The plan was to stay only for a week or two, but I did not want the pressure of having a return date.

I spent my time in Puerto Rico breathing in a way that I had not been able to breathe in a long time. I had new decisions to make. By feeling stripped of my roadmap, I had an unusual opportunity in front of me: I had nothing to hold me anywhere. I had no job, no house, no furniture, nothing. I could start anew anywhere in the world.

A one-week vacation turned into six weeks of flowing, of deciding on the fly what I was going to do next, and of meeting with people I had not seen in a long time. Flowing meant saying yes to so many requests for my time that I was not sleeping more than a few hours every night.

I danced for the first time in years and met a man with whom I spent many hours and whose company I enjoyed without the strings that one usually attaches to relationships. I was leaving. I did not know exactly when, but I knew I was. That realization gave me the freedom to not make plans for the future and to enjoy the time I had with him. That relationship had an expiration date from the moment it started, and I was okay with it.

The realization that that was the case did not lessen the gift of that relationship. He unknowingly saved me. He gave me something to hold on to while I sorted through the debris of my life. The day I left to go back to California, he took me to the airport, and I knew it in my heart that that was the last time I would see him. I had bought another one-way ticket and did not have a return date in mind.

I would be proven right. He did not love me, and it did not matter. I have not seen him again, but I will forever be grateful to him for the gifts of laughter and dance.

Leaping Without a Safety Net

The rabbit hole that I had found myself into was sucking me in one direction: Puerto Rico. I recognized that I still had responsibilities in California, which included picking up my dog and saying proper goodbyes to my son, his wife, my grandchildren, and my friends. I had felt so alone for such a long time, and now I had a full schedule of goodbyes ahead of me.

I leaped without a job and with only three suitcases in tow. Once in Puerto Rico, I found myself in deeper waters

: I could not find a job to save my life. Job titles continued to be relevant to me, as did the high salary that I was used to. What I found out startled me, though. My credentials scared people in charge of hiring and finding a job became the hardest part of my transition.

Newton arrived in Puerto Rico two weeks after I did. He was not happy, and it took him a long time to readjust to the heat of the Island. We were both melting. He is better now.

Seven days after I moved to a new home that I have inhabited since I returned to the Island, my daughter arrived at my place with a sick, starving, abused dog she and her friend had found in a parking lot. I had sworn that Newton would be my last dog.

Stella is a Pitbull. She must be a little over a year old now. Bello, I have mentioned, was a Golden Retriever.

The other day, as I was editing this story, I sat at a café where I go to work, and someone’s child sat with me as he usually does when I am there. He has been diagnosed with all sorts of physical and mental delays. My experience working with children and families comes in handy when I sit with him.

My computer desktop shows the photo of Bello that serves as the cover of the first installment of this series of posts. The child asked who that was, and I told him that it was my dog that died. What he said next brought me to tears. He told me, “You know that that dog and Stella are the same dog, right?” When I asked him to elaborate on his statement, he replied that he knew that my dog was dead but that he was not “because Stella is the same dog.”

The past eleven months have been a reminder of the power of conviction, of that of trust, and, more importantly, of the power of stating precise desires, doing one’s part, and allowing Life to take care of the details.

Just like that Hanks’ character, I stood at a crossroads where all paths were viable, and I had just one job to do: choose. Following my trusted choice, I have been incredibly surprised by how life has orchestrated the events that have brought me to this place at this time in my life.

Financially, I am broke. But I am free. And, for the first time in years, I can see the future. Hope is on my side. I am building my own company from the ground up. I am writing again, and I am witnessing my work circle around the globe. Opportunity has a sense of humor and, today, so do I.

When someone makes a decision, he is really diving into a strong current that will carry him to places he had never dreamed of when he first made the decision.
~ Paulo Coelho, “The Alchemist”