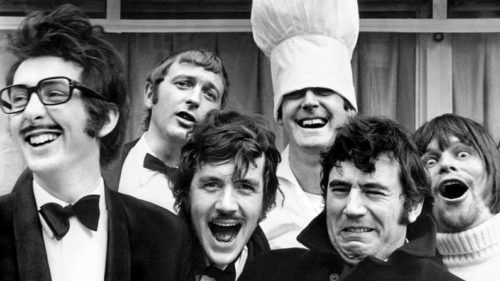 Eric Idle had great fun with that.  He mentioned Sharpe James, but asked if he was sharp?  That got some laughs.

This is important because Phoenix comes up.  Hey, I don’t know what wisecracks about Tucson they may have made, but that’s an aside.  As I stated, Mesa, is still Maricopa County, home of the Maricopa County Sheriff’s Department and soon-to-be ex-Sheriff Joe Arpaio.

Foreigners?  They were lucky to escape tents and pink underwear, though Sheriff Joe was defeated in the election.

They were able to escape down Interstate 10 to Tucson.  To the best of my knowledge, Sheriff Joe doesn’t have warrants out for them.  They made it on the Butterfield Stage past the Apaches, sorry that would be Tombstone.  I’m waiting for the Graham Chapman letter Dear Sir, silly just silly!  Sorry, I’m a writer, I have my flights of fancy.

What made the evening fun, was not just skits, but the history and the asides.  They talked about working with David Frost pre-Python.  The play ended in New York stranding John Cleese.  See, no matter what we do, will no one, but no one rid us of this meddlesome Cleese?  Yes, I’m playing with the English Language.  I’m not as good as Winston Churchill, my hero and the master of the English Language.

I enjoyed the Fish Dance skit when John explained how the water dropped in the lock. Michael Palin is always a good guy.  In Arizona though, they would have had to do it on the imported London Bridge at Lake Havasu.  How many times would Michael Palin have to be dropped into the lake?

(Thanks to London Bridge, Lake Havasu is the second biggest tourist attraction in Arizona, after the Grand Canyon.  As the comment in the Holy Grail about Camelot being just a model, the Grand Canyon is just a giant sinkhole.

There I said it.  What’s wrong with Tucson?  We have Mission San Xavier.  We have casinos, the Congress Hotel; John Dillinger was captured in.  Is it our fault Indiana let him go again?  We have the University, shops, museums, and a new sleek streetcar).