“Grief: The Great Yearning”, the book about my first year of grief has finally been published. I wrote this article during the summer following my life mate/soul mate’s death, long before I ever knew my writings about grief would be published, but with the addition of the last paragraph, it made the perfect introduction to the book.

Death came in the spring.

At the beginning of March, the doctors said that Jeff, my life mate—my soul mate—had inoperable kidney cancer and that he had six months to live. He had only three weeks. We’d spent thirty-four years together, and suddenly I was alone, unprepared, and totally devastated. I couldn’t even begin to comprehend the wreckage of my life. It wasn’t just he who died but “we.” There was no more “us,” no more shared plans and dreams and private jokes. There was only me. 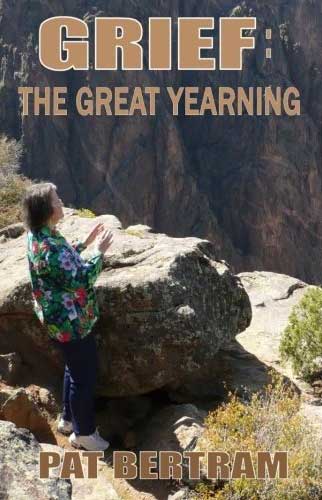 Other losses compounded the misery. I had to sort through the accumulation of decades, dismantle what was left of our life, move from our home. We bereft are counseled not to make major changes during the first year after a significant loss—one’s thinking processes become muddled, leaving one prey to faulty logic and rash decisions—but I needed to go stay with my father for a while. Although he was doing well by himself, he was 93 years old, and it wasn’t wise for him to continue living alone.

I relocated from cool mountain climes to the heat of a southwestern community. Lost, heartbroken, awash in tears, I walked for hours every day beneath the cloudless sky, finding what comfort I could in the simple activity. During one such walk, I turned down an unfamiliar city street, and followed it . . . into the desert.

I was stunned to find myself in a vast wilderness of rocky knolls, creosote bushes, cacti, rabbits, lizards, and snakes. I’d been to the area several times during my mother’s last few months, but I’d spent little time outside. I hated the heat, the constant glare of the sun, the harsh winds. After Jeff died, however, that bleak weather, that bleak terrain seemed to mirror my inner landscape. Wandering in the desert, crying in the wilderness, I tried to find meaning in all that had happened. I didn’t find it, of course. How can there be meaning in the painful, horrific death of a 63-year-old man? I didn’t find myself, either. It was too soon for me to move on, to abandon my grief. I felt as if I’d be negating him and the life we led.

What I did find was the peace of the moment.

And so went the seasons of my soul. The spring of death gave way to the summer of grief, and grief flowed into the fall and winter of renewal.

Grief: The Great Yearning is not a how-to but a how-done, a compilation of letters, blog posts, and journal entries I wrote while struggling to survive my first year of grief. As you journey through grief, I hope you will find comfort in knowing you are not alone. Whatever you feel, others have felt. Whatever seemingly crazy thing you do to bring yourself comfort, others have done. And, as impossible as it is to imagine now, you will survive.

Grief: The Great Yearning is available from Amazon, Second Wind Publishing, and in various ebook formats from Smashwords.