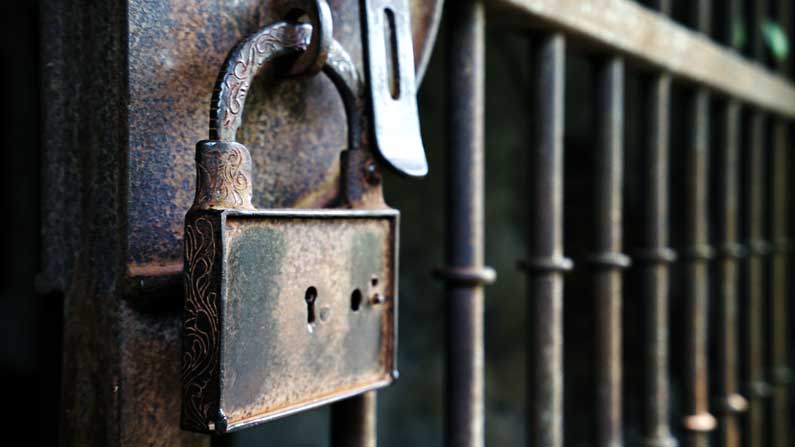 I contemplate the worn frame of the mine entrance, built into the cut-away rock. The rough door sits askew, sagging off its hinges. A rusted padlock hangs open.

I pull the key from my pocket and roll it between my fingers.

“It’s not for this lock,” Uncle Patricio says.

One look at the padlock and I know this. My key is too large, the shaft too round. It’s for something else—something inside that mi tío is leading me to.

Shrugging, I pocket the key, unhook the padlock, and grip the heavy door with both hands. It screeches when I shift it. My head whips around in alarm, out of habit.

“Got good ears, whoever heard that.” My uncle, the funny man.

I frown and turn my attention to the door, grunting as I attempt to heave it open far enough to be able to squeeze inside.

“I really could use your help here.” I wipe sweat from my upper lip and catch my breath. “You should’ve put off dying until after we did this.”

Uncle Patricio snorts. “That was the original plan.”

I stop and stare through him. “Seriously?”

“But, you know, the Man upstairs had other ideas.” My uncle’s ghostly finger points to the sky as his form retreats to hover just off the edge of the socket’s ledge. “Still, it’s probably safer this way. C’mon, chico, get in there.”

One more heave of the door and the space is wide enough—for me, at least, but not a fully grown man. This gives me an unexpected rush of comfort.

Mi tío, a vapor, streams in. With one final glance at the desert, I toss my bundle of supplies into the blackness of the mine and duck in behind it.

We move abreast, Uncle Patricio and I, but only I set years of dust and grit to swirling. The column of daylight that ventures inside with us wanes, dissolved by the darkness and lapped up by support beams.

We are encased in utter blackness—blacker than a moonless night beneath a forest canopy, blacker than a windowless closet. This kind of blackness takes on a solid form that presses one’s eyeballs into their sockets.

“It’s dark,” I say, reaching my right hand out to the side as if I could dig my fingers into my uncle’s arm.

I assume he’s joking, but something makes me reconsider. What do ghosts perceive? “I have no light.”

“Don’t you remember what it’s like in the dark?”

“I will tell you where to go. It’s on this level and not far—”

I right myself and cough from the musty air. My voice echoes and I make out hollows and walls. When I reach out, I touch steel girders with rivets. I step carefully, as I seem to now be following a rail cart line.

“Quit yer bitchin’, chico. Makes you sound like a pussy.”

With my left hand on my stomach, right hand on the wall, lurched over, I keep going. I can barely think, but something at the back of my mind is fighting its way through slop, trying to get the information to me.

I know that smell. Before I can think from where, my spine turns to ice and I’m tingling all over. I know it from recently.

My foot propels into something not entirely solid—a sack, I realize, as my momentum drapes me across it.

The smell is so retched I nearly pass out. It’s the source. But what is it?

Paralyzed by nausea, I want my uncle to lift me out by my arm, but of course, that can’t happen. I have to keep my wits about me.

My ears seek his voice to keep me grounded, give me instructions, take me away from this horror.

I flail about and latch onto a wooden beam, clutch it, and swing myself clear of this . . . pile. I’m on my knees in the dust convulsing and retching, my mind sifting for the answer, yet not wanting to find it.

“That was my oversight, chico. I should have warned you sooner.”

“Hey, I’m new at this deadness thing,” he states as if inspecting a hangnail. “I’m only just beginning to realize how slow and cumbersome you living entities are.”

I’m sweating and hyperventilating and he’s on a personal journey of discovery. Don’t let me distract you or anything, Uncle Patricio. I only need to get out of here!

I shake my head, roll my eyeballs against the darkness, and strain to get to my feet. I’m in this on my own.

I flick my hand out into the air. He can probably see it, or sense it, which saves me some words.

The sack is many feet behind us before I can speak. “What the hell was that?”

“It’s not really open for discussion.”

“Whose?” My voice is a pinched, forceful whisper. I am not in the mood to disturb the world of darkness any more than we already have.

“It’s of no consequence to you . . .” He trails off as if checking for something. “Unless they’re still here.”

“I wonder where they are.”

And then it hits me. If mi tío can exist…