At seventy years of age, he knew that this field trip to the pacific coastal jungle of Colombia would in all probability be his last. David had devoted his entire academic career to the study of poisonous frogs like Phyllobates terribilis, the Golden Dart frog, and in particular the alkaloid batrachotoxins they exude from their skin for protection from predators. In the restricted world of academia, David was the acknowledged expert in his field. 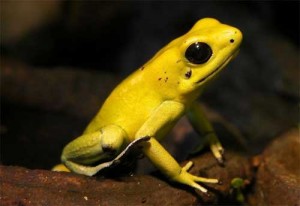 Within an hour Diego had steered his Jeep Cherokee through the crowded streets of Bogota and finally west to the pristine jungle both men loved. By nightfall they sat beneath the awning of their laboratory tent listening to the sounds of the jungle after one of Diego’s excellent meals.

The next morning Diego silently entered David’s tent at dawn and left a steaming mug of boiling hot coffee on the upturned box beside David’s camp-stretcher. Diego knew from long experience that the smell of the freshly brewed coffee wafting past David’s nostrils was by far the best way to wake his old friend up. David abhorred alarm clocks and being shaken. He had some bad news for his friend, and it was better that David received it fully awake and in a good frame of mind.

David soon appeared refreshed after a good night’s sleep and joined Diego in the laboratory.

“Pollution has finally reached this area mi amigo. I took some water samples last week and the results are very bad. The heavy metal traces are off the scale!”

“But I thought our recommendations on the consequences to the environment and the wildlife had become law?”

“Si, what you say is true amigo. But unfortunately corrupt politicians taking backhanders in return for favours and re-election, means that while it is now illegal, little is done. I’m afraid that even though a lot of lip service is paid in public, corruption rules!”

David sighed and shrugged his shoulders. Both men knew that in the great scheme of things a few frogs meant nothing to the average politician, corrupt or not.

To reinforce their argument, they now had to find fresh evidence.

Diego led the way to the now heavily polluted stream. Apart from a faint metallic odour, everything appeared normal. Heading towards the tiny
patch of undergrowth where they knew Phyllobates terribilis dwelt, they quickly began locating the few members of the tiny colony of frogs.

One by one, samples were taken of each frog’s alkaloid batrachotoxins and blood along with minute skin scrapings, each carefully stored and labelled in individual phials for analysis back at their makeshift laboratory in their camp.

Both men worked long into the night conducting every known test. Two things clearly stood out. The frog’s DNA had been irretrievably altered along with their reproductive systems. There was now no doubt. Phyllobates terribilis had evolved into a new member of the genus.

Diego drove David back to Bogota’s International Airport. Their preliminary findings had to be rigorously studied, published and presented to
the world.

As David pored over their findings on the return flight back to his home in the US with the precious phials, beneath him in a western suburb of Bogota a woman called her cat inside. The cat came running when it heard its name, greeting its mistress by rubbing itself against her legs and licking her face when she picked it up before tucking into its meal of fresh fish.

Beneath Bogota’s chief hospital, the country’s senior pathologist hardly knew where to begin. The woman who lay on the slab before him looked more like a robot than a human being.

She had been found in bed with her faithful pet cat lying next to her. Both had died an agonizing death completely paralyzed, unable to move thanks to their nervous systems inability to transmit impulses leaving their muscles in an inactive state of contraction as their individual DNA was altered for the final time.

The pathologist’s assistant observed that the cat looked like a child’s wind up tin toy. He decided to conduct an autopsy on the metal-like cat while the pathologist began his preliminary visual findings of the unfortunate woman.

After eventually opening what used to be its stomach, the assistant found the barely consumed remains of a frog. The cat had caught the brightly coloured frog and eaten it before its mistress called it inside for its evening meal. The frog’s toxic altered genes were quickly assimilated and passed on to the cat’s owner when it rubbed against her and licked her face in gratitude for its meal.

All across the neighbourhood metallic-like cats, dogs, and people, all lay with expressions of agony on their faces where they fell as they came in contact with the terror spreading across Colombia unseen.

By nightfall the only sound that could be heard in Bogota’s leafy suburbs was the cry of hundreds of irrevocably altered Golden Dart frogs calling out to their mates. Nature’s final evolution had begun…