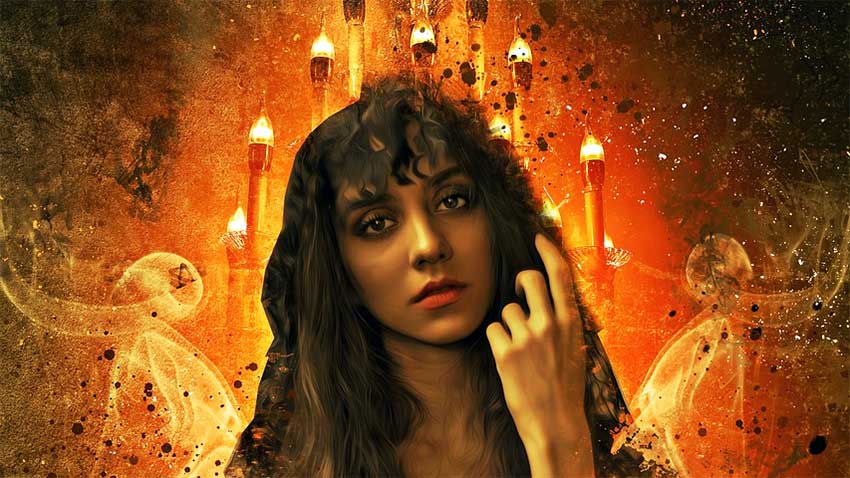 Woo Hoo, Witchy Woman, she got the moon in her eye…

Hi Witchy friends, I would like to share an excerpt about my meeting with one of the witches somewhere at the beginning of my initiation into the sorcerer’s world. The witches helped me to bring my ability to consciously dream to full capacity and made me aware of the connection between dreaming and sexual energy.

And don’t forget, in the dream world, anything is possible. Under the guidance of my mentor, the sorcerer Running Deer, I made the impossible possible and even managed to transform into an elf.

“I am about to depart when out of the corner of my eye, my attention is drawn toward a group of women. Hanging around looking bored, it seems like they have been waiting for the bus for ages.

I dig my heels in the ground. “Whoa, hold on a minute.” I stopped the eagle who was about to take me to the wind direction, pointed at by the woman in the street.

Tell me if I am wrong, but I believe them to be the sorceresses who dragged me along in my dreaming the other day. They exude the same mysterious atmosphere, somewhere between mysticism and light-footedness. I have to concentrate on seeing how many there are. I count one-two-three-four-five and watch them one by one. Two are not as exotic as in my dreaming, but it was dark.

One of them is tall and slender, her grey-blond hair is cut in an elegant bob, and she is fashionably dressed. She has a natural elegance, and she emanates life-wisdom without being pedantic. She looks like the eldest of the lot and the wisest, at least, that is the impression she makes.

The other woman has beautiful long red curly hair. She is pretty sturdy and makes a social and friendly impression with her rosy cheeks, a long pleated skirt, and thatched basket on her arm. Immediately, she puts me at ease.

The three dark women mirror the image of each other; they must be sisters. All three of them are dressed in black, and with their dark hair tied back, their caramel-colored skin, and big dark brown eyes, they are true exotics. They stand, or rather they hang between the other two, as though they are about to fall asleep any minute. The one in the middle is not half as slender as the other two, but all three seem smaller than the other two women. They stare at me silently without making me uncomfortable.

Without the interference of any tone of voice, I hear: “Hello, here we are, pleased to meet you.”

I would love to start a conversation, but I have other plans for now and promise to come back later to get better acquainted.

I fly along with the eagle, and from the air, I see the red path down below, bending like a thin trail through the rocky west, and I dive downward after the eagle. Like the first time, we land at the start of the trail, and after a short walk, we fly over the green palmtops in the direction of the ocean.

Further to the left, there are several bays interrupted by rocks and stones. I circle, exploring over the west’s shelter. It is the first bay seen from the rocks. Toward the right, the jungle starts narrowing into a point. I descend to the beach, make myself comfortable and take in the light orange horizon from left to right and back.

The tiger walks toward me, purrs, and pushes his head against my shoulder. I stroke his head softly, get up, and we walk to the wooden villa together.”