Excerpt from Paging Dr. Leff: Pride, Patriotism & Protest.
In the midst of his conflicts on base, Dr. Leff received a letter from his good friend Dennis Wolter, who wanted him to be the best man at his wedding in March.

Dennis had been running the motorcycle shop he and Arnie jointly owned in Cincinnati while Arnie was in Thailand. They had always been like brothers. 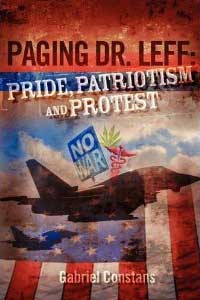 Not long after the invitation to the wedding, he received a reply from Senator Fulbright inviting him to speak before the Foreign Relations Committee, whenever he had an opportunity to make it to Washington. He decided to do it all in one trip and was granted a two week leave for the end of March, beginning of April, 1970.

It was soon after being granted leave that the military’s paranoia kicked in. Because of Captain Leff’s views and activities, he was seen by the Air Force as a trouble-maker and threat. They were certain he was smuggling drugs because of his contacts and visits with anti-war personnel and civilians at the base in Korat, and also thought he was the ring leader of a subversive, anti-war movement who was fermenting racial unrest.

“All untrue,” he states, “except for being anti-war. I had smoked marijuana the first few months I’d been in Thailand, but by this time, I had quit altogether. It was too risky in my position. I was a doc and didn’t want to lose control. I also stayed straight because I became aware of the informants.”

Colonel Mellish, the wing commander, had the Special Investigations unit put the captain under surveillance and planted informants in his adjoining bunk. Whenever he returned to the base from spending time at The Bungalow, there was a new man sleeping one cot over.

More than likely, the brass was aware of Leff’s intention to speak before the Fulbright Commission and knew he was gathering information to do so. Intelligence officers had told him of orders they’d received to change captions on reconnaissance photographs from “village” to “communist stronghold,” even though there was no evidence that the village had harbored communists or not. Leff also discovered that the US had Green Berets in Laos who technically were not there. His Air America (CIA) friends gave him photographs of their base in Laos. Fred Branfman had given him his report, including photos, places and names of villages and people who were being killed and maimed by U.S. bombings.

Captain Leff was certain he had enough information to delay, if not stop, the illegal attacks in Laos, if he lived to tell about it.

“I honestly believed my life was in danger,” he says. “The guy that ran the office of special investigation was alcoholic and for $500 he could have had a local guy snuff me out easy as pie. I really believed they might go that far… stranger things had happened.”