Two years ago, a couple of authors approached me about doing a collaborative novel similar to the Rubicon Ranch collaboration I’d been writing with Second Wind authors.

We invited a few more authors from other small presses to do this new collaboration. Two of the new authors suggested we do steampunk. I’d never heard of steampunk. Couldn’t even guess what it was. 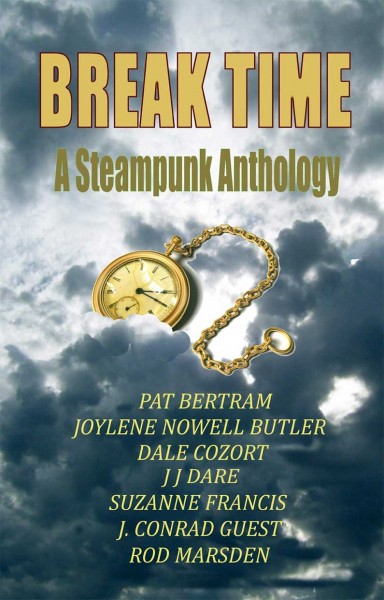 To be honest, I’m not sure I know even now what it is. Still, we all agreed on the genre. Such a collaboration is about stretching ourselves as authors, and how better to stretch than by doing something we’ve never done before.

The two authors who talked us into doing steampunk ended up walking away, leaving us with a story no one knew how to write. The rest of us decided to stick with the project anyway.

Why not? We’re writers. We can fake it. We also got the internet with all its research capabilities to help us.

Wikipedia defines steampunk as “a sub-genre of science fiction, fantasy, alternate history, horror, and speculative fiction that came into prominence during the 1980s and early 1990s.

Steampunk involves a setting where steam power is widely used — whether in an alternate history such as Victorian-era Britain or “Wild West”-era United States, or in a post-apocalyptic time — that incorporates elements of either science fiction or fantasy.”

In “How Do I Write A Steampunk Story?” Dru Pagliassotti says, “Steampunk fiction consists of two elements — the steam, or gaslamp aesthetic, iconography specific to the genre — and the punk, a critical ideology or political stance that satirizes, challenges, or subverts societal trends.”

Most of us writers were in a strange non-writing mode, so it was hard finding the time or the words. Although a chapter was supposed to be written each week, with each of us taking a turn, life often got in the way, and those weeks turned into months.

Instead, the others decided we should finish the book not as a collaborative novel but as an anthology.

The anthology will be published soon, and it’s actually quite an interesting collection of stories, all written around a single theme of time travel and “killing steam.”

(The time traveler’s wife and son were killed in a steam engine accident, and since he couldn’t bring them back, he decided steam was to blame and so traveled back in time to try to divert the progress of the steam engine.)

I feel good about finally winding up this project. I have no real desire for long-term projects right now. My life is up in the air, and I don’t know from day to day what is going to happen. (Well, that’s true of everyone, of course, but generally, people feel at least a bit settled.)

The anthology begins with my story about Florence Giston, Flo for short. (I couldn’t resist that name. Flo Giston. Phlogiston. Seemed appropriate.) The opening paragraphs of that story read:

The first time her husband died, Florence Giston felt such feral grief, she feared she’d never survive. She’d always tried to look on the bright side of things, but she could find no bright side to this situation. Her husband was dead, and she felt as if she had died, too.

“You can’t let it get you down,” said Alexander Giston, her father-in-law. “Just because Robert and Mary died, it doesn’t mean they are gone forever.”

The second time Robert died, Florence’s already broken heart shattered beyond repair. Robert had been her whole life, and to lose him twice seemed unbearably cruel. She vowed never to go through such trauma again, yet when Al announced he intended to try to save his wife and his son again, Flo begged to go with him.

“I need to see Robert once more,” she said. “Need” seemed a paltry word to describe the yearning that clawed at her, but Al must have understood her desperation because he agreed to let her accompany him on his second trip to their shared past.

I seem to be fascinated by characters who die “more deaths than one.” In my novel of that name (taken from Oscar Wilde’s “The Ballad of Reading Gaol” — he who lives more lives than one / more deaths than one must die), poor Bob Stark returns home after living in Southeast Asia for eighteen years to discover that the mother he buried before he left is dead again. But I digress.

Time travel brings with it delicious ironies. In this case, Flo’s view of Robert — and herself — isn’t exactly what she expected.

A young woman stepped outside. “What’s going on?” she asked, her voice soft and tremulous.

Flo stared at herself, at the brown lace stockings, the brown gored skirt, the brown jacket, the brown plumed hat. What was I thinking? She vowed to throw out all the brown clothes she owned, including the brown shirtwaist she now wore.

“This is dad from the future,” Mary said. “He’s come to save us from certain death.” Catching the irony in her mother-in-law’s voice, Flo wondered if she’d underestimated the woman. Mary had always seemed so drab despite the bright colors she chose to wear. Was nothing as she remembered?

“Good of him,” Robert said. There was no irony in his voice, no affection. “We can take the aeroship.”

“Well, no.” Al scuffled his feet. “I already saved you once. I came back and made you take the aeroship, and it crashed. They never found your bodies.”

Flo stifled an urge to laugh, but Robert didn’t even crack a smile. “I’ll drive the Steamer,” he said.

“Couldn’t you just stay home?” Al asked, a note of pleading in his voice.

Mary shook her head. “It’s my father’s funeral. I have to be there.”

“We’ll be fine,” Robert said. “The Stratosphere Steamer is the safest automobile on the road.”

Also the fastest, Flo thought, but she kept her mouth shut. So far, the Gistons hadn’t noticed her, and perhaps it was just as well. Robert had never seemed to be able to handle one of her; two might overtax his feeble imagination.

Appalled at the direction of her thoughts, Flo slipped back into the lab. She’d loved Robert dearly, had mourned him twice, so what prompted her to be so dismissive of him now? Remembering how besotted she’d been, she wondered if love hadn’t been the blessing she’d always presumed it to be, but had instead been a prison, keeping her emotionally shackled to a man for whom she had little respect.