Douglas and Querilla wake up on a rocky pathway of the Dwarven kingdom, Ak Tiem. Down here it is warm and muggy. As the young couple sits up several dwarves surround them.  One of the elders, a blacksmith named Kal Eldrich, was on the team of dwarves that dragged Douglas and Querilla into their kingdom.

“Here are some clothes for you two,” Kal says tossing the couple a set of furs for each to “W-w-where are we?” a shivering Querilla says putting on her furs.

“You are in the kingdom of Ak Tiem,” he calmly answers the question.

“But I always thought Ak Tiem was a myth.” 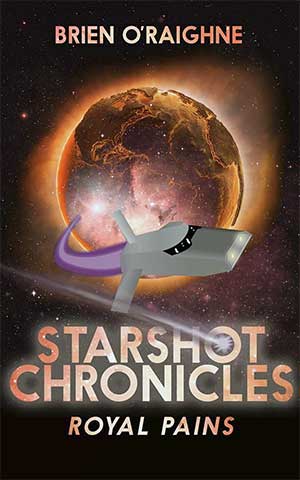 “As you can see for yourselves, we are not a myth.”

The couple looks over the ledge to see a bustling kingdom. The many denizens of Ak Tiem work and play to keep the Dwarven stronghold alive with spirit.

“Does Raveneau know of this place?” Douglas asks Eldrich as they begin to walk down the pathway towards the bustling kingdom.

“Oh, sorry. My name is Kal Eldrich,” the elderly dwarf says. “I’m a blacksmith and some also say that I am a soothsayer.”

“Kal, my name is Querilla Opaaca, princess of the Republica FaLor, she says bowing.

“And I am…” Douglas is able to get out before being interrupted.

“I know who you are Douglas Harley or should I call you by your rightful name, Ethan Stolidar.”

“One of my gifts, son. I also see that you two were meant for each other.”

Douglas looks at Kal Eldrich quizzically not understanding the question asked of him.

“Let me clarify that for you then,” he says stopping in the town square. “Do you know why you two are meant for each other?”

“Because we are lifemates.”

“Then what’s the rest?” Querilla asks the gray haired dwarf.

“That is something you shall learn on your own. I cannot tell you.”

“Why is that?” Douglas asks.

“The future, always in motion, is very difficult to predict.”

“I think I understand.”

Kal then instructs the young couple to follow him down to the great hall to meet their king, Eric Valhalla. Several guards flank the visitors who stood at least six inches taller than the dwarves. The building and houses were carved into the rocky insides of the mountain. The craftsmanship was exquisite up to the fountain in the town square. A small creek ran to the side of the town providing their water supply. Their food was grown in special greenhouse gardens.

“This is beautiful,” an astonished Querilla says as the group arrives at the Great Hall.

“Thank you, your highness,” Kal says humbly. “It took us many centuries to complete this kingdom.”

They walk through the doors of the Great Hall. Once in the main hallway, the group turns to the right and walks for ten minutes before reaching the throne room. For Douglas and Querilla the height of the ceiling was making it a little cramped for the young couple. In the throne room, Eric Valhalla is chomping down on a large chicken leg. The king loves food, as everyone in the little kingdom knows. Just as the king finishes his daily snack, Kal Eldrich and his group walk into the throne room.

“Who are these strangers, Kal?” Eric demanded to know.

“These strangers were found in the cave just outside our kingdom, sire. Their names are Querilla Opaaca and Douglas Harley.”

“Nice to meet you two. I am Eric Valhalla, king of Ak Tiem.”

“It is an honor to meet you, sire,” Princess Querilla says bowing before the Dwarven

“Why, yes he is. Then you have heard of my family.”

“By reputation only, I’m afraid. They have treated their Dwarven friends very well.”

“Yes, we do. My parents believe that everyone should be treated fairly.”

“We treat each other the same way. Our chief blacksmith left with several others about thirty years and settled on Bella FaLor.”

“So Taven Ironsfield is from Ak Tiem on Kornokovia,” the princess wonders aloud. “He would never tell me where he was from.”

“Taven is also one of our chief designers.”

“Sir, I would like to know how we are going to fend off Raveneau’s forces,” Kal asks his “I don’t know. But we will have the war chief formulate some sort of plan.”

“Thank you, sire,” Kal says. “Lord Raveneau will surely be looking for these two.”

“I suspected as much,” Eric Valhalla says to the group before turning to his aide. “Jarren, please send for War Chief Venill.”