Ebon directed Anna to stand by the window and keep watch in case anyone started up the pathway while they were in the middle of the magical process he believed would prove to be salvation for him and Shetland.

He did not want to be disturbed while his spells were ongoing, and he especially did not want to be interrupted by anyone who might actually try to stop him. He reviewed his notes two more times before he felt confident to begin.

“Stand in the centre of the room,” Ebon ordered Shetland. “This could get messy.” 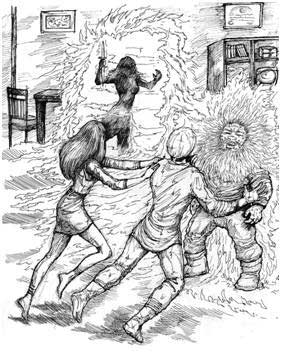 Anna trembled as she waited by the window. While she kept her eyes on the shadows and light of early evening, along with the darkness that shifted across the path from the lighthouse, she was also watching in the glass the reflection of the activities that were proceeding behind her. She wanted so badly to be actively involved in this potentially historical moment, but Ebon had told her that she was too much of a liability. He had insisted she would be most useful as a lookout, standing well away from the wraith-mage and the dwarf as they went through the motions.

Ebon’s eerie red eyes glowed when he was angry or excited and they were one of the most prominent items in the reflection. Anna touched a finger to the glass where Ebon’s eyes shone, wishing that she could be sharing in his excitement. His tactic of having her serve as watchdog was just a ploy to get her out of the way. Anna was very aware of this, but she could not blame him. Ebon needed everything to go perfectly, and that meant he needed her uninvolved. As the minutes ticked away, she continued to watch, allowing her sadness to show in her face since no one could currently see it.

When Ebon began casting his first spell, a minor transmutation spell, through Shetland and into a magical buffer that Anna had set up earlier, the dwarf began to glow. His coarse grey hair also started to stand on end. This was the most common reaction Shetland had to any spell not cast directly on him, but, rather, through him. That spell would have no other effect on its own, but introduce an energy-enhancing spell on top of it and infuse it with a dimensional pocket enchantment, and Ebon was convinced that the final effects would be spectacular. It would turn Shetland into a complex magical vacuum, drawing Ebon out of the other dimension in which he was partially suspended, and pulling him fully back into this one. The enchantment-imbued metal, which had mingled with Shetland’s dwarven flesh when he had tumbled into the melting vat as a child, would be drawn to the surface and evaporate, forming a magical cloud of sorts. This cloud would then solidify, sealing the dimensional pocket that would be penetrating both dimensions and allowing Ebon to transfer completely back to this one.

It would have seemed overly complicated to anyone but Ebon, but he had lived this process for years, existing to see it through to fruition. If he had been capable of eating, sleeping and breathing, he would have eaten, slept and breathed this moment since the day he succeeded at the University Admission Trials.

As Ebon initiated the second spell, not only did Shetland now glow with a slightly golden hue, he also began to vibrate in a very subtle way.

“I’m startin’ to feel the pull!” he hollered at Ebon, the noise from the combined spells almost deafening.

Ebon knew exactly what the dwarf meant. The first time he had tried this combination of spells, he had felt the pull as well, just as he was feeling it now. He had stopped the experiment prematurely that time, unsure how to proceed and uncomfortable with the strong tugging sensation within him. The tugging had come from two directions at once, like he was in danger of being split down the middle. Ebon had acknowledged after further studies, that he would not be able to undergo this change without pain. There would be an agonizing tearing sensation, and he would have to endure it if he wanted to succeed. Shetland would likely undergo similar agony, but he was not averse to the idea of pain, if it meant he would finally be a normal dwarf again. The two cohorts steeled themselves as Ebon prepared the third and last spell.

Ebon hesitated. He was unsure where the whispery voice had come from, or how he could possibly hear it above the roar of the other two spells. It was soft, seductive and somehow familiar.

“Whatchya waitin’ for!” yelled Shetland, unable to see Ebon’s look of surprise. Very little could be distinguished on his face, due to his shadowy form. 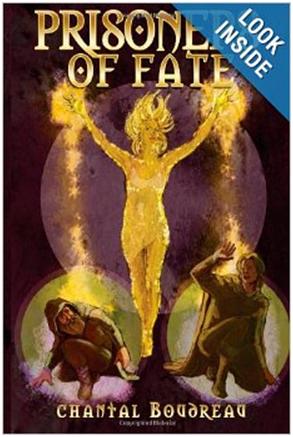 “Go on…finish it!  You know you want to. It’s time. We’ve been waiting for so long…”  That voice again. It disturbed Ebon greatly, especially because he felt as though he knew who and where it was coming from, but he could not put that knowledge into coherent concepts. This confusion made it difficult to concentrate, and a lack of concentration made spell-casting a dangerous affair.

“Quit stallin’, ghost!”  Shetland bellowed, his vibrating intensifying to the point that flecks of froth were forming on his lips. “Do it already!”

“Shut up!  Both of you!” Ebon screeched, his voice becoming a high-pitched whine, intermingled with the rest of the noise. He centred himself, ignoring the chaos and focusing on the buffer beyond Shetland. He started the third spell. A maniacal laugh of triumph reverberated around them. Then it began.

Pain was a very simple way of describing what Ebon felt, and while agony was a more apt description, it was still insufficient. The hurt was greater than any Ebon had ever recalled experiencing, as if he were being torn inside and out, ripping right down his centre. Ebon tried to hold it back, but all of his discipline was not enough to keep a blood-curdling scream from escaping his lips. As he fought the throbbing ache that dug deep into his core, he saw a shape before him, a vague silhouette approaching him with increasing speed. It would reach him in a few seconds, right about the time the spells, the pain, and the process would all come to an end. He braced himself.

Suddenly, there was an abrupt pressure on his back and he was falling forward, tumbling into Shetland. The dwarf had not been expecting the collision and while he normally could have resisted such an impact, he was knocked off his feet as well. They fell together in a heap, at the far end of the room. Everything went quiet.

Read more about the adventures of Ebon, Shetland and Anna in Masters and Renegades #3: Prisoners of Fate, available at: Amazon

Despair in the Midst of Jubilation