Excerpt from novel Buddha’s Wife. Told in the first person by Yasodhara who has left the order and is dying. Ambapali was one of the first women Bhikkhunis (nuns), as was Pajapati (Siddhartha’s step-mother) and Yasodhara (Siddhartha’s wife).

Chapter 10
Ambapali was in secluded meditation at the Vihara of Jetavana. She was bald, having cut off her silky black hair when she joined the Sangha. She wore a simple brown robe, with a single sash to tie at the waist. 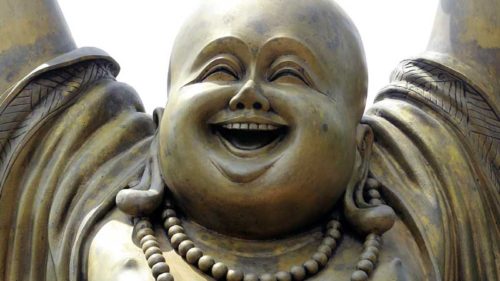 In her early seventies, her arthritic knees were acting up far more often than she liked to admit. She had to sit on a small stool or recline completely to meditate for long periods of time. Her once sensuous hands; hands that had caressed and brought hundreds of men pleasure in her younger years; were now knotted and swollen like her knees. The skin around her eyes were lined with wrinkles, but her cheeks and lips retained the soft, alluring quality she had had when she first gazed upon her future mentor and lover, Siddhartha. It was in those dark brown pools, of her now enlightened eyes, that The Buddha, Siddhartha of Gotama, had temporarily strayed, allowing his senses to define his consciousness.

It was one of Ambapli’s nuns, who brought her one bowl of food per day, who told her of my failing health. Without explanation or hesitation, she picked up her shoulder bag and begging bowl and informed the other nuns, who were also on retreat, that she was going south to see me in Rajagaha.

“But she’s not even a follower!” Bishaka, one of her younger disciples, exclaimed. “What about us, your devotees? We need you here.”

Ambapali put her hand gently on Bishaka’s shoulder. “Yasodhara is my friend. There is nothing greater than the love of friends.”

“But she no longer follows The Way or practices the precepts.”

Ambapali smiled. “She lives The Way. She is as much a Buddha as you or I.” She bowed to Bishaka, turned and walked away, leaving her devoted devotee staring at her backside pondering how an old woman who had left the order a decade ago could be compared to her beloved, enlightened Ambapali.

As Ambapali left the protected encampment a torrent of emotions, thoughts and images assaulted her memory. With relentless ferocity they took her into the past, provoking anxiety and doubt about seeing her friend, the woman whose husband she had laid with, consuming his body and his mind.

Shortly after Siddhartha’s death Ambapali had tried to bridge the unspoken gap of misunderstanding. I had told her there was no need to talk of the past. “We both loved the same man,” I’d proclaimed, tears streaming down my face,“There is nothing wrong with love.”

“No,” Ambapali had insisted, “I loved what he stood for, what he had become.”

We had embraced as sisters.

Her expression of sympathy and attempt to take down the fence that had been erected between us while we lived together as nuns, were heartfelt. We had finally acknowledged that the fence existed and agreed to open the gate to forgiveness.

She knew that she and Siddhartha had been seen together several times. When she first joined the order she had taken every opportunity to seduce him, to find out what he was made off. For some time she had been successful. Even though they were painfully discreet she had felt the eyes of others in the night; the eyes of those who would not and could not understand her need to discover if this was The Buddha, The Enlightened One or simply a man with human needs like all the rest.

She stumbled on a root and stopped from falling by grabbing onto a knotted branch that looked like her hands. As she found her balance and told her self to pay more attention to what

was in front of her, an image of her mother, who had also been a courtesan, came upon her.

Her mother was thirty and she was fifteen when she realized what her mother did to survive. She had promised that she would never follow in her footsteps. Her mother promised to find her a respectable husband to marry. How she could fulfill that promise was a mystery, but one her mother had tenaciously held to her death.

They had been walking along a path, like the one she was on now when her mother stopped dead in her tracks and fell to the ground convulsing, phlegm oozing from the corner of her mouth. She remembered screaming, “Mother . . . mother!” Her mother’s eyes had rolled back in her head as her jaw clamped shut. Her breath came in spurts. She shook her, again and again, crying, “Please . . . somebody!” but no one could hear her cries. It was soon over.

It had been quick; without warning. She’d lept from her mother’s side and ran. She ran and ran, as fast as she could. She ran to her uncle Sikhura’s house and told him what had happened. In spite of his wife’s lamentations to not get involved with “that woman”, he followed Ambapali back to his sister’s body and brought her home for cremation and religious services.

After the funeral Sikhura offered to take in Ambapali, but his wife would have no part in it. “I won’t let a woman like that in my house!” she insisted.

“She’s old enough to know what to do with you,” she’d said venomously.

“Don’t be ridiculous,” he said. “Where’s she supposed to go?”

“She can stay with her mother’s people,” his wife spat, “they’ll take care of her.”

“Take care of her?” Sikhura surmised. “You know what they’ll do.”

“It’s where she belongs,” his wife concluded. “I won’t allow a whore in this house!”

Ambapali overheard their conversation. She was ashamed and left in the middle of the night. Not knowing where else to turn, she found her way back to her previous residence, the House of Yoniatma. After several lonesome months of mourning she was “put to use” and “taught a trade”. She began her training in the art of Kama Sutra, the art of “making” love and was taught how to minister too and please men.

“I’m sorry Mother,” she said out loud, as she walked towards Rajagaha, being careful to not stumble again and fall on her face. “I did what I had to do.”

She had been very successful at her vocation. It had given her access to many powerful and wealthy men, but had never brought her happiness or peace. She soon realized why her mother had wanted her to take a different path.

It wasn’t until she had encountered Siddhartha in her mango grove that she had ever entertained the thought that there was something more, something beyond the known, the physical. His words had sparked a smoldering fire that lit her curiosity. She became determined to see if his words were real or more false promises. She vowed to find the truth, even if it cost her some clients or ironically, sullied her reputation.

Five years after following The Buddha’s teachings and meditation practices from the time she opened her eyes in the morning until she fell asleep in the night, Ambapali discovered that she knew so little and wanted to experiencing everything. She left her courtesan life, took her vows to follow the precepts and lived as a nun.

There had been a particularly long winter when the brothers and sisters of the Sangha (believers of the Buddha’s teachings) had been in retreat throughout the rainy season. Ambapali had finished eating her only meal of the day and was mindfully washing out her bowl, contemplating its emptiness, when she awakened to something beyond her self, something that was greater than her ego or self-consciousness. It was indescribable, yet she had tried.

“It felt like a rush of air filling a gigantic void inside my heart,” she told me and Pajapati. “It is as though ‘I’ do not exist, yet here I am. Everywhere I look I see one heart, one love.”

We listened rapturously, trying to absorb some of the peace and wisdom she radiated. “It’s not something I can hold on to. If I try to contain it, it blows through my fingers like the wind. If I try to grasp for it or label it, it melts like dew drops in the sun.” She looked fervently into my eyes. “I wish I could give you this joy, this happiness and peace.”

“You’re like a warm fire,” Pajapati smiled. “We are basking in the glow of your compassion.”

Thirty-eight years later the glow remained. She had become so unselfconscious that she was often not aware of herself as a separate entity. As long as she was in her physical body, thoughts, emotions and sensations would continue, but her compassionate nature was so ingrained that people wanted to be around her, to touch her, to bask in her presence.

Now, if her knees would allow it and the rest of her aging body permit, she would see me once again. The woman who had shared her intimacies, fears and joys; the one she had unintentionally hurt beyond comprehension.