“You gotta expose yourself to extreme fear to see the Way.”
“What? To see how tough you are?”

“No, jackass, to see how much grit you have, how much iron is in your blood.”
“Right…like, to see how tough you are.”
“No you got it wrong…. to see how deluded you are. -How your perceptions of things aren’t skewed…. there’s a theory that the path to enlightenment begins with real conception of your mortality. After that you supposedly see things…. you see the Way.”
“What? What is this some sort of Zen philosophy?”
“-Something like that.”
“O.k. Hemingway, what do you see?”
“I see that you’re an immature adolescent who doesn’t know his head from his ass.”
“Shut up.”
“There was this guy…..a Samurai warrior, name of Miyamoto Musashi….killed over 60 men in mortal combat-never lost.”
“What? So you want to be a Jedi-is that it?! Who’s the immature jackass now?!” 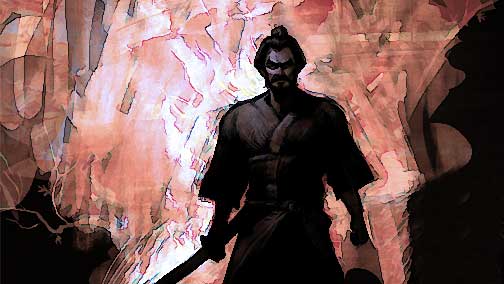 “Shut up, and let me finish…this is serious. He fought in 3 wars and survived…said he attained the -”
“O.k. Rambo you’re starting to sound like some Bruce Lee nut I’m outta here.”
“Wait, hold on a sec-said he attained the Way when he was 50…said his past success was due to either great skill…great luck…. or the order of heaven.”
“Wow…that sounds really cool…cool to a fuckin’ wannabe soldier or somethin’.”
“Shut up.”
“See, you’re just another white guy obsessed with Japanese and oriental culture…thinking they have it straight.”
“It’s Asian culture-”
“Whatever…see, your problem is that you’re disenchanted with western thought that you grasp at straws for some clarity that Asians might, and I said, might possess.”
“Now hold on-”
“No, you hold on. Sure a lot of Asians have their act together but they’re human just like everybody else.”
“That’s exactly my point, realizing mortality is the first step to enlightenment.”
“I think everyone knows that Sherlock Holmes.”
“Smartass.”
“O.k. So what else about this legend- what makes him so great? -That he was a psychopathic serial killer…. that-”
“You’re missing the point.”
“Am I? I think you’re missing the point, o.k. What’s the point?”
“The point is to attempt to see things clearly- to be correct about what you see.”
Wow, Zen master, that was so insightful, I think I’m gonna shoot myself now.”
“See, you’re so cavalier about life, you’re never going to accomplish anything.”
“Who says there has to be something to be accomplished?”
“Exactly.”
“What?”
“You got it. There’s nothing to be accomplished, and yet, there is.”
“What the @?#!”…That was great. I feel so enlightened now. It’s a fuckin’ merry-go-round with you.”
“That’s what Zen is all about. It’s a constant merry-go-round. It’s never-ending.”
“Great, life is a fuckin’ circus.”
“No, it’s not and, yet, it is.”
“Oh, my god Now I’m really gonna kill myself.”
“You should.”
“What?”
“You should kill yourself…or rather do the things you fear most and surface it.”
“Great, I think I’ll go skydiving.”