Randall is sent out to dig up some information about Wilbur and Vince and who they may have become acquainted with while serving time in prison. Randall has talents in this kind of work. Genuine talents.

He grinned as his left foot depressed the clutch pedal as he downshifted into second gear before his right foot tapped gently on the break pedal. The rattling old box of nuts and bolts for a ’56 Chevy pick up truck came to a halt two cars behind a Dodge Charger.

His grin widened into a smear of pure pleasure. 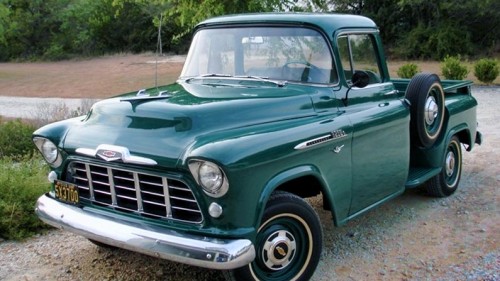 Here he was. Sitting in late afternoon traffic surrounded by newer models of steel, glass, and plastic. New wheels costing thousands more than his old truck. New wheels with efficient air conditioning. Power steering. Power brakes. And stereo system that actually worked. But not him. Sitting behind the wide plastic steering wheel of the old truck, the windows down as far as the could go on each door, the old six cylinder engine in front of him hummed along quietly. Around him the other drivers in their new cars couldn’t help but stare at him and the old hulk he sat in. Which, frankly, tickled the hell out of him. His grin continued to split his face in half as he threw an elbow out the window beside him and waited for the traffic light to change.

He and the truck seemed to be of the same metal. Old, discarded, dented and abused from hard use and little maintenance. Yet still ticking over like the first time it started up almost fifty years ago. Still serviceable. Still reliable. Still willing to work.

Sometime back in ’56 the old truck, when it came off the assembly line, had been painted a dark leafy green. Over the years it obviously had caught hell surviving in city traffic. Now it had large patches of gray primer paint dotting across the fenders, hood and truck bed, giving it an almost some kind of surreal urban camouflage to it. There was still a lot of green paint left on it. Somewhat faded. But still there.

The old set of wheels had been his for years. His all around method of transportation. But he sold it a few months. Sold it so that his newly discovered daughter and her baby could have a decent place to live. He sold it to someone he knew was going to sell it off to some collector. Someone who would pay big money for an old rattletrap like this and put thousands into it to restore it back to original condition. It had broken his heart to see it drive away. But he never complained. Never uttered a word to his daughter about losing the truck. They needed the money. Still . . .

And then, earlier this morning, the boss told him they had to use the Caddy and drive across town. He drove the big piece of steel, top down, pink paint glistening in the morning sun, as the boss rode in the back seat like some kind of royalty dressed in his immaculate three-piece suit and smiling to the peasants regally. All the way across town he drove the boss. To a junk yard over by the big railroad yard.

The boss told him to turn into the junk yard and stop. He did. And saw it immediately. His truck. Green and gray splotches and all. Just sitting there beside the tin building which was the junkyard’s office. New tires. Washed clean and topped with a full tank of gas. Amazed . . . no stunned . . . he twisted around in the front seat to stare at the boss.

The smiling little lawyer extended a hand forward and dropped a set of truck keys onto the white vinyl front seat beside him.

“I was fortunate in acquiring your vehicle at a modest price, my friend. It required a few needed mechanical repairs. But nothing too expensive fortunately. Since you are now working for me it is necessary for you to have a reliable mode of transportation to get you back and forth. What better way to disguise yourself in city traffic than to drive an old truck no one would think twice to glance at? Now go. Go find whatever, or whoever, it is who will give us the information we need to rescue our Tammy. But Randall . . . be careful. I want no one to die today. No one.”

No one was going to die today. He promised. Up ahead the traffic light turned green and the traffic started slowly inching forward. In the Dodge Charger two cars up in front of him sat a guy by the name of Crank Nathan. Ex-con. Mean. Had a taste in hurting others like some people had a taste for plain black coffee. He, Crank, and the Harrows brothers all served time together in the state pen. The three of them, Wilbur and Vince and Crank, were inseparable. A threesome pack of snarling little rats if there ever was one. None of them had a liking from him. Especially Crank. Crank was always trying to get on his bad side. Always trying to pick a fight.

But Wilbur, Vince, and Crank were tight while in prison. If anyone would know anything about the brothers and who else they ran around with in prison Crank would know. The problem was approaching the mean sonofabitch and getting any kind of answer out of him. Which, oddly, made the grin on his face widen a bit. The prospect of conversing with Crank in the only way Crank could understand was giving him a warm, fuzzy feeling in his gut.

Since getting out of prison Crank went back to his old ways. His thick head and high tolerance for pain made him the perfect enforcer for a local small time bunch of gamblers and loan sharks. Crank had a talent for inflicting pain. And he used his talents for his personal gain. A new car, a nice apartment on the south side of town, some fancy clothes almost made the tough guy look respectable. But Randall knew. Knew what Crank was down to his very core. Nothing but a piece of shit who liked to hurt people. Innocent people. People maybe like his Tammy and baby grandson.

Crank was heading home. Keeping himself hidden in traffic his old green Chevy followed the powerful Dodge past five traffic lights in a sea of heavy traffic. When Crank signaled he was getting out of the river of traffic to turn into the underground parking garage of his apartment building, Randall drove past the garage entrance and slipped over the cross street before finding an empty parking space in front of a cafe. Sliding the old truck into the pace he cut the engine and sat back in the old seat. Glancing to his left he watched for a moment or two at the people in the eatery minding their own business as they sipped their coffee and read their newspapers. He waited for exactly ten minutes before climbing out of the truck and closing the door firmly.

No one noticed him. No one looked up. No one cared.  Just a guy in a dark denim shirt and blue jeans. Wearing heavy work boots and driving an old pick up truck. The smile still on his lips Randall twisted to one side and started walking. Walked with hands stuck in his blue jeans and his lips puckered together as he whistled some ad hoc tune no one had ever heard of.

When he stepped out of the elevator on the ninth floor of the apartment building he reached behind him and pulled out a small leather billfold from his right hip pocket. As if he didn’t care about the security camera at the end of the hall behind him. He stopped in front of door and leaned an ear toward the door for a quick listen. But he leaned with his face turned away from the security camera. The only thing the camera recorded was the image of a tall man dressed in a blue denim shirt and blue jeans. A tall man wearing tight black leather gloves on his hands.

A tall, lean man who apparently knew what he was doing. It took him all of four seconds with the lock picks to open the apartment door and slip in soundlessly. Closing the door softly shut behind him Randall eyed the apartment hallway to his left and then looked straight ahead into the apartment’s small living room. In the middle of the room was an ironing board. On the ironing board was a big iron, its black cord spiraling down to the carpeted floor and snaking across the carpet to a wall socket. On the floor beside the ironing board was laundry basket filled with shirts. Shirts which needed to be ironed.

To the left of the ironing board was a big flat screen TV blaring away. Apparently Crank was domesticated enough to know how to iron his shirts and watch TV at the same time. Randall grinned, amused, at the thought. Stepping into the living room and up to the hot iron resting atop the ironing board just as the soft hiss of a bare foot moving over the carpet came to his ears.

Crank walked out of the kitchen and into the living room and jerked violently to a halt when he saw Randall standing by the ironing board look at him.

“Hello, Crank. Thought I’d drop by so we could talk about old times. You know, about how you and Wilbur and Vince liked to give me hell back in the joint. Good times, eh pal? Good times.”

“I’m gonna give you a good time, alright. I’m going to knock every damn tooth outta your head, Cooke. And enjoy doing it!”

A mask of pure hate distorted Crank’s face into an ugly contortion as he took one step toward Randall and swung a sweeping right cross around with all his might toward Randall’s left jaw. It never landed. Swiftly, with concise precision, Randall threw a forearm up to block the right cross while his other hand came up with the heavy looking iron that had been setting on the ironing board and smacked the heavier, slower man full in the face with every ounce of strength he had. There was a loud hissing sound as hot iron deeply burned flesh for a half second or two before the bigger man’s knees buckled. Stepping back and to one side Randall watched the apartment owned go head first into the deep carpet of the living room with the same velocity and aplomb of someone throwing a bag of cement onto a loading ramp.

“Need some information about Wilbur and Vince,” he said, glancing at the hot iron still in his hand and smiling fondly. “I think you’re gonna sing like a little birdie for me, my friend. Like a little birdie.”

He promised the boss no one would die today. But nothing was said about manually giving someone an unusual facial tan while they talked about the good old days.

Nancy Duci Denofio Jun 21, 2013 1
Ghost Writing Example A Personal Memoir John was dressed for school, but this morning, he was hiding behind his…
Featured