Preface
In the middle of June the sun stood at high noon, the temperatures blazed in the high nineties. Busy pedestrians moved aimlessly about; coming from and going to their transient destinations.

On a mission, Diamond strolled through downtown Atlanta. As he did so, he continued to remind himself that the hands are quicker than the eyes. Mysteriously he blended in with the large crowd.

He wore a pinstripe Armani suit, and polished black Stacy Adams shoes. In his hand, he carried a metallic briefcase and sported executive eye frames. His image had been pre-set.

Full of confidence, Diamond had no worries about his mission. He felt cocky, yet remained capable of pulling off any scheme. However, unlike all the other short-con hustles he routinely pulled off, this con stood on a much higher level. He needed to bring his “A” game.

With a determined arrogance, he entered White Owls, an exclusive wholesale diamond mart, which catered to the wealthy. Giving the immediate area a once over, he quickly spotted the manager. She was Caucasian, in her late fifties, heavy, and unattractive. Her nametag read, “Betty”

Diamond stepped to her. His voice was strong, commanding, and he spoke with an educated tone. 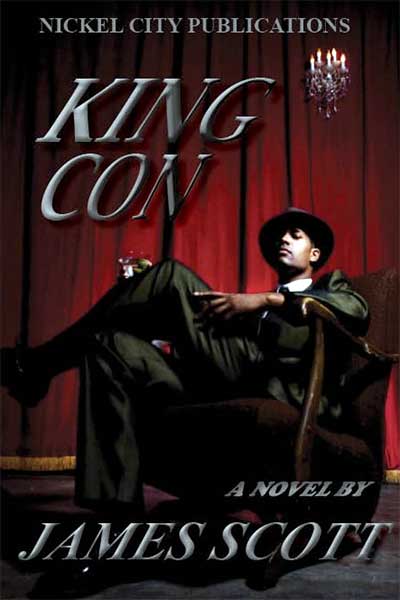 Betty donned her business smile and went into sales mode. She replied, “Good afternoon sir, how are you today?”

“You’re welcome sir,” She spread her open hands apart. “Welcome to White Owls. How can I help you today?”

“Well,” Diamond cleared his throat and gave Betty a charming smile. “To begin with Betty, you can start by calling me Jack.”

She returned his smile, and then said, “Fair enough Jack.”

“Thank you Betty. Now, please allow me a moment to explain the nature of my visit.”

Betty crossed her arms and relaxed. “Go right ahead Jack.” Like any good salesperson, she paid close attention to Diamond’s every word. She remained quiet and attentive as she mentally searched for a solution to his problem.

Diamond awed Betty with his fictitious story. He bedazzled her with a story about how he planned to have his wife’s wedding ring cleaned and the tiny diamond polished. Instead, he intended to surprise her by buying a bigger diamond to set into the ring. Unfortunately for him, he lost the ring and now he has to replace it before his wife finds out. He explained about how much trouble he had to go through to find a replacement ring. Now, he needed to find a two-carat diamond to complete his task.

“Betty,” Diamond lowered his head, displaying shame. “I cannot go home without a two-carat diamond,” he said as he handed her the ring. “God help me if the Mrs. Finds out, I’ll have one angry wife on my hands.”

“Well Jack,” Betty uncrossed her arms, placed one hand on her wide hip, and took a deep breath. “It seems as though we have a serious problem.”

“A problem I’m hoping you can help me solve.”

“I’m sure we have something to keep Mrs…?”

“Hammer,” Diamond said, “Mrs. Hammer.”  He managed to keep a straight face while he laughed inside.

Betty left and disappeared through a thick steel door at the rear of the store, which appeared to be a walk-in safe.

Two days before, Diamond had entered the same diamond mart. He located and took a mental note of all four security cameras. Without being too conspicuous, each time he turned facing one of the cameras, he used his hands to block his face. He needed to keep the cameras from getting a clear view of his true identity. With his tinted glasses, fake mustache and sideburns, there was no way he would be recognized. Moments later, Betty returned. In her hand, she held a tin box. The box contained a few packets of well-crafted diamonds wrapped in folded wax paper. Each packet held its own different cut and clarity of two-carat diamonds.

Betty motioned for Diamond to have a seat. She proceeded to open the box and then said, “Here we are Jack.” She started with the first stone and placed it onto a velvet cloth covered tray. “What we have here is the flawless, D-class, excellent cut diamond.”

They sat side by side at a small glass table, while Betty explained the cut and clarity of each diamond. Overall, she gave Diamond a full summary of the entire selection. Diamond remained unexcited and focused on his intended target.

When Betty finished, she said, “Well Jack, what do you think?”

Diamond took a moment to contemplate his answer. He wanted Betty to continue her pitch and convince him to buy. He tried to appear unsure about which diamond he wanted, even though he had already staked his claim on the diamond he wanted.

Finally, he said, “The D-class diamond, how much?”

Betty handed Diamond a jewelry lens. Next, she picked up the diamond with a set of tweezers for Diamond to examine.

Diamond focused in on the prize.

Betty said, “If you will observe…” Diamond cut her short. “How much is it?”

Betty seemed a bit agitated at being so abruptly cut off, but maintained her composure. She answered, “Four thousand dollars.”

Diamond’s focus went back into the lens, pretending to inspect the stone. Swift, but smooth, he squeezed the tweezers in Betty’s hand. The diamond popped from the tweezers and tumbled across the tinted glass table. With calculated speed, he trapped the stone between the palm of his hand and the table. Without hesitation, he turned his hand over and presented the diamond to Betty. Immediately he began apologizing.

Betty turned beet red and tried very hard to hold back her anger.

Diamond blurted out, “I’m so sorry Betty. Please forgive me for my clumsiness.”

Betty quickly retrieved the stone from Diamond’s hand and returned it back to its packet. Reluctantly she said, “It’s ok Jack, accidents happen.” Her thoughts were more focused on selling the diamond and making her commission.

Diamond laid his briefcase across the table and searched to find his checkbook. After deliberately stalling, he said, “I’d like to purchase the diamond Betty, exactly how much do I owe you?” He waited for Betty to give him a price. Distastefully, Betty frowned. “We don’t accept checks Jack, I’m sorry.” She pointed to the sign on the wall. It said, “Cash or credit cards only.”

Diamond appeared to be disappointed. He even covered his face with his hands, pretending to be frustrated. His play needed to make his actions appear genuine. He said, “I’m sorry to have wasted your time Betty. Unfortunately, I don’t have time to go to the bank at this time. I guess I’ll have to break the bad news to the Mrs.”

Betty became genuinely saddened, “I’m so sorry we could not help you Jack. I do hope you find what you’re looking for though; at least for Mrs. Hammer’s sake.” “Yes, yes, Mrs. Hammer,” Diamond murmured, as he appeared to be lost in thought. “She will be quite upset if I don’t… Well, thank you for your time and patience. I have other obligations to attend to, so I must be on my way.”

“Ok,” Betty stood as Diamond did. “I hope your day gets better, Mr. Jack Hammer.”

Diamond smiled and turned to leave. Through his peripheral, he managed to get a glimpse of Betty’s imitation smile transforming into a curious frown, trying to put Jack and Hammer together.

Diamond gloated with cockiness as he exited the diamond market and blended in with the busy pedestrians. Like a thief in the night, he disappeared around the corner to the parking ramp where he’d parked his rental. Not until he made it to the car did he open his hand. Between his thumb and index finger, he examined the two-carat D-class diamond that Betty had shown him. He laughed as he thought about the two-carat cubic zirconia, switched it for.

Betty had not caught on; by the time the switch was noticed, and the security tapes reviewed, Diamond would be long gone, and with him, the flawless diamond he’d cleverly swapped Diamond took the entrance ramp to the highway and steered the rental towards the airport. His flight to Buffalo, New York departed in less than an hour.

Jake provided Diamond with all the props he needed to carry out his swindles. Jake had the highest quality of counterfeit money, payroll checks, credit cards, jewelry, and anything else Diamond needed to work his magic. He even provided Diamond with some potential buyers, or ‘marks’, as they were known in Diamond’s particular line of work. Jake said, “I’m just calling to make sure you’re going to make your flight on time.”

“Good, I’ll be looking forward to meeting with you in a couple of days.”

“No doubt Jake, hey… I need you to pick up about fifty of the finest two-carat cubic zircons you can find.”

“Yeah, but I need a mark first; you think you can make something happen?”

“Whatever you need Mr. Diamond.”

Jake chuckled. “You never miss a beat, do you Mr. Diamond?”

“Not in this game Jake, I’m on point twenty-four-seven.”

“OK,” Jake conceded. “You’ve figured me out. Our agreement of ten thousand dollars is due today. I don’t think you would try to skip out on your bill but payment is due today.”

Diamond shook his head in disgust. “You’re right Jake. Obviously, you haven’t made it back to your hotel yet, have you?”

“Well, I left something for you at the front desk, payment in full.”

There was only silence.

Diamond said, “Jake, did you hear me?”

Diamond waited for Jake to return to the phone.

Moments later, Jake said, “My apologies, Mr. Diamond. I spoke with the hotel’s receptionist and received your package. I’m sorry I bothered you.”

“No problem, business is business and I’ll never mistake our business with our friendship.”

“Sorry for the misunderstanding. Enjoy your day Mr. Diamond.”

“Thanks Jake, you do the same.”

Diamond ended the call thinking, “No matter how you try to frame it; there is no honor amongst thieves”.

“Many things in life are inevitable and we are powerless to control them. Our destiny is preordained; our God has planned our course; our future lies in the unconditional power of faith, what do you believe in?”

James Scott was born in Buffalo New York in 1966. He endured the toughest streets, prison, and near death. Through the grace of God, he was given a second chance to relive his life through different circumstances. After enrolling into ITT-Technical school majoring in information technology, James began following his dreams of writing. He hopes to entertain the world with the tales of the dark side. Today, he resides in Athens, Georgia a proud father of two of God's most precious gifts.

Why, When, How, and to Whom Should We Give Flowers?