The Island of Whispers has been called Watership Down with a difference.  The difference is that there are no cuddly rabbits.  Just rats.  They live on the little island that’s tucked under the world-famous Forth Railway Bridge in Scotland.  They’ve been there for centuries.  Then a group of them attempts to flee to the mainland.  They just happen to go in the middle of the bridge’s centenary celebrations… 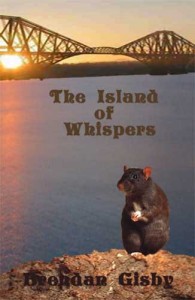 ~ Chapter One ~
It was near the end of his watch. For the last time that night, Twisted Foot sniffed the air, slowly scanned the terrain below him, and listened intently. As his narrow eyes moved gradually from left to right, his sleek black body quivered and bristled in the early autumn breeze. Far out into the estuary, a faint ribbon of yellow was spreading along the horizon, creating a thin wedge between the dark night sky and the even darker waters of the River Forth.

Twisted Foot smelled a sharpness in the air. It would not be long, he thought, until the Cold Cycle began: the time when the winds grew into shrieking, biting monsters which swept over the outside world; when the waters round the world boiled and frothed, sending up huge white creatures to batter and shake the rocks; and when hard white water clung to the high ground on which he now squatted.

The hunting packs would stop then, and there would be little work for the Watchers, only the occasional solitary vigil to guard over the secret world deep below.

He would spend much more time in the underworld during the Cold Cycle, content in the warmth and security of the Watchers’ lair. Yes, it was a time for relaxation. There would be long mating sessions with the lair’s she-rats. Later, there would be games and frolics with the newly arrived offspring.

There would also be those enthralling periods in the Common lair when Long Snout and the other elders of the Inner Circle recounted stirring and often harrowing tales from the history of their hidden world, a history which spanned many, many Cycles from the early struggle to colonise the island through to the stability and comfort of the present society.

Yet, despite his anticipation of the pleasures brought about by the coming Cold Cycle, a sense of foreboding had crept into Twisted Foot’s thoughts, causing him to shiver more pronouncedly in the pre-dawn chill.

As well as the mating, the games and the stories, that time, he knew, heralded the Selection, when the less robust and less purely formed young from each lair were sought out and imprisoned by the Protectors to await slaughter for the hungry mouths of the Inner Circle.

It was true that many of the youngsters selected would be the weaker she-rats, who were regarded as unsuitable for future breeding, and the more deformed of the he-rats, who were not fit for training as Protectors or Hunters or even Watchers. Nevertheless, the Selection was a time of immense sadness in the lairs, a time of sacrifice for the greater good of the society – and for the continued wellbeing of the ruling Circle.

Twisted Foot recalled the trauma of the Selection during his own first Cold Cycle when, as a trembling youngster, he had observed Broken Tail, the Chief Protector, scurry through the Watchers’ lair, sniffing out the weak and the handicapped, and marking each across the snout with a swipe of his sharp claws.

He remembered vividly the great fear that had pervaded the lair, the squeals and shrieks of his young playmates, and the enticing tang of blood from their freshly inflicted wounds. He remembered, too, a feeling of profound relief when the deformity from which his name was derived had gone undetected by the Chief Protector.

Twisted Foot watched closely as the rest of the hunting pack moved stealthily towards him. First came the small slave rats: there were six of them in all, but only three were fully employed. Each of the latter slaves dragged behind him one of the night’s kills, jaws clamped over the limp and bleeding neck of a young gull. Moving noiselessly behind the slaves, four more Hunters slid past Twisted Foot, this time without acknowledgment. Finally, the familiar shape of Fat One, a fellow Watcher, lumbered into view.