Intro: Son of the Dragon

Hundreds of years before Christ, the Dacians (called “Agathyrsoi” by Herodotus in the fourth volume of his Histories) were the first recorded people to live in Transylvania.  They tattooed their faces, arms, and legs according to their rank in society, and dyed their hair dark blue.

Herodotus wrote of several Dacian legends and rituals, such as the priests of Zalmoxis who kept the secret of incantations that could make human beings immortal, and the ritual practice of wrapping a young man who wished to become a warrior in the skin of a wolf (some men were said to be able to change themselves each year for several days into the form of a wolf).  Modern historians have theorized that hallucinogenic mushrooms were used in the wolf-pelt ceremony, allowing the men to experience a complete psychological transformation into wolves. 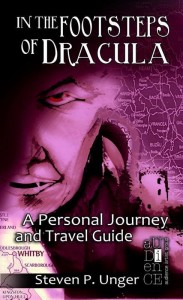 Once psychologically transformed into a wolf and thereby initiated into the Brotherhood of the Wolf, the Dacian warrior would enter fearlessly and ferociously into battle under the banner of the Wolf Dragon, an animal with the head of a wolf and the body of a dragon.  The Royal Order of the Dragon, into which the historical Prince Dracula’s father was initiated at Nuremberg in 1431 (the year of Dracula’s birth), was a branch of the Brotherhood of the Wolf, which had already survived for two thousand years.  Almost 500 years after that, a picture was taken in the early 20th Century showing a shepherd in the Pindus Mountains of northwestern Greece holding a staff with a carving of the Wolf Dragon at the top.

Roman legions first invaded Transylvania in the 1st Century B.C., and the Dacians responded by building six defensive fortresses in the Orăştie Mountains near present-day Deva at the southwest border with Wallachia.  The ruins of the six fortresses, comprising a Unesco World Heritage Site since 1999, can be seen today.  Some of the ruins include the circular remnants of sanctuaries reminiscent of a mini-Stonehenge or of the Tholos Temple at Delphi, Greece; near another fortress is a circular stone solar calendar.  The photograph below of a Wolf Dragon was carved in a stone arch as long as 2,000 years ago.  Reproduced with the permission of Shane Solow, ©Lost Trails, LLC, the picture was taken at one of the Orăştie sanctuaries.  The carving is one of the only original, intact examples of the powerful Dacian symbol remaining in the world. 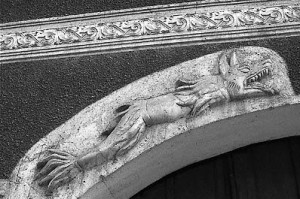 The Dacians were able to keep the Roman legions at bay for nearly 200 years, until they were finally conquered by the Roman Emperor Trajan in 106 A.D.  Rome ruled what is now Romania for the next 175 years, intermarrying until a Daco-Roman people emerged who spoke Latin.  Seven hundred years of successive invasions by Goths, Huns, Germanic Saxons, and Hungarians followed.

By the 10th Century, Romania consisted of three principalities:  Transylvania, the central part of the country, bounded by the sprawling mountain range that Jonathan Harker refers to as “the horseshoe of the Carpathians” in his first journal entry in the novel Dracula by Bram Stoker; Moldavia to the east; and Wallachia to the south.  All three princedoms were dominated by the kingdom of Hungary.  This state of affairs still prevailed in the time of Prince Vlad Dracula (Vlad the Impaler).

The ruling classes, or boyars, of Romania at the time of Prince Dracula were Magyars, who were of Hungarian extraction, and Szekelys, who believed themselves to be descended from the Huns.  Bram Stoker has Count Dracula claim Szekely heritage, and his descent from Attila the Hun, to Jonathan Harker in Chapter III:

We Szekelys have a right to be proud, for in our veins flows the blood of many brave races who fought as the lion fights, for lordship. . . . What devil or what witch was ever so great as Attila, whose blood is in these veins?

The Szekelys may be said to be the only true Transylvanians, having guarded the land’s borders long before the Magyar invasion and Hungarian rule.   Their allegiance was only to the sacred soil of Transylvania, no matter who held temporary political dominion over them at any given time.   Among their descendants are Prince Charles of England and his sons Princes William and Harry.

Nevertheless, the historical Vlad Dracula the Impaler can be traced genetically much farther back than the Szekelys and the Huns:  Dracula’s distant ancestors were the Dacian Wolf Dragon warriors themselves.

The only portrait of Prince Dracula, copied innumerable times on posters and paintings and statues throughout Romania, hangs in Castle Ambras in Innsbruck, Austria, in Europe’s first “museum,” the Kunst und Wunderkammer—the Arts and Wonders Room, also known as the Gallery of Monsters.  Even this portrait, painted in the late 16th Century more than 100 years after Dracula’s death by an anonymous German artist (the Germans despised Dracula, who had impaled thousands of their Saxon relatives in Sibiu and Brasov), is only a copy of another portrait lost in the ash heap of history.  So, no one really knows if this sinister, angular visage with the Jay Leno chin is really that of Vlad the Impaler, especially when compared with the rounded, almost serene face in the only known—and contemporaneous—portrait of Vlad’s father, a fragmented fresco recently discovered above the bedroom where Dracula was born in Sighişoara.

Interestingly, the Kunst und Wunderkammer’s portrait of Prince Dracula—descendant of the Wolf Dragon warriors—is adjacent to the portrait of a “wolf-man.”  Although this portrait of Petrus Gonsalvus (a real person) shows his face completely covered in fur except for his nose, eyes, and lips, we cannot see his palms.  (See http://www.aiwaz.net/panopticon/petrus-gonsalvus/gi1293c161.)  Bram Stoker’s Count Dracula, however, did have “hairs in the centre of the palm,” as Jonathan Harker tells us in Chapter II.

The historical Dracula’s father, Vlad Basarab, was born out of wedlock in 1392 to Prince Mircea cel Bătrân (Mircea the Old) and one of his many concubines.  Today, a statue of Prince Mircea cel Bătrân stands in the central square of modern Tărgovişte.  Always a loyal servant to King Sigismund of Hungary, Vlad Basarab fought the Turks as a guard commander of the mountain passes into Wallachia and acted as Sigismund’s representative in Constantinople to the Holy Roman Emperor.

As a reward, in 1431 Basarab was inducted into the ancient Royal Order of the Dragon, a society of Central and Eastern European knights who were charged with defending the Catholic faith against its enemies, and he was given the governorship of Transylvania along with a house in its capital, Sighişoara.

(Incidentally, members of the Royal Order of the Dragon wore a ceremonial costume—reminiscent of the clothing worn by modern movie Draculas—incorporating a black cape over a red garment, to be worn on Fridays and during the commemoration of Christ’s Passion on the first Tuesday after the eighth Sunday before Easter.  In another odd coincidence, the last remaining group of people claiming membership in what they say is a continuing, though underground, Royal Order of the Dragon is the Oltean family of—where else?—Bistriţa, in Transylvania on the road to the Borgo Pass, the site of the fictional Count Dracula’s castle.)

From the day of his induction into the Royal Order of the Dragon until his death, Vlad Basarab referred to himself as Vlad Dracul.  “Dracul” is the Romanian word for “dragon”—and it also means “devil,” as Bram Stoker discovered while researching his novel.  The suffix “a” means “son of,” so when Vlad Dracul’s second son, also named Vlad, was born later that year in Sighişoara, he became Vlad Dracula, Son of the Dragon.

The 2nd Edition of In the Footsteps of Dracula:  A Personal Journey and Travel Guide, available now from its dedicated World Audience Web page.

The First Review of Dracula Ever Written, Published in the Manchester Guardian on June 15, 1897;

A Rare Photo of a Wolf-Dragon, the Original Source of the Name “Dracula,” Carved Within the Ruins of a Prehistoric Dacian Temple in Transylvania; and much, much more

Monica M. Brinkman Aug 24, 2014 2
Express Yourself in Writing I don’t know many authors who have not ventured into joining a writers group of some…
Book Review