While I sat at the table minding my business, someone I did not recognize approached me. “Hey, you look familiar, very familiar!” I didn’t have a clue who this person was; she was a stranger to me. I just gave her a blank look; then a faint smile and replied, “Well, I don’t remember who you are; can you refresh my memory.”

She pointed and said, “Oh I remember now, I saw you at the restaurant; I was with Vanessa.” 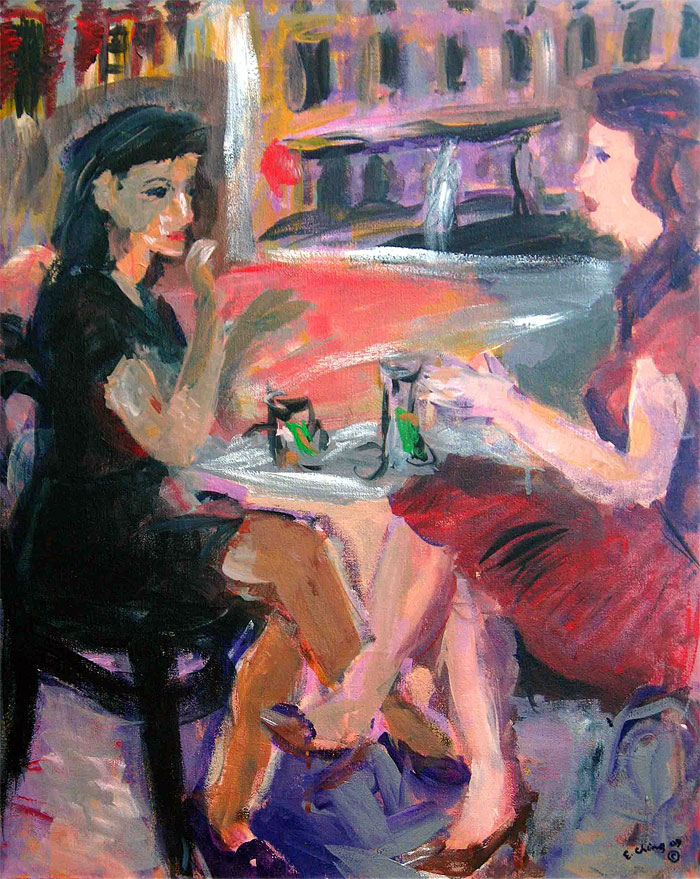 I didn’t really pay attention to the other people with Vanessa that day; my goal was to get out without her noticing me. I was surprised that this woman remembered me after my quick disappearance from the restaurant. I guess it was safe to assume that this woman was also gay. I just wanted her out of my presence.

“Well it was nice seeing you again, do you frequent here often? I know Vanessa would love to see you again,” she asked out of curiosity.

“No, I don’t, I only came here to accompany my friend Greg over there,” I said pointing in Greg’s direction.

“Right, I understand where you’re going with this,” she replied as if she didn’t believe me. Her reaction to my words made me boil and I immediately got up to leave. Macie, who was more than astonished by now, told me to ignore her and enjoy myself.

Macie didn’t care what people thought about her, but I did. I grabbed my purse, said goodbye to Macie and went over to say my goodbye’s to Greg. Greg was in full blown conversation and barely even heard me when I told him “goodnight, I’m leaving now.”

I really didn’t care, because all I wanted to do was get out of there as fast as possible. As I made my way to the door, someone pulled me by the sleeve. To my disbelief, it was Vanessa.

I was guessing either her friend called her and she got here in a flash or she was already on her way over. Whatever it may have been, I wasn’t for her shit that night. “Let me go,” I said in an even tone voice. She did let me go, but she just stood there looking at me. I could not believe the set of balls on this woman. She never took no for an answer. Her determination to make my life miserable

“You know, I am beginning to think you are stalking me,” I replied as I crossed my arms.

“Really, then why are you here?” Look around this is a bar for gay people and if you are not gay then you are free to never come here again!” she replied, then turned and walked away.

I didn’t really know how to feel at that point. I hadn’t thought about it that way. I was in her territory probably screaming “I am a closet gay.” I mean she had the right to think I was gay as much as I came to the bar with Greg and Macie. She probably thought that Macie was gay; maybe even my woman.

Despite my feelings about this woman, I felt the need to apologize for my rude behavior. Having a conscience was one of my strong points. I walked over to her with small strides; thinking of what I would say. She was standing by the bar talking to an unfamiliar lady when I came over. I gently tapped her on the shoulder and she turned around in awe.

“How may I help you?” she said as if she never tried to hit on me. “I just wanted to apologize for the way I came off with you. I don’t normally act like that.” I said clutching my purse out of nervousness.

“Thanks, I appreciate the apology, but you didn’t owe me one.”

“No, no, I have been really unfair to you just because you are….” I stopped because I didn’t want to label her.

“Gay, I don’t have a problem saying it and neither should you. I am not ashamed of what or who I am. I tried to hide it at first, but it frees your soul when you finally come to grips with it; know what I mean.” she said with a half of smile

I don’t know why, but I returned a smile. I believed that Vanessa was a genuine person, just different in her sexual preference

. Our conversation ended at that point, but somehow I begin to feel differently about her…not her preference, but the individual.

I Wish I Tumbled