Ayo, where are you? Ayo…? Kailene frowned. Her inner Eye could not pick up on her guard-hound. Perhaps it was nothing. Ayo may have simply not been casting his farsenses. The dogs could become fatigued by too much mental activity. Still…

Rowt, she called to her second hound. Rowt’s happy voice sounded within her mind. Leave your patrol and find Ayo. She ran her fingers over the dagger-holster strapped to her left forearm, hoping nothing had happened.

“Anything amiss, honored Marshal?” asked the First Prelate. The short, elaborately coifed and robed priest stood with Kailene. Kailene wrinkled her nose at the man’s strong perfume as he added haughtily, “I realize this is your first watch but the Priest-Mage’s warding spells should be sufficient to block any intrusions

Kailene nodded curtly, wishing the First Prelate would go do something else. He reminded her of her first sponsor after she had finished her training, exceedingly vain and prissy. It was a wonder she had gotten anywhere under that one’s patronage.

Still, she noticed the man fidgeted, his eyes roving the rooftops of Olan City and beyond as if searching for something. “And you, noble lord,” she said, noting his anxiousness. “Anything amiss with you?” 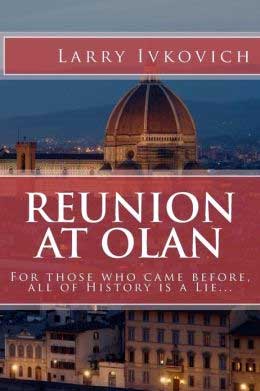 “Ah, no, no.” The prelate’s hands fluttered like birds. “It is exciting, is it not? To host such an important gathering? I admit to being a shade nervous.”

Kailene grunted and turned back then to the business at hand. The Shawn-Ryn peace delegates and their security contingent had finally arrived. They had been escorted through the city and then stopped at the outer moat, the gate lowered in courtesy as they were questioned by the frontline guard. A member of their congregation had been picked as the ceremonial hostage, to remain at the outer gate tower with a corresponding Galan-Hei member until the conference was over.

After passing that first security check, the Shawn-Ryn now approached the inner moat and the Set’s main keep. The officials and troopers traveled easily on horseback while their slaves carried boxes and chests of supplies or bore ceremonial banners. Six specially masked, bare-chested servants pulled a large, covered wagon in the middle of the procession.

Kailene studied them from the upper rampart as the group of delegates, servants and troopers crossed the inner moat bridge. By custom, the Shawn-Ryn officials wore ceremonial robes complete with intricately sewn facial hoods that covered their entire heads. They were an intensely private race. Their religious doctrine specifically prohibited their faces to be revealed in public outside their prefecture except under certain conditions.

This conference must be anathema to them, Kailene thought distastefully–to force the Shawn-Ryn to be under such scrutiny, especially during Frenten’s Eve, a holiday their kind didn’t celebrate in any case, showed that the Shawn-Ryn were serious about the conference.

The troopers likewise were clad in visored helms, their armor looking to be more light-weight and flexible then other such garb. Here at the last checkpoint, they would hand over all weapons and banners to the Set’s paladin guard per conference precepts.

Kailene looked curiously at the large, decorated wagon. Gifts for the Galan-Hei and the Bishop-Prefect, she mused thoughtfully. But the conveyance is bigger than what we were told it would be.

The lead trooper halted the procession and formally announced their arrival to the Set guard in a loud, booming voice. All proceeded as ritual at this point–protocol would still be observed. The paladin of the gate cried out in response and ordered the inner gate doors to be opened.

At that moment, a cry reverberated within Kailene’s inner Eye. She blinked in surprise at the intensity of the sound, the pain. It was Ayo but the hound was terrified and hurting. Kailene gasped as blurred images formed inside her mind.

Men and women–dead and stripped of their clothes; the ground soaked with blood; smoke and fire burned and drifted everywhere. Ayo whined, his mental tether to Kailene fading in and out. Ayo! she shouted into the aether. My boy! What has happened?

Ayo brought a view of one of the dead closer and sharply into focus. Kailene knew the effort it must be taking on her beloved hound. But she saw… a ring on the corpse’s finger… its stylized design…

By the Seven, she thought in horror. It is the royal sigil of the Shawn-Ryn. She turned her mental focus to her second hound, trying not to let her thoughts betray her. Rowt! Hurry to Ayo. Here is the way. Tend him!

The gate was almost completely opened.

“No!” Kailene shouted, shocked realization rushing through her. “Close the gate! Prelate, sound the alarm!” She ran past the surprised priest and leaped down the stairs three at a time. “Eleanor! Kain!” she cried out to her two nearest personal guards. “They are not the Shawn-Ryn!”

Too late. The troopers at the front of the procession charged the opened gate, using their horses as battering rams to force their way through the group of paladins. Brandishing suddenly-drawn swords and axes, they cut down the surprised guards at the gate entrance. With an ear-splitting cry, the slaves pulling the wagon heaved and dragged the conveyance halfway through the front entrance, smashing into the gate doors and effectively keeping them from closing.

Kailene drew her sword and threw off her cloak as a gong sounded from somewhere behind her. The alarm–the First Prelate wasn’t so worthless after all.

She hit the courtyard tiles running just as the five members of her personal guard began their own defensive attack. The ringing of flashing steel and the cries of the combatants shattered the air. Behind her, more of the Set’s paladins stormed into the courtyard.

These impostors are outnumbered, Kailene thought, parrying a sword thrust by one of the invaders. What are they trying to do?

She brought her sword up and around, deflecting her attacker’s blade. And then whirled back again to pierce his armor, chest and backbone. Jumping over the falling corpse, Kailene ran toward the gate, seeing her personal guard fighting alongside the Set’s paladins.

The foot soldiers of the enemy unleashed a storm of bolts from their crossbows. Kailene ducked behind a statue of one of the Imperium’s ancient heroes, others under attack following her course. The bolts exploded upon impact, the deadly projectiles cleaving men in two and breaking stone into rubble. Explosive weaponry, she thought frantically. What magic is this? She whirled at a cry from behind–a horse and rider charged her, the rider swinging a battle axe at her head.

Instinct and training kicked in as Kailene dropped and rolled under the deadly blow. She regained her feet as the rider ran his horse past her but whipped around for another pass. Kailene stretched out her mental focus to touch the horse’s mind. Her power wasn’t much without her hounds to amplify it, but it was enough to confuse the horse. The animal slowed, snorting in fright as its rider screamed at its sudden indecision.

Kailene leaped up and jerked the distracted rider from the horse, knocking him to his back. Her sword found its mark again as she thrust it through her attacker’s midsection.

Kailene looked toward the sound of Eleanor’s voice. Her second pointed frantically to the rear of the courtyard where Galan-Hai troopers were now streaming in to join the battle. Too many, she thought in alarm. The courtyard and bailey are too small for so many soldiers. Too crowded…

She started, her eyes widening, as she looked at the battered wagon. It’s bigger than it should be, she thought again. The attackers are so few, the crossbow bolts…

“Eleanor!” she screamed. “Kain! Everyone! Fall back!”

The wagon exploded. Tongues of fire, balls of flaming gas and deadly columns of detritus erupted from it, shattering the inner gate and its supporting ramparts. Men of both forces fell burning as debris of the siege wall itself rained down on the Set’s courtyard.

A hot wind plucked Kailene off her feet and tossed her through the air like a doll. She hit something hard and lay still. No, she thought, groaning. I won’t let this happen. Not on our first watch! She struggled to her feet, sword still in hand. Her head flared in pain.

Something fell like rain, spattering against the tiles. Blood, she thought, sickened. A severed head, that of the First Prelate, gaped open-mouthed at her only a few steps away.

The inner gate was aflame and in ruins. Most of the attacking forces, their mounts and the Set’s paladins were dead, bodies and body parts strewn everywhere. Kailene’s stomach roiled, her head spun. She felt blood trickling down the side of her head.

Another explosion rocked in the distance. The outer gate, she realized. They’re opening up the Set’s defenses for a larger attacking force. The hostage must have hidden a weapon somehow.

“Kai!” Eleanor ran up to her, blood streaming from a shoulder wound. “Are you all right?”

Kailene turned toward the Set proper. “We’ve got to get inside. Protect the Bishop-Prefect and the Galan-Hei delegates. Kain? Nestra? The others?”

“No!” Rage blossomed within Kailene. “Those filthy animals!” She stopped hard. A corpse lay before her and Eleanor–one of the invaders. The facial hood had been ripped from its head. Covered in tattoos

, its dark, broad-features stared up at her with lifeless eyes–red, unblinking eyes.

Kailene felt the bile rise in her throat, heard Eleanor’s gasp of disbelief. Perliox, she thought in horror. It’s the Perliox.

Dellani Oakes Nov 9, 2011 0
Fran Lewis is an amazingly talented, creative, inspiring and thought-provoking author. She's also one of the…
Writing