Unaware of the gazing sun’s effect on his recently discovered disguise, Mungai moved closer to the pack. 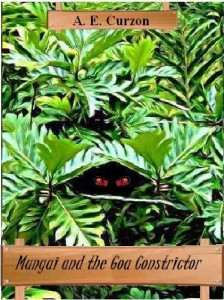 In the ever increasing heat of the second day, the dung had started to harden and began making a crackling sound as he moved. Each crunching, faltering step he took sounded like a predator crushing the bones of its prey. He thought the dung had made him invisible, but in trying to get closer, he was reminded of how highly tuned a wolf’s hearing was.

Sahba, chief wolf and council member of the Jungle Elders of Wolves and other Tooth and Claw, was instantly aroused. He immediately alerted the rest of the pack and then, with the same alacrity, collapsed laughing as he set eyes on Mungai. He could only take pity on him. Mungai was beyond description, or more to the point beyond Sahba’s description.

The only parts of Mungai still visible were his eyes and the tip of his nose, and up close the smell was surprisingly offensive to any beast. What’s more, the dung had baked his mouth shut. Excuses and pleas were out of the question. He was so completely matted in the stuff, he could barely move.

Amelia Curzon is the author of the children’s/YA book Mungai and the Goa Constrictor.
Having grown up in the Mediterranean and having later lived and worked between the Channel Islands, Italy, the United States of America and South Africa, Amelia eventually settled permanently in the United Kingdom.
Amelia is the mother of two grown children and her interests are horses and all other animals, the environment, reading and of course, writing. Her concerns for the environment and the shaky future we have provided for so many species are very high on Amelia’s agenda. Amelia supports Greenpeace, Rainforest Action Network, Friends of the Earth, the World Wildlife Fund and various other international causes against cruelty to animals.
Mungai and the Goa Constrictor is the author’s first published work which has already gained its first 5 star review. She is currently working on a sequel.
Email: amelia.curzon@gmail.com
Website: www.ameliacurzon.webs.com
Facebook: https://www.facebook.com/amelia.e.curzon
Twitter: https://twitter.com/#!/AmeliaCurzon