Lady Justice and the Candidate

“Walt,” Mark continued, “I’m sure you’re aware that this is an election year.” 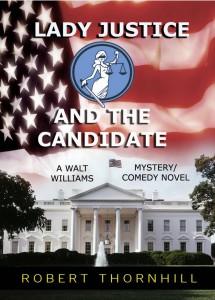 Duh! How could you not know? At least fifteen minutes of every TV hour were filled with campaign propaganda and since the beginning of the year, the newspaper had been reporting primary results ad nauseam.

“So what does that have to do with me?” I asked. “Looks like the slate is set. The President is a shoo-in and the Republican guy seems to have wiped out his remaining challengers.”

“Then I guess you haven’t heard of Benjamin Franklin Foster.”

“If you haven’t, you soon will. It seems that many Americans aren’t exactly thrilled with either the socialist Democrat or the snooty, rich Republican.”

I could certainly understand that. I could never figure why, out of a population of over 300 million people, we can never come up with two truly qualified candidates to run for the highest office in the free world.

“He’s an independent, not affiliated with any political party, and he’s causing quite a stir.

“His message is ‘reform’ — everything from the U.S. Tax Code to the abolition of the Electoral College.

“Take your pick,” he replied. “It’s in the best interests of both political parties to maintain the status quo.  No one wants to admit it, but our government is built like a house of cards. The balance of power is precarious at best and if any one agency or department is affected, the whole thing could come tumbling down.

“The alliances that exist have taken years to form, and they reach from the local precincts to the halls of Congress and even to the White House itself.

“The policies that Ben Foster is promoting would disrupt all of that and no one on either side wants to lose their position and influence.

“There are powerful people out there who want to see the man dead.”

I understood what he was saying.

A year earlier, I had been involved in an undercover operation involving the collusion between a giant pharmaceutical company and corrupt politicians.

An assassin had been sent to kill a holistic physician that was poised to disrupt the ‘status quo’.

Our investigation uncovered a tangled web that included a local law firm, the Department of Corrections, the Food and Drug Administration and a U.S. Senator.

“I see your problem,” I said, “but again, what does all this have to do with me?”

He handed me a photo. “Meet Benjamin Franklin Foster.”

I took the photo and it was like I was looking in a mirror.

If my mother had sired identical twins, this guy could have been my brother.

I didn’t know what to say.

I had an idea where this might be going, but the concept was just so outrageous, I quickly dismissed it.

“Here’s the situation,” Mark said. “Once an individual becomes a viable candidate, he is assigned a Secret Service detail.

“We have enough creditable intel to know that the man’s life is in danger and it’s our job to protect him.

There it was — I was being offered the job of sacrificial lamb.

Mark could see the wheels turning. “I know how this must sound —.”

“Do you really?” I said, cutting him off. “This Foster guy is important enough that you’re willing to set up a private citizen for his enemies to bump off — your own flesh and blood, for chrissakes!”

I didn’t mean to say that, but it just came out.

“Then what happens when I’m blown away? Will you have another stooge waiting in the wings?”

“Walt, you’ll have the same protection that we give to the President of the United States.”

Mark looked at the captain. “I knew this was a mistake. Sorry I wasted your time. Good to see you again, Walt.”

He rose to leave, but my curiosity got the best of me.

“Exactly how would this work? I’ll always wonder what fantastic scheme you guys had cooked up for me.”

I saw the captain stifle a grin. He knew I’d take the bait.

Mark returned to his chair. “For the next four months, Foster will be cris-crossing the country on the campaign trail. He will be making speeches and personal appearances and most likely participating in debates with the other candidates.

“During those times, he’s on his own. You would accompany Foster everywhere and when his speaking part is over, you would take over to ‘press the flesh’ so to speak, to mingle with the crowd, shake hands and kiss the babies.”

“So he gets ushered off to some safe place and I would get to parade around when the exposure is the greatest.”

“Why would anyone in their right mind agree to such an arrangement? It sounds very much like a suicide mission.”

“I can’t answer that, Walt. Why do brave men join the Secret Service when they know that their job might require them to take a bullet for the President? Why do soldiers enlist when they know they may be put in harm’s way in Iraq or Afghanistan? Why do you come to work here every day, knowing that your next car stop might be a guy high on PCP?”

I suppose that I’d never thought about it in those terms.

“Will you do one thing for me?” Mark asked.

“Ben Foster will be in town tomorrow. All I ask is that you meet the man and hear what he has to say. If you don’t like the guy, just walk away — no harm, no foul.”

“I suppose that I could do that. Let’s say that after I talk with him, I’m interested. What then?”

Mark and the captain exchanged looks.

Lady Justice and the Candidate online.

Tuesday: You are the Troops who Vote