“Katrina, Sin of Love” is my first romance novel. It takes place in Romania, before and right after World War II starts. Anton, the son of a rich boyar family, spends his last teenage summer holiday at his parents’ manor.

There, he meets Katrina, a beautiful peasant, and he wants to have a summer fling with her, but, instead, he falls madly in love. His parents, however, have other plans for him and that’s when things start to get complicated. 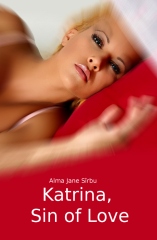 Chapter 1
It is the summer of 1937. If we were to sail southwards on the Danube river, near the town of Giurgiu, we would see on the right side a small village spread along the riverbank, almost always shrouded in the mists rising from the troubled waters.

The main road – the only street in the village – displayed rows of small adobe houses, with low-to-the-ground roofs made of reed and narrow windows to keep out the sun in the summertime and the cold during winter. Most of them were whitewashed and each of them rose up in a large yard, where there would also be a stable with livestock, those few animals that remained, now that the tax collector had passed by. He’d gathered all he could take from each household, either livestock or grains, leaving behind only sorrow.

Tired faces, wrinkled with worries, appeared now and then in the gateways and only nodded at each other, without uttering a word. On the narrow, unpaved road, each gust of wind would raise the dust and carry it into the children’s eyes, as they were trying to play with whatever they could find, on their way home from the tiny school situated near the wretched church in the middle of the village. The children, too, were as sad as their parents, and they were all as thin as rakes. Having skipped the first two meals of the day, they were heading home hoping that their parents might have caught a fish or two, so they would have something for dinner.

In all this sadness and gloom, if you looked carefully at the water’s edge and if you pricked up your ears, you could see a fair-haired young girl, svelte and breathtakingly beautiful, as she was thoroughly washing some laundry and singing a song that anyone would stop to listen. She took such pleasure from her labor, it was hard to imagine. She had tied her long skirt up with her waistband and she would constantly bend over the water’s surface, showing her delicate round thighs. With every jolted movement, her full bosom would come out of her cleavage, waving gently.

From afar, a horse neighed and a clatter of hoofs came straight to the water’s edge. The girl looked up to see the young boyar jump from his saddle and moving towards her.

– How do you do, Katrina, why are you out here on such a scorching heat?

– What am I to do, boyar Anton, I’m washing this laundry from the manor, your mother asked for it swiftly.

– You foolish girl, you’ll catch a sunstroke in this heat, and I won’t find another one like you in the entire county!

– What do you mean, if I catch some sun-whatever, I will die?

– You might, if you keep coming every afternoon to do laundry. Why don’t you leave the washing for later, when the day cools off, and now we could use a dive in the Danube?

– You must be joking, young boyar! I won’t go in the water in front of you… I’m embarrassed and then… I don’t know what you want from me…

– I want you, Katrina, to kiss you and caress you under the moonlight all summer long, because, come fall, I’m off to Vienna for three whole years.

– Mister Anton, said the girl aloof, I don’t believe you mean what you say. You may be the boyar’s son, but I don’t care a whit to become your mistress!

– Why wouldn’t you, girl? I’m not ugly, nor fat, my eyes are blue like the sea and I love you to death, dear Katrina!

– Listen to me, sir. I will not be with someone like you… You may be handsome and smart, but I will love somebody else, someone like me, I mean poor but honest, so… The girl picked up her clean laundry, put it in a wicker basket and got out of the water, heading towards her home, not far from the river bank.

Anton called out to her.

– Katrina, hold on a minute, let’s talk about something else!

– We’ve nothing else to talk about, young boyar. Have a good day! Said Katrina and went inside her house, leaving him in the lurch.

Behind her, the young boyar spat angrily and muttered through his teeth :

– You will be mine by the end of this summer, Katrina!

Chapter 2
Leaving the village on the way to the town of Giurgiu, you would run into a paved road leading to a forest. Here, the wheat fields met the deciduous trees, silver beeches, birches and majestic old oaks which had been guarding this area for centuries. Several hundred meters deep inside the forest, there was a grandiose mansion, a large house with twenty rooms and a circular terrace at the main entrance, with Greek columns all around. The manor had large windows and it was covered in a blanket of ivy. The terrace was a place for relaxation for all residents; furnished with wicker, here they would have their meals in the open air in the summertime. Behind the main house there were the servants’ residences and the stables for horses and cattle, the pigsty, the aviary with chickens, ducks, geese and other poultry that could be readily served at any meal, be it for whim or hunger. Coming in through the large gateway and seeing the multicolored rosary, beholding this enchanting landscape, one couldn’t possibly imagine that, very close nearby, people were almost starving to death because of that year’s drought.

On the terrace there was a light-haired young man, wearing spectacles and having a bookish mug. He was sitting on a wicker armchair and was reading the newspaper. He felt so hot that, every now and then, he would lift up his hat and idly wipe his forehead with a handkerchief. His name was Ovidiu and he was, obviously, a city boy. That’s because, in that awful heat, he dared put on a suit and tie… and on top of that, he was wearing a straw hat which kept him in the shade, indeed, but, at the same time, it kept him so warm that he was constantly dripping with sweat. He and Anton, the son of the Mândrescu boyar family, were classmates in high school, and he took pride in being his best friend.

In the large house lived the Mândrescus, Mister Aristide and Madam Emilia, and their son, Anton, who was fresh out of high school and getting ready to leave for Vienna in the fall, to study Law. But until then, he was enjoying his summer holidays with a life of leisure at the manor. And if he could also have fun with some girl from the village, that was even better.

Drowsy because of the heat and boredom, Ovidiu heard a clatter of hoofs. He looked towards the gateway and saw Anton getting off the horse at the stables.

– Hello stranger, where on Earth have you been all this time? We were waiting for you with lunch. Since you failed to show up, eventually we ate in trio, me, Mister Aristide and Madam Emilia.

– I was at the Danube, to see how the water level dropped since spring, when it last rained.

– Have you brought any fish? I could eat some catfish, mmm, my mouth is watering at the thought…

– I see you’re getting lazy. You should have come with me to take a ride, make some exercise…

– What exercise? I could sleep forever in this heat. Did you see something interesting in the village? Any woman there good for a roll in the hay?

– Women like that you can find only in the city, Ovidiu. Here you see hot little country girls who raise their skirts up to their waist and do laundry by the river.

– You’ve seen such a thing and you didn’t call me to watch with you? Shame on you! Next time we’re in Bucharest, I’ll leave you at home like a fool and I’ll go solo to chase skirts!

– Shut up, jinx, I only saw Katrina, the daughter of Old Marin, our stableman. But she’s ten times worth, you have my word! She’s tall and thin, with long, golden hair, loose in the wind, her eyes lively and black, you get the chills when she looks at you, even on this heat… But I didn’t get anywhere with her. She turned her back on me, the little prude; she said she’s hanging out with some peasant boy of her own kind… She won’t be with me, like I’m some sort of leper!

He sighed off his sorrow and went inside to wash his hands, because he was starving. Well, there was no easy way to win Katrina’s heart…

Alma Jane Sîrbu was born in the '60s, in Romania. Her childhood and youth have been a extensive period of amassing artistic and cultural knowledge. Following prolonged torments and having read countless romance novels, she decided to write her first novel. Being an ardent admirer of the romantic style between the two World Wars, she chose to write about this glorious period of the Romanian society in her personal tone and voice.