Discovering Destiny was the last thing Andrew Greer expected. Alone in a desolate cabin, Andrew Greer was perfectly content to wait out the blizzard with his adventurous dog, Shadow, as his only companion. Fate decided differently.

When Shadow discovers the unconscious and injured woman, Andrew has no choice but to take her to the safety and warmth of his retreat.

Destiny weaves a tale of kidnapping and murder. Is she the witness and victim to the crimes? Or is she really a conspirator getting away with murder? Andrew is determined to protect Destiny and find out the truth. Can he find the real killer before it’s too late? Or has he already found her? Only Fate knows for sure. 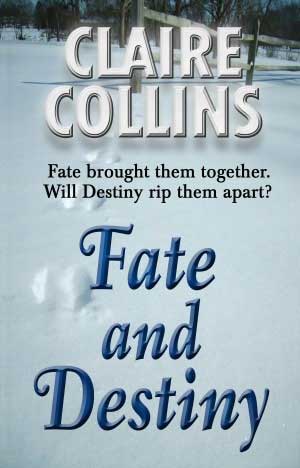 The man reached across her and flung open the truck door. With her last ounce of strength, she opened her eyes and looked at him, trying to reach out and grab him. The giant of a man shoved her through the door as her arms flailed helplessly. Her numb body tumbled down the embankment from the road. She couldn’t have stopped the momentum, no matter how much she wanted to. Her body wouldn’t do as commanded and her mind wanted to follow it into the dark, unfeeling place.

Pain shot through the fog in her head as her leg cracked against something stuck precariously from the snow.

If determination alone could have saved her, she would have risen from the snow and walked down the mountain. Fate wasn’t on her side.

Determination gave way to surrender as her head slammed into the landscape. Before her eyes shut to protect any remnants of sanity, she saw the truck turn and disappear down the road as barking from the hounds of hell erupted around her.

With the temperature dropping by the second, Andrew Greer slid as much as he walked, risking broken bones with every step. The end of his scarf slipped from around his neck, loosening enough to allow the demanding wind access to his nose. He glanced back wistfully at the cabin. A finger of smoke curling from the chimney beckoned to him, calling him in that direction. Warmth. Security. Coffee.

Wrapping the coat tighter around him, Andrew walked around the corner of the cabin. Across the clearing, Shadow leisurely sniffed a frozen tree stump. It must be nice to have a built-in fur coat. Although a pelt of fur ten inches thick would not ward off the cold today.

He set his mind back on getting the supplies from the shed as soon as possible before the blizzard resumed its fury. He’d been snowed in for the last two days.

Andrew cocked his head, standing still, and listening. The vehicle passing on the roadway sounded bigger than a snowmobile but it was hard to tell with the sounds echoing from snow banks and carried on a howling wind.

Assuming someone dared to clear the road, a fresh batch of slick, wet snow and ice would soon recover it, wasting the effort.

Piling the last of the provisions in the cabin, he made one last trip around the edges of the building looking for damage. Convinced the structure was sound, he pulled the scarf down from his face, piercing the frigid air with a long whistle. The sharp sound was an alert to Shadow that it was time to go back to the cabin.

The stark trees mixed with the full varieties of fir and rocks poked from the mounds of white. The wind ruffled the dunes of snow. Dog tracks disappeared into the forest, but nothing emerged from the trees at the familiar call.

Keeping an eye on the edge of the trees, he returned to the front of the little building, calling the dog’s name. The wind stung more fiercely the farther he went from the cabin.

Barking erupted from the woods.

“Here I am working and he’s out chasing rabbits.”

An uneasy feeling slithered through his stomach at the fierce barking. He reached into his pocket, his hand circling the Smith & Wesson .38 he carried for protection in the wild. His feeling of security renewed, he pulled the scarf tightly around his head and delved into the woods in search of the dog.

The dense trees along the path blocked some of the wind but not all. Icicles shook loose from the tops of the trees. They rained down on Andrew as he dragged one foot and then the other out of the snow. Bracing against trees helped him wade through the white quicksand. He progressed about twenty feet before Shadow appeared on an elevated patch of ground where the snow was not as deep.

Instead of lumbering up to Andrew and begging forgiveness for wandering off in the middle of a storm, the dog sat down and whined; much to Andrew’s discontent.

“It’s about time, you stubborn animal. C’mon Shadow, let’s go back inside.”

Shadow refused to budge and whined again. He looked at Andrew, let his tongue lag to the side, wagged his tail, but still refused to move.

Logic failing, Andrew tried again. “I put food in the cabin. How about a nice big bowl of warm water?”

“Shadow, I’m too old to be chasing you through the snow.”

At thirty-three, Andrew was far from old, but the dog didn’t need to know that. Andrew could not believe he reduced himself to using a guilt trip on the dog. He also couldn’t believe it didn’t work.

For every step he took closer, the dog grew more excited. When Andrew was within a few feet of the dog, Shadow began to bark again and turn in circles.

Frowning, Andrew looked at the dog.

“Why are you being so weird? You’ve seen animals in the woods before.”

Andrew followed the dog through the snow, retracing the path the dog took to find his master. Soon, they would reach the road.

Suddenly, the dog ran to a large rock, urgently spinning in circles, sniffing and barking. Curious, Andrew followed the crazy dog around the side of an enormous rock jutting from the landscape.

Expecting to see an animal carcass left by a larger predator, he began to pick apart the scene in front of him, sorting out the vision in his mind between his expectation and reality. His feet stopped moving.

A body lay crumpled against the boulder. Tennis shoes, a pair of jeans, a leather jacket, and a pale face. None of which belonged a few hundred yards from his cabin. Andrew did not know this woman. He stood frozen in place, disbelieving what he was seeing as the memory of another body in a car flashed through his mind.

Morbid curiosity pulled his attention to the body in the present, pushing away thoughts of the body in the past. Feminine features and deathly white skin framed by hair pulled into a ponytail. Long lashes graced high cheekbones over the closed eyelids. A bright red slash trickled down from a gash just below the hairline and flowed into a darker, drying patch that was pooling near her ear.

He gripped a glove with his teeth and yanked the leather from his fingers. He felt along her frosty skin for a pulse, but the freezing temperatures quickly absorbed the feeling from his hands.

He couldn’t find a pulse.

With his heart thudding and nausea rolling over him, he turned his face from the body. A furrow marked the snow where the body had rolled down the embankment. The hill sloped sharply up from the boulder to the road that led from the lake, past his driveway, and down into the small town. The cold and snow nipped at his nostrils and stung his eyes, reminding him of the temperature.

There didn’t seem to be much hope for the poor woman tossed carelessly against the rock; however, there may be others still alive in a wrecked car.

Regaining his ability to move, Andrew climbed up the side of the hill to the road, slipping on ice patches and steadying himself with his gloved hands. Reaching the road, he glanced left and right. Nothing was there, the vehicle he heard earlier long gone. Like the groove down the hill, snow started to erase the tracks left in the deep, quickly refreezing slush.

From the traces remaining, a truck with snow chains covering the tires turned around on the narrow road right at the juncture of the driveway to Andrew’s property. His cabin sat far enough from the road and down the hill that even in perfectly clear weather, passersby could not see it from the top of the driveway. Deep snowdrifts still blocked the road going up the mountain while the road heading downhill was clear.

He stepped into the tread pattern and his boot slipped. The road was turning into ice under the snow from the exhaust of the truck that came up to his driveway before turning around.

Insistent barking pulled Andrew back to reality. The barks became loud whines as the dog sniffed around the body and began licking the face.

Andrew scrambled down the slope.

“What are you doing? Leave her alone!”

Shadow ignored him and continued licking and whining. The dog seemed to be running out of patience with Andrew and his lack of interest in the body.

Halfway down, Andrew’s foot caught on a hidden tree root. He stumbled and slid the rest of the way down on his backside. Reaching the bottom, he scrambled to his feet, swallowing hard.

His boots found no traction. One foot slipped just as Shadow moved, splaying Andrew down flat on the ground. He found himself face to face with the unknown woman

Before he could jump up, back away, or even breathe, there was a slight movement over the woman’s face.

Andrew stopped moving. He held his breath and waited.

There it was again. He focused his eyes just above the slightly open lips.

Claire Collins resides in North Carolina and writes across many genres. She loves reading when she gets the time around her family and her work schedule. She currently has two novels available through Second Wind Publishing and is working on her third, Seeds of September.