How could  a fine institution, born in Europe and perfected in America, disappear in little more than 100 years?

“Here  is My Life in the Fine Stores.  I hope it will bring fond memories to  many and a glimpse of what it was like to have superb service.  tasteful, well-made garments offered in stimulating surroundings. I doubt they will return.” –Louise Thomas

“What a fascinating account Louise Thomas gives us of the grand old days of the grand emporium! An easy, conversational style makes her memoir as much a pleasure to read as a letter from a good friend, yet it is an instructive lesson in American retailing history.” –Bryan Haislip, Former Editorial Page Editor of the Winston-Salem Journal

Our paths have intertwined for years. Our interests, though wide, were never far apart. We often fail to complete a conversation. This will be my chance for the last word. A cold, confining winter seems a fitting time to reminisce and try to answer your questions about what happened to the grand old emporiums we were introduced to when we lived in New York City. To this day, we have not accepted the mundane life without them. With the arrival of spring, my mature garden will start unfolding daily and will steal much of my time if only to walk the stone paths in the woods and admire each peeping bulb. Snowdrops, aconites, wood hyacinth, grape hyacinth, bloodroot, trillium, hellebore, Jacob’s Ladder, Virginia bluebell, followed by jonquils and beds of colorful primrose is a pallet that only nature can paint. 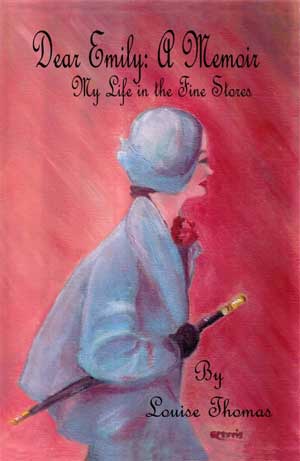 Although I cannot recall exactly how you and I met, I feel that we must have been introduced by your apartment mate, since she and I worked in the same building at NACA (now NASA), at Langley Field, in Tidewater, Virginia. Several months of practice teaching had turned a would-be-teacher into a mathematician for engineers doing aeronautical research. Filled with ambition, I realized that I was not suited for a government job. Also my work was not that interesting. It seemed to me that those who only clocked in and out got the same salary increase as those who were dedicated. At the Flight Tunnel, some of the engineers projected the image of being more interested in the sailboats they were building after work and on weekends, than the project to which they were assigned. Did you work in the same building as Betty Anderson?

Your decision to move to New York and your glowing reports gave me the courage to follow. Two visits in the prior eighteen months had convinced me that it was the fashion hub. Thank you for a grand introduction.

Remember when 5th Avenue was the fashion street of the world! Paris, Rome, and London had been devastated by the war. Before World War II, all high fashion came from Europe. Couture buyers from the best stores made four crossings each year with steamer trunks in tow, and never missed an opening. After the War, smart merchants in New York encouraged promising young American designers to be more creative. Claire McCardell was the first American designer on the cover of “Time“. She was a Parson graduate and was hailed as the launcher of American sportswear. Europe emerged from the war so battered that it was years before the high fashion lines were ready to entice foreign buyers. With the European market in limbo, Pauline Trigere and Norman Norell opened showrooms in New York; Charles James followed from London. Fashion offerings in the hinterland had never been so enticing.

How fortunate we were to be able to browse and, funds permitting, make an occasional purchase at Bergdorf Goodman, Bonwit Teller, The Tailored Woman (known for its wide assortment of coats), DePinna, I. Magnin, and Saks (the salesgirls were fashion plates). Past 42nd Street and the library was my favorite store—Lord & Taylor, under the leadership of Dorothy Shaver. Continuing across 38th Street was Sloan’s with its exciting room vignettes. “House and Gardens” had failed to prepare me for the handsome antiques and exciting accessories. Moving down the avenue, one reached Best, the children’s store, and McCuchen’s, the fine fabrics linens store. Russek’s was to suits, what Tailored Woman was to coats. Across the street and filling an entire block stood the venerable B. Altman where the profits went to New York City charities. The first floor, with its extremely wide aisles and handsome rich wooden display cases, was designed to accommodate the “carriage trade”. In B. Altman’s early days, the downtown customers had to shop from their carriages during the winter months, because the streets were unpaved and walking into the store was prohibitive.

Only two fine fashion stores have survived—Bergdorf Goodman and Saks. Lord & Taylor remains in name only. The May Company lacks experience in operating a fine store. Bloomingdale’s is far removed from the pacesetting days of Marvin Traud, under whom the Home Store vignettes attracted unprecedented crowds. Minus the handsome fabrics and superb tailoring, Bloomingdale’s clothes are now more trendy than fashionable.

Often I regret that I gave most of my designer clothes to the North Carolina History Museum for I am still the same size. After shopping for hours, I usually come home and appreciate a Gloria Sachs, a Bill Blass, or an Ellen Tracy more than when it was purchased. With fabric the first component of any garment, there is little hope for improvement in what’s being offered in fashion today.

Click here to buy: Dear Emily: My Life in the Fine Stores

The Illusion of Sincerity