Girls are disappearing from Standard High while the local sex trade flourishes. Their absences are barely noticed in the worst school in Arbor City, CA, where turnover and truancy are facts of life. Kendra Desola, the only faculty member likely to care, is on a leave of absence.

After a student’s lifeless body turns up in a seedy part of town, an immigrant community leader contacts Kendra. What does she know about her missing students’ activities, their families’ illegal status? 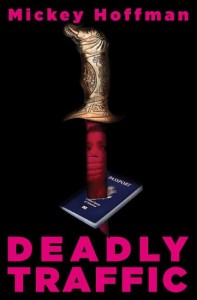 Searching for the missing girls, Kendra enters a dark world where passports and flesh are currency. When a second murder puts her in the police spotlight, she is unaware a trap is about to close around her.

Excerpt:
Sandi found Win leaning on the bar counter, waiting for her when she came out of the Ladies’ room. A greenish glow from the wine bottles above the bar accented the planes of his handsome face. The young bartender smiled as she returned his change. A hostess led a party of three toward a table along the wall. He frowned at the receipt in his hand and stored it in his wallet. She couldn’t see him turning it in to his boss; since when did petty criminals ask for meal allowances? More likely, it would be kept to demonstrate how well he treated her, right after he told her she didn’t deserve dinner at such an expensive restaurant.

He plucked a toothpick from a shot glass near the cash register and used it like a wand to direct her toward the door. Sandi winced as a punishing blast of hot air struck her face, giving a longing look back at the cool interior of the restaurant. Win slid a stiffened palm to the small of her back to make sure they stayed hip to hip as he chose a pace that suited his long legs.

As they walked, Sandi kept her eyes fixed straight ahead, on a distant point that existed only in her mind, so she could pretend not to see the shock on people’s faces when their eyes landed on her, the ungainly girl at his side. He, as usual, basked in the attention he drew from passersby. Impervious to the heat, he wore all black, chosen, she knew, to complement his hair and highlight the three diamond studs that sparkled in his left ear. A manicurist, outside for a smoke, paused mid-puff and stared in admiration, as if Sandi’s companion had stepped straight off the glossy cover of one of the People magazines in her salon. Sandi wished she could hold that fantasy cover in her hands and shred him to bits, starting with his complacent smile. Why didn’t anyone ever see him for what he really was?

Mickey Hoffman was born in Chicago, and attended public schools where she acquired the strong suspicion that some of her teachers might be human. She wasn’t able to prove this fanciful thinking until much later, when she became a high school teacher herself.

Before landing in the halls of academia, she worked in a variety of jobs, including computer typesetting and wholesale frozen fish sales.

The author is also a printmaker and painter and resides on the West Coast with her long suffering mate, eight marine aquariums and a very large cat. Mickey is also the author of School of Lies, the first Kendra Desola mystery.