As Alder crested the hill by Ice River, he caught sight of Willow, sitting on a log amongst the reeds.  The strawberry-blonde was fishing, and singing to herself.  She had a sweet voice, but not very powerful, and was too shy to sing in front of others.  It was accidentally coming upon Willow one day, carelessly trilling away with the mistaken impression that she was all alone, that had first captured Alder’s attention.

Of course, he was also drawn to the fact that Willow had a sylph-like quality to her, unlike her little troll of a friend, Clover.  The taller slender girl was warm, receptive and brimming with positive energy, also nothing like the cranky little she-bear she spent the majority of her time with.  He had chastised Clover for leaving Willow alone, and while he was serious about worrying over the blond girl’s safety, he was pleased at having the opportunity to spend some time with Willow without Clover present.  He had been working at winning the sweet girl over to his point of view, and he believed that he was succeeding, slowly but surely.

He considered approaching her, but decided that he wanted to wait and just watch her for a little while.  Observing the girl brought the kind of thoughts to Alder that were supposed to be reserved for adults.  It was the only rule he had seriously considered breaking, his own instinct winning over his logic.  He had already convinced himself that Willow would be his mate someday, so it didn’t really matter if they chose to break that rule.  She would be the perfect chieftain’s mate, loving and supportive, yet still wielding a will of her own.  With less than a week to the Rites of Passage, perhaps he could convince her to surrender to this notion too.

Alder gazed upon her for a few moments longer, not wanting to disturb her obvious reverie.  She seemed pleasantly lost in thought, casually bobbing her line in the river and dangling her toes in its cold water.  That’s when Alder caught sight of some movement on the far bank.  The person who crept there, well camouflaged in greens and browns, could not be seen by Willow, completely hidden by the tall reeds.  But from his perspective, perched near the top of the hill, Alder could see the black haired man easily.  He thought for a moment that his heart would stop beating.  He recognized all too well the tattoos that marked the prowler as one of the Black Talon Tribe.  The man began to stand, so he could see over the top of the reeds well enough to aim his blowpipe at Willow.  Without another moment’s hesitation, Alder threw himself down the hill.

Willow turned to look at him and smiled, having heard him call out her name, but not capturing his warning – his words had been drowned out by the noisy burbling of the river at her feet.  As Alder saw the Black Talon lift the solid reed to his lips and blow, he leapt for Willow, dislodging her from the log she sat upon and knocking her into the cold river, splashing violently in after her.  Fortunately for the startled girl, he managed to push her out of the way just in time to save her from the drug-coated projectile that had been hurtling towards her exposed throat.  The Black Talons rarely killed anyone but the warriors, the hunters, the elderly or the very young.  They preferred to take all others prisoner, as their tribe was a society that functioned through the use of slaves.  Alder could just imagine what that man would have wanted Willow for, and the thought of it made him shudder.

Leaving a shivering, sputtering Willow standing waist deep in the spring waters of the Ice River, Alder waded his way to the far bank as quickly as he could manage, and grabbed a handful of marsh grasses in order to pull himself up onto the shore.  Forcing himself to shake off the numbness in his limbs, caused by the chilling cold, the young man bolted in the direction where he had last seen the Black Talon man, pulling out his bone knife as he ran.  While Alder was grateful that he had managed to reach his tribes-mate in time, he was furious that the Black Talon man had dared tread into their territory to begin with.  As far as Alder was concerned, the intruder should pay for that error with his life.

The Black Talon man had already begun running for the woods when Alder arrived at the spot where he had last seen him.  The attacker had left a trail of broken reeds where he had passed, so it was not difficult for Alder to follow, gaining distance on the man as he sprinted after him with great leaping strides.  By the time the Black Talon man had reached the edge of the woods, the Snowy Barrens youth was upon him.  Alder tackled the invader and they fell to the ground, the youth stabbing wildly at the man with his knife.  Before the Black Talon man had abandoned his blowpipe and reached for his own knife, Alder had succeeded in stabbing him three times, once at the base of his ribs, once in the hip and a grazing blow to his thigh.  Finally bringing forth his own weapon, the intruder reciprocated, with a deeper blow to Alder’s leg.

The youth recoiled from the pain.  His hands slick with the Black Talon man’s blood, Alder lost his grip on his opponent, who seized his opportunity to make his escape, staggering away into the forest while holding onto his injured side.  Alder tried to follow, but realized the damage done to his leg would make pursuit difficult.

With a sigh, the Snowy Barrens youth lay back on the forest floor for a few moments, gathering his wits and restoring his calm.  His leg was bleeding profusely, the cut quite deep.  Sitting himself up, Alder sliced strips of leather from his tunic to bind the wound and then struggled to his feet.  Hobbling back towards the river, and Willow, he cursed his situation.  Less than a week left before the Rites of Passage, and he had managed to handicap himself.  Even with a shaman’s ministrations, he would still be hampered slightly by the injury at the end of the week.  Perhaps Clover had a shot of winning the Great Hunter Challenge after all.

He limped up to the riverbank and saw that Willow had pulled herself out of the water on the far side.  Gritting his teeth against the cold and potential sting of his open wound, Alder lowered himself into the water and waded over to check on the shivering girl.  He had trouble lifting himself out of the water again when he reached the other side, his leg throbbing in response to its exposure to the chill.  After a few tries, with his arms trembling from the effort, he finally made it onto the reedy and muddy flat surface. Willow then noticed that he was there.

“Why did you push me?” she asked sadly, before she realized that his arms, tunic and leggings were spattered with blood.  Her blue-grey eyes widened and she covered her mouth with her hands in order to stifle a scream.

“It’s alright,” Alder said, trying to reassure her.  “Most of the blood isn’t mine.  It was a Black Talon.  I tried to stop him, and I stabbed him several times, but he cut my leg and then made a break for it.  He got away.  I’m sorry.  I’ll get one of the shamans to tend to the wound, and then I’ll come back and track him down.  He won’t get far.  I should be able to catch up to him.”  He put his arm around Willow, as much to keep himself warm in his drenched clothing as to comfort her.  She clung to him in response, until she noticed the makeshift bandage on his leg.

“Oh,” she gasped, pulling the shorn strips aside.  “It’s deep.  It could get infected.  You can’t go after him like this.  Besides, by the time you find him, he may be back in Black Talon territory, and then you would have to deal with his friends.  You have to promise me you’ll let this go.  Go see to your injury, and then rest to make sure that you are well enough to complete the Rites in a few days.  You shouldn’t have put yourself at risk like that.”

Alder grinned and pulled her close.  “It was worth the risk.  It was for you.  And I promise that I’ll let this go, if you promise you’ll meet me in Firefly Glade tomorrow night.  It is only a few days before we’re adults.  Nobody will be the wiser.  You’ve refused me before now.  Haven’t I proven myself to you today?”

Willow looked at him mournfully.  “You aren’t being fair.  That would be breaking the rules.  You shouldn’t be extorting me like this, Alder.  One more week, and I’ll be perfectly willing.  That much I will promise.”

“Suit yourself,” he said with a shrug, struggling to his feet.  “I may not be able to run when Ermine has seen to my leg, but I’ll be able to walk well enough to track him.  My leg will likely still be stiff when the time comes for the Rites, whether I do this or not.  It’s better for the whole tribe if I seek him out and finish him off, not just for me and you.  The fewer Black Talons in this world, the better.”

Willow slapped at his shin.  “You’ve done enough.  I’m sure he won’t return.  From the amount of his blood on you, I doubt he will make it back to his tribe. 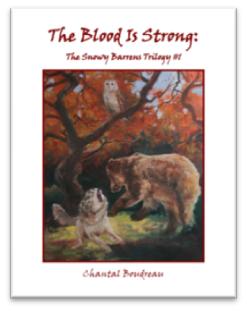 Alder offered her a hand up.  “Perhaps you are right, but if you really want me to leave off on the chase, you know my conditions.  There is only one thing that I want more than to see that Black Talon dead.”

Willow stood and gazed at him, silent for a few minutes.  “Okay,” she eventually agreed.  “You’ll get your way, Alder.  But no one will know of this other than me and you.  Do you understand?”

Alder gave her a cheeky smile and a nod.  “Anything you want, my mate-to-be.  Anything at all.”

As the slender girl helped the youth walk back to their village, there was a spring in his step despite his limp.  Inwardly he was cheering over his win, and he had returned to thinking he would beat Clover at the Rites, no matter how grievous the injury.  It would seem Alder would always get what he wanted.

Catch the rest of the story beginning with The Blood is Strong: The Snowy Barrens Trilogy #1

Alan Place May 7, 2012 0
Two Minutes to Sell Whether selling hardback/paperback or ebook we have only a short time to get that sale. This…
Book Review