Skriker pushed his Harley into the overgrown school yard and rolled the big bike under some sagging trees. His heavy boots crunched over squashed tin cans and he kicked glass bottles aside. He stashed his bike alongside the crumbling moss-coated brick wall of the school, beneath the low-hanging branches. He stopped short and just stared.

There was another motorbike stashed there. Beneath the thick copse of trees, gleaming in the scant moonlight breaking through the dark heavy branches; the bike was a Ducati, a stripped-down Eurotrash masterpiece that looked like a bird of prey on wheels. It was as cherry as a virgin maid on prom night, and Skriker found himself almost drooling as he eyed the gorgeous machine.

Someone was already here. Someone with exceptionally good taste. 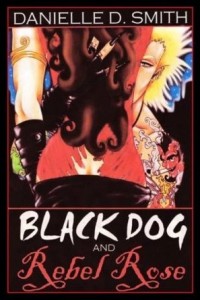 “Sorry, Betty,” he murmured, stroking the Harley’s hulking gas tank again, as was his habit. “Not tryin’ to make you jealous, or anything, baby. She’s mighty pretty though, don’t you think?”

He rolled the big bike up next to the Ducati. “A Monster,” he breathed, “God bless us everyone,” and slammed the kickstand down. He went about emptying out the saddlebags preparing for the hunt; he strapped two broad-bladed knives, one of iron, the other of serrated silver, to his belt. He untied his shotgun, freshly loaded with sterling slugs, and holstered it across his back. He laced a small black leather bullet pouch to his belt, filled with extra slugs and thick chunks of kosher rock salt; poison to purebred demons and irritating to angry ghosts. He planned for vampyres, but you never knew what might pop up; better safe than sorry.

“Preparation is the key, baby,” he told the Harley as he dropped the flap on the saddlebag and shouldered a small camo-green shoulder pack containing a canteen of water, a big cluster of candy bars, red licorice whips, and a bag of sugared corn nuts. His half-demon belly had a tendency to rumble quite a bit, and it was usually for the sweet shit.

“Snack-y, snack-y, keeps me happ-y,” he sang softly to himself, his voice smoker-rough but pleasant in the night. He blew a kiss to his Harley and tramped off through the overgrown schoolyard, following the light of the moon.

The crumbling front doors of the school creaked loudly in the night, a high-pitched squeal that resembled a desperately dying animal. Skriker stepped through the doorway and into a long wide central hallway. He sniffed the air as the door creaked shut behind him, and he could smell the vampyres here, scuttling around somewhere in this colossal brick skeleton. He unshouldered his shotgun and pulled his flashlight from his pack, flicking it on and banishing the cloth-thick shadows with its brilliant spear of white light.

The white walls were peeling in long yellowing strips, revealing an older ugly mint green paintjob beneath that. The old dirty linoleum floors were littered with rubbish; papers, ancient bottles, beer cans, a used condom or two, and old textbooks with half-rotted covers. Skriker briefly squatted down and plucked up a ratty moldering tome, brushing a fingerless gloved hand across the half-shredded cover. A section of the cover was destroyed by mold; ATH it still read in fat yellow letters where the rot had not eaten into the cardboard. Further exploration revealed pages of long division and basic algebra. One page was scrawled with MRS. TAYLOR SUX MY COCK in sloppy boyish handwriting. Skriker chuckled and dropped the forgotten text back onto the floor.

“Was always good at math, myself,” he quipped to the empty hallway as he rose and began to stroll further into the decrepit school.

He passed by rows of rusted out empty lockers and paused briefly to look into one. He examined with interest the ancient piece of moldy pizza lying pathetically inside. A fat brown rat skittered across his path, squeaking. It paused briefly in the center of the hallway and sat back on its haunches, looking up at him with small beady black eyes. Skriker stuck his tongue out at it. Its whiskers twitched once, twice, before it sauntered off on its way again, apparently unimpressed.

After passing the abandoned principal and nurse’s offices, Skriker came to a staircase at the end of the hall, peeling and filthy but still stable. He stuck his LED flashlight between his teeth and aimed his gun with the other, his eagle eyes picking out the twitch of every shadow as the electric torch light bobbed ahead of him.

The second floor of the school housed more classrooms, one after the other. Boy and girl’s bathrooms, each empty and moldering. He perused each lavatory, kicking the stall doors open, finding nothing save for grime coated toilets and more rubbish on the filthy tiled floors. He stood briefly in the girl’s room, staring at himself in the long mirror above the soiled sinks.

“You fuckers hid yourselves well,” he muttered, and that’s when he heard it; a high-pitched squealing, the sure sound of a small animal being attacked.

Skriker bolted from the bathroom and out into the hall, his boots pounding on the floors. He tore around the corner, flashing his torch in the direction of the sound.

Three Bloods were squatted in the middle of the hall about ten feet away. One of them had caught a rat and they were scrabbling over it, their fangs bared, hissing and spitting at each other, their claws tearing the hapless creature to gory pieces. One of them had locked its fangs into the rat’s hairy belly and was sucking greedily at the blood and juices oozing from within, grunting with pleasure. All three of the vampyres looked up jerkily as Skriker swung into the hall to face them, his flashlight and shotgun raised.

The trio screeched and he didn’t hesitate to send the one clutching the dead rat into oblivion. The shotgun blast tore a massive hole into its neck, nearly severing its head from its shoulders. It flew backwards, blood spattering the walls and trash-strewn floor. The body skidded down the hall and slammed into the half open door of an empty classroom with a meaty thwack!

The two remaining Bloods screeched, hissing snottily, their needle-toothed maws slicked with vermin blood and their maligned yellow eyes rolling. One of them chucked a chunk of rat meat at him like a child having a tantrum. He blew the grotesque missile to bits in midair, spraying gore across a row of lockers nearby. Skriker grinned mercilessly and took aim at the vampyre that had thrown the dead thing at him, blowing its head off with another monstrous shotgun blast as it went scuttling up a nearby wall. The body spilled down from the wall and crashed to the floor, a rumpled twisted mess.

The last Blood took the hint and turned to flee, rushing down the hallway. Skriker chuckled and cried out delightfully, “Run, Forrest, run!”

He strolled down the hallway, enjoying a leisurely chase, and only broke into a run when the Blood neared the end of the hall and scrambled up a staircase.

Skriker sprang up the staircase after his quarry, jumping up two steps at a time. He howled like a joyful wolf as he darted up to the third floor of the old school.

The last Blood was mewling and whining, terrified; a dark red stain spread across its already filthy trousers as the thing pissed itself in sheer terror. He saw it scramble around a corner and into another hallway. Skriker howled again, cackling, and ripped around the corner, and that was when destiny collided with him.

As Skriker barreled around the corner he slammed full force into a young woman. They were both knocked to the floor; Skriker huffed as he landed on his ass, his shotgun clattering to the hard linoleum. The girl flew back and tumbled to the floor with a grunt; the Glock she had been holding flew from her grasp and hit the nearby wall. Both of them scrambled for their weapons and simultaneously jerked upright, aiming at one another with deadly precision. The Blood that he had been pursuing rushed off down the hallway, screeching and cackling as it narrowly escaped.

Skriker got his first good look at the girl sitting before him, and his heart just about jumped into his throat.

She sat there, only a few feet from him, staring him down with a fierce malice. She was, without a doubt, the most beautiful woman he had ever seen in his life. Even from this position he could see that she was very tall and had a body that just about knocked him out. Her hair was dark and wild, flowing in lush curls and waves to the small of her back in a heavy exotic drape. The eyes that stared him down from under dark perfectly-arched brows were breathtaking; two opposing colors, the right a deep jewel blue like a bright sapphire, the left dark brown and penetrating, almost bottomless. Beneath her eyes, traversing diagonally down each of her finely molded cheeks, was a trio of thin, livid pink scars that cut from temple to chin; Skriker found these scars stunningly sexy on such a beautiful face, making her appear wilder, stronger, and fiercer.

There was something about her that went beyond the physical, a shimmering aura that briefly tinted her skin, eyes, and wild curling hair with an alluring mystical light and then was gone. The demon in him, for a reason he could not yet define, felt a twitching rustle of fear.

The young woman was breathing heavily, her nostrils flaring and her lush lips trembling. The scars on her cheeks gleamed faintly.

“Who are you?” she hissed. Her voice rattled off the walls around them. Skriker leaned forward, his lips twisting into a playful smirk.

She spat in his direction, showing beautiful teeth like mother-of-pearl. She climbed to her feet and stood over him, still aiming her weapon, her arm sturdy, as unflinching as cut glass. She drew to her full height and he could not help but gawk at her; she was pure curvaceous muscle, long, lean, and visibly mean. She wore black leather pants that molded to her legs and high shapely ass like a second skin. Knee-high combat boots stained with dirt, old blood and oil. Wrist-to-elbow vambraces made of thick tooled motorcycle leather. A sleeveless body-hugging jerkin made of soft black suede. Her tightly laced torso and full breasts were amazing. Skriker felt a very inconvenient stirring in his loins, like feathers whispering over his junk.

The young woman backed slowly away from him, her gun still aimed with deadly precision.

“Don’t fucking follow me,” she snarled, and then she was gone like a shadow, running past him and down the opposite hallway.

Skriker sat there for a moment, dazed. He slowly lowered his rifle and blinked, wondering if he had just imagined her, if she had been some incredible vision produced by his raging libido. He exhaled tremblingly, licking his lips.

After a moment he had jumped to his feet and run on, hot on her trail, his footfalls echoing through the dark hollow corridors of the long-abandoned school.

Review: Your Blog, Your Business