Blood, lust and bloodlust collide when the police hunt for a vampiric attacker threatens to uncover the dark secrets of one that they call their own…

Chapter 1
I am haunted by the ghosts of childhood memories, by the cruel promise of eternal sunshine and an innocence which should have endured, that died in increments and took my only two friends with it. 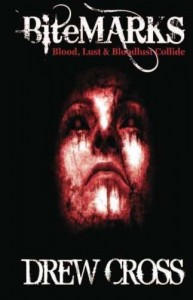 They are relics from a time when darkness and pain were unfamiliar strangers, as fleeting in their attentions as the slow summer midges which could be outrun with a sudden burst of speed. Now they crush me with the knowledge that they contain, taunting me with snapshots of my past and whispering, intoxicated by the vicious belief that one day they can reclaim me.

We cannot change our pasts, cannot take back the evils, small or large, that we have visited upon others, but we can choose not to be defined by our previous actions and so that is what I try to do each day. I try not to think about the past, as if this could somehow make it cease to have existed, striving not to visit my memories often, although they often choose to visit me; shadows in the corners of my thoughts which I push away without acknowledgment, afraid that they might break down the mask that I wear to face the world each day.

The creature that I seek is haunted too. I can feel the twin snakes of rage and pain in his thoughts now and hear the metronymic beat in the chasm where his heart should be. I would have left him alone, even with the knowledge that looking into his eyes might tell me more about the nature of what I am, but the pebble that he dropped into the calm surface of my world threatens to disturb things in the sediment that I have spent my short life concealing. There are things with teeth down there in my dark places, things that I must feed with my secret arcane practices. They are never sated, screaming with wordless voices and waiting to consume me and those around me if I let them.

Chapter 2
The girl draws in a sharp breath through clenched teeth and moans with a mixture of pain and pleasure; her white-blond hair feels like falling snowflakes where it brushes my skin. She has a tattoo on her neck, two small red pin-pricks and the words BITE ME in Gothic lettering, stark against her near translucent paleness. A thin rivulet of blood snakes down her bare back, an escapee from the small clean incision on her shoulder blade.

I kiss her deeply, my mouth still wet with her blood, holding her close and feeling her tremble, wanting to consume her, she runs her tongue over my elongated fangs as if she can read my thoughts. I can taste peppermint and vodka, the blood as a sweet honey tang underneath, her skin is aromatic with cocoa butter and the soft smoky musk of burning incense clings to her hair.

We are not alone, although we can pretend to be, shrouded by the semi-darkness and our own intense intimacy. We are in an upstairs room above the Old Angel, the bar locked to the general public, or at least to the usual motley gang of rockers, Goths and students that usually gather here for the cheap drink and live music. This is a regular private meeting of ‘vampires’ and willing ‘donors’, a closed door invitation only event run by the Vampire Society.

The society is forced to exist in different forms, outwardly it is an appreciation club for role-players and fans of the old Hammer horror films, a tongue-in-cheek nod to all things Dracula in order to avoid the attentions of the intolerant. The other face is as a place to belong for like-minded people who choose to live the lifestyle in a more literal way. Everything that takes place here is governed by rules, the key ones being consent and safety. The fangs are veneers, purely for show not for biting, and whilst blood is consumed it is taken by syringe or by cuts in safe areas inflicted by sterile blades.

“Thank you.”
The girl, breathless, pulls her black t-shirt back over her head, suddenly shy after this swapping of fluids with a stranger. She is young and this is the first time I have seen her, and therefore probably the first time she has experienced this new array of sensations.

“No, thank you .”
I lean in using a hand to hold her soft hair out of the way and kissing her gently on the lips, eyes open to meet her own.

“I’d like to see you here again sometime. Of course there are plenty of other guys and girls for you to meet here too though … ”

She smiles coquettishly. Leaning closer she kisses me again with lingering enthusiasm.
“Funny, I didn’t notice any of them.”

“Marks?”
“Sir?”
“Briefing’s in five minutes with CID, if that‟s enough time for you to finish preening yourself?”
The Inspector strides off without further pleasantries, but I can’t help but like the grumpy old sod anyway.
Marcus Cooke emerges still dripping from the shower, hurriedly toweling himself down and putting on his shirt having heard the Inspector’s words.

“Why can‟t you put some pants on before your shirt? I don’t want to see your dick every day.”
“Seeing my dick is the highlight of your day and you know it.”
He grins in his usual stupid broad fashion and slaps me on the backside as he passes to get to his locker.
Marcus is, like me, a probationer police constable, fresh out of training school at Ryton-on-Dunsmore and getting to grips with the day to day realities of trying to establish and maintain order on the mean streets of Nottingham. He has mixed ethnicity, but refers to himself as black, muscular, with dark curly hair and a quick and easy wit; a couple of years older than my twenty two.

At only five feet four inches tall, and unapologetically gay; the traditionalists love him. He is by his own admission, too short, too black, too gay and too loud for the force; like an erection in church mate he says and winks, and like an erection he enjoys the friction.

“Hey, Spooky and Homo, briefing’s starting.”
The sneered taunt comes from a passing Paul Strang, an experienced but lazy beat cop who harbors an instinctive dislike of the pair of us. We grab our kit belts in unison and head for the briefing room.

“Shall I punch his fat head or do you want first shot mate?”
Marcus grins again as he finishes the sentence.

“Let me decide whether I want to keep this job first,” I say, stepping through the doorway into the briefing room.

“Thanks for joining us, gentlemen, take a seat.”
We do as we’re told; when Detective Inspector Karen Cobb gives you an instruction you follow it expediently. She allows us to sit before continuing.

“Okay, most of you aren’t stupid, well at least some of you, so you’ll have realized that this is not a routine briefing. It goes without saying that you keep the details of this to yourselves, and that CID will be handling any subsequent investigation; so in the unlikely event that any of you turn up something of interest, you‟ll let me know without delay.”

She pauses allowing Detective Sergeant Kevin Henshall to outline the details.
“Right, what we have so far is a serious assault on an Elaine Morris at around about one last Saturday morning on Magdala Road. Some of you will know Elaine, since she’s well recorded for a variety of soliciting offenses, which is of course what she was doing in Mapperley Park in the early hours in the first place.”

There is a low ripple of conversation from parts of the room.
“No, this isn’t the kind of assault that you‟re thinking ladies and gents. There was no attempt at sexual activity and we can virtually rule out her pimp too, seeing as how his appearance apparently stopped the attack.”

Paul Strang speaks up.
“She probably ripped off a punter; getting attacked is an occupational hazard for tarts.”
“Possibly.”

DS Henshall flips over the page of a large flip-chart, displaying three blown up colour photographs pinned to it. The woman’s face and neck has multiple deep puncture wounds, and blood seeps from these gashes and from eyelids which are swollen shut. She looks like the victim of a nasty glassing, the bits that aren’t bloody are swollen and discolored; and the horrors continue with shots of her scratched and punctured hands and forearms.

“No with his teeth and nails. He just walked up and attacked her, no attempt at conversation, then calmly strolled away. That’s why we’re briefing you today; he stopped because he was disturbed not because he was finished. Our other problem is that courtesy of Messrs. Bennett and Jones, Elaine has retracted her brief initial statement and gone to ground, which probably means that they’re planning on dealing with this situation in their own inimitable style. We’re all aware of what happens when those two cretins decide to get something done, and we don’t want chopped up punters left right and center fucking up our statistics.”

Detective Inspector Cobb steps back in to have the final word.
“No statement means no crime and no official investigation for the time being, but one other thing you should be aware of is that this nut was described as having long sharp teeth and claw-like nails. Before she stopped talking Elaine described him as a vampire. Personally, I don’t believe in vampires, but I do believe that we have a sick bastard out there who’s not going to stop at ripping up one, and now our friendly neighborhood gangsters are going vigilante which gives us problems. That’s enough excitement for you boys and girls for one day, now get out there and get on with what you’re paid for. Oh, and if you see anyone with big teeth wearing a long black coat, hold a crucifix near him and let us know.”