Awaken the Highland Warrior: It was gone. – Bree searched the floor, behind the boxes, in the boxes, but the Book of Battles was missing. He must have taken it. A thump sounded outside the window, and she jumped.

Dead limbs were always falling from the old oak, but after finding Faelan, Bree didn’t chalk anything up to normal. She went to the small window, clouded with age, and lifted the hem of her pajama top to clear a circle. The full moon was surrounded by clouds, throwing shadows on the chapel and graveyard. 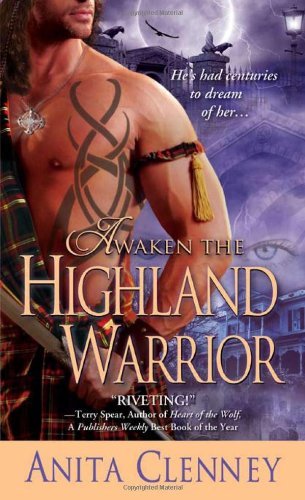 Trees began to look like skeletons and the chapel windows like empty sockets in a skull. The window facing her darkened as if something stood there. It wasn’t Faelan. She’d heard him snoring softly as she crept past his door. The shadow shifted again, and two yellow spots materialized, then vanished and reappeared in the blink of an eye.

She was halfway to Faelan’s room before she realized she’d turned to him for protection when he could very well be the threat. His door was still ajar. Invitation or chivalry? She stepped inside. He lay on his back, one arm flung over his head, the edge of a towel covering his groin. He wasn’t wearing the sleeping pants she’d bought. He wasn’t wearing anything, from what she could tell.

His face was relaxed. Dark hair fell across his forehead, spilling over his outstretched arm, blending with the fine hair dusting his armpit. Her soul ached, and for a second, she didn’t care what he was or where he’d hidden the book. Then her sanity returned. She had to know which side he was on. The book must be here somewhere. She’d hidden her treasures under the loose floorboard when she was a child. Had he found her hiding place?

She tapped her foot softly until she heard the squeak and then removed the plank. A glint of metal shone in the dark. She pulled out a necklace, a tarnished silver cross. Her dad’s. Her grandmother had given it to her the night he died, the night she told Bree the story of warriors and demons to distract her from her grief and keep the nightmares away. Before they left for the funeral, her grandmother had asked for the necklace back. It was valuable, she’d said. She shouldn’t have given it to Bree yet. Bree knew it was valuable. It kept the nightmares away like her grandmother said it would, so Bree hid it under the floor and said she’d lost it. That was the only time in her life she’d lied to her grandmother. The necklace had lain there in the dark for nearly two decades. How could she have forgotten hiding it here?

Caught up in her thoughts, she didn’t hear the noise until too late. Faelan stood next to the bed wearing nothing but his talisman and tattoos, his face set like the Grim Reaper. Bree jumped to her feet, heart racing, the necklace clenched in her hand.

“What are you doing?” he said, advancing on her.

She backed away. “I’m…my…the…” A kind of serenity enveloped her, in the middle of her guest room, facing the most frightening, most naked man she’d ever seen, a man who should be dead, who might have murdered someone behind her house, and who could even be a demon. She stiffened her shoulders, straightened her spine, and gave him her meanest glare. She was sick of it. Sick of the lies, the secrecy, the pretense. On both sides. If he was a demon, she’d rather fight him now.

“You know damn well I’m looking for the Book of Battles, and I hope to God you have it, because otherwise, it’s disappeared.”

Bree put her hands on her hips. “Why did you steal it?”

“Steal it?” His face went from menacing to incredulous. “Steal it? Ye daft woman.” The brogue was thicker now and loud enough to wake the dead. “You’re the one who stole it!”

“Me? My grandmother had this book when I was a child.” Had he lost his mind, along with his pajamas? She waved her hand at his groin. “If you can’t keep that thing down, put on some clothes.”

He grabbed his jeans from the floor and jammed muscular legs into them, then jerked a shirt over his head. “Tell. Me. Now,” he said, forming each word loud and harsh, “how you have my clan’s Book of Battles and what you did with the missing pages.”

“I told you, it belonged to my grandma, and I didn’t take the pages. I found it that way.”

“The book belongs to the Connor clan.”

“Well, I guess they lost it. Like you’ve lost your amnesia.”

Faelan’s jaw clenched, his fists clenched, she bet even his butt clenched. She was sure if she wasn’t a woman, he would’ve hit her. And she sure as heck would’ve hit him back.

“It wasn’t lost. It was stolen.” His lips thinned and his eyes blazed. “And now it ends up in your house. While you’re at it, explain who this is.” He jerked open the drawer next to his bed with enough force to turn it into toothpicks and thrust a sticky picture in her face.

“What did you do to my picture?”

“It’s not me, you arrogant dolt. It’s Isabel. My great-great-grandmother.”

He didn’t say anything, just stood there, glowering at her.

“I’ve fed you, clothed you, given you a bed, and you’re pretending you can’t remember who you are or where you came from, while I’m agonizing over whether I’ve rescued a warrior or a demon.” She balled her fists, digging the cross into her palm, and she wished she could punch him in the face. “I was starting to think you were a warrior, but now I’m not so sure.”

“How do you know about warriors?” he asked, his voice accusing.

“Grandma told me the story when I was a girl. I thought it was just make-believe.”

“Your grandmother?” He looked puzzled, but some of the anger left his face.

“I didn’t even remember the story until after I found you, then I discovered the book in the attic while you slept.” Bree didn’t mention the bizarre dream and her grandmother telling her to find the book, to help him, or how she’d smelled her grandmother’s lavender perfume when she woke. “The book’s amazing, and that last page, did you notice it’s in another language or some kind of code? I could make out only a word or two, but I’d give my entire Civil War collection to know what it says,” she said, forgetting for the moment how disgusted she was with him. “There are even dates of battles from the future.”

He stared at her like she’d channeled Satan. “You read the book?”

He scrubbed his hands over his faintly bearded chin. “This must be a test.”

“A test? What are you talking about?”

“None of this makes sense. How you found me. How your grandmother got my clan’s book, a book so sacred no one but the Keeper is allowed to read it.”

“You have a Keeper. Wait…you mean you haven’t read the book? Are you kidding?” He didn’t look like he was kidding. “I have no idea how Grandma got it. I saw her with it once. I thought it was her journal. That’s what I was searching for when I found Isabel’s. All the women in our family kept journals.” On her father’s side anyway.

Faelan looked from the picture to her and frowned. “I have to find out how she got it.”

“It matters. The book is life and death to our clan. ”

That explained why he was so uptight. “You can have it if you’ll drop the amnesia crap and tell me who you are and how you got inside the time vault.”

Faelan opened his mouth to speak, and the window behind him shattered. Before she could scream, Faelan had his arms around her and dove, flinging both of them onto the bed. His body covered hers, her head tucked safely against his chest, from accuser to protector in a second. He looked at the window, drew in a harsh breath, and lurched to his feet, pulling her with him. Bree heard an ungodly growl and glimpsed something tall and grey with yellow eyes as more pieces of the glass broke.

“Get to the attic. Now!” Faelan pushed her into the hall. “Lock the door and stay away from the windows.”

“Come with me,” she pleaded, gripping his arm.

His face looked like a relic carved from stone. He glanced back at the thing trying to get inside. “I can’t. Now go!”

USA Today best selling author Anita Clenney grew up an avid reader, devouring Nancy Drew and Hardy Boys books before moving on to mysteries and romance. After working as a secretary, a Realtor, teacher’s assistant, booking agent for Aztec Fire Dancers, and a brief stint in a pickle factory (picture Lucy and Ethel--lasted half a day)…she realized she'd missed the fork in the road that led to her destiny. Now she spends her days writing mysteries and paranormal romantic suspense about Secret Warriors, Ancient Evil and Destined Love. Anita lives in suburban Virginia, outside Washington DC, with her husband and two kids. You can learn more about her writing at www.anitaclenney.com