Do you know what horrors lie beyond these pages? Costa Calabrese has just uncovered the truth about his past. Some truths should never be revealed.

When you learn you’re the son of the world’s foremost and feared hunter of demons, life’s rules inevitably change. 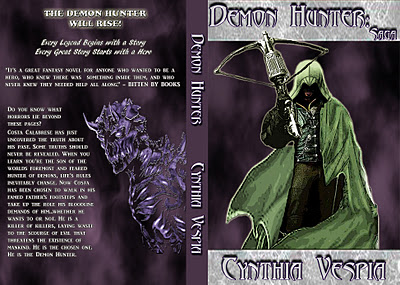 Now Costa has been chosen to walk in his famed father’s footsteps and take up the role his bloodline demands of him…whether he wants to or not. He is a killer of killers, laying waste to the scourge of evil that threatens the existence of mankind. He is the chosen one. He is the Demon Hunter.

Slowly, perhaps foolishly, I peeled back one of the heavy doors and peered inside. At first sight it looked as though it were a simple dinner party. Both men and women filled a long table drinking red wine and carrying on with laughter. As I looked again I found it to be a most disturbing vision.

‘Twas not wine that they drank but blood, tapped from the neck of a poor soul by some crude device that resembled a spout. He hung upside down and they drained him into their cups until he went pale.

I shuddered to think of such torture. These beings truly were soulless and they needed to be halted in their scavenging of human life. Looking out over the table all of them were merrily distracted in their gluttony. My eyes scanned each face seeking the one who would make the best target to start with as I silently loaded my crossbow.

I turned to motion behind me for Paralay and Talisa to arm themselves, thankful that I had led them in and they had not endured the shock of the sites I had seen. Most likely that display alone would’ve sent them running for the exit.

As I turned back to the vampire dinner party I felt my own urge to flee. Sitting in one of the cushioned back chairs, goblet of wine in hand, and staring directly towards me was Lord Lecarde.

He winked at me, drained the remainder in his goblet, and in a flash that hideous countenance was a breath away from my own face. He moved with lightning-like speed, tearing open the door he caught me by the cloak and pitched me inside the room.

I came up overhead and landed back first upon the dining table. The vampire lot made a unanimous hissing sound, abandoned their goblets to the ground, and came over me to feed on the new blood that hand been handed to them like a gift.

Luckily for me I was not alone in this quest. My companions came to my aide immediately, jumping into the fray and pulling the vampires off of me before any real damage could be inflicted.

With the pack off of me I tried to shake the senses back into my noggin. My head pounded. When my eyes focused once again I found that I was directly underneath the vampires hapless victim as he swung to and fro from the ceiling fixtures. They’d not time to cork the spout as his neck before the altercation had erupted so fresh blood dripped down and began pooling across my shirt and chest. It was warm and thick. This unnerved me to no end. I quickly shifted from the table top and found myself once again facing Lord Lecarde.

The turbulence behind me had not subdued but I could not pull myself away from my battle with Lecarde to see if my companions needed help. He was my one and only focus. We stayed squared off face-to-face and as I looked into his hideous eyes the memory of that day in Gryphant came flooding back over me. He’s escaped me once before, it would not happen twice.

I moved forward, he as well, but before we clashed I dove past him into a tumble. He whirled around with great speed but not fast enough to thwart me from my intent. I stopped just near my crossbow, the bolt still chambered and drew it up eye-level with Lecarde’s face.

Available through Amazon.com and BarnesandNoble.com

Cynthia Vespia, "The Original Cyn," has a background as a certified personal trainer; licensed private security guard; award winning video editor, and graphic designer. But the allure of writing has always remained her first love.
As a skilled wordsmith she established a successful career as a journalist and promotional writer. Throughout that time she remained true to her pursuit of writing novels, a passion she's held since she was a very young.
Her first novel, a medieval fiction entitled The Crescent was published in August 2005. The novel was unanimously praised as "an engaging, descriptive read" which prompted a sell-out at Borders Bookstore in less than one hour during the first official signing.
Death's Grand Design, a short, satirical look at the afterlife, was published online shortly thereafter and once again met with reviews that honored her attention to detail and the flow of her prose.
Cynthia followed with a new novel in Theater of Pain. With a touch of wit and cynical humor, this thriller unfolds within the eccentric world of professional wrestling where competitors would do anything to reach the top...even murder.
After a short hiatus, Cynthia returned with the Demon Hunter Series. The story about a nobody who becomes a somebody in the bloodiest of ways. Following the tradition of dark fantasy and combining the concept of high-adventure, Demon Hunter examines both the light and dark side of human nature when a man learns he is fated to hunt demons before they corrupt mankind. The success of Demon Hunter garnered it favorable reviews from respective personalities in the industry including a nomination for Best in Series by LRC Cafe and a win for Most Artistic Trailer from New Covey.
Cynthia returned to the contemporary side of thrillers, but still remained true to that special twist that her novels are fast becoming known for. Life, Death, and Back delves into the paranormal when a man's life is tragically cut short and he remains on Earth as a guardian angel to those he’s left behind.
Today Cynthia writes quality, character driven novels full of suspense as well as dark fantasy. With a plot pace to stir the adrenaline and keep the pages turning, Cynthia likes to refer to her novels as "Real life situations that you could find yourself in but hope to God you never do." In her spare time she enjoys reading, movies that involve a strong plot/characters, and keeping active through various forms of martial arts and as an active fitness competitor.