Chapter Two
Ken came down from the boat, his throat dry and fear slithered down his spine. The horizon stretched desolately away, no soul in sight. The smell was the first to get to him and his stomach turned—he leaned over retching; nothing came out.

Then the cough; dry, rasping and he felt totally hopeless. From a distance a man approached him. He stared for a while faintly trying to determine who the figure was then in shock, grimaced as he recognized it was his father.   He had not seen him for fifteen years. His father had aged terribly, the man looked almost skeletal. Father and son stared at each other with disinterest.

Ken wondered if his father had ever missed him, but then he shrugged the thought quickly off. He looked around trying to hide his disgust at this forsaken land. He had not been home in fifteen years. The constant fights now seemed ridiculous just like the man in front of him.

There were no formal greetings or expressions of pleasure at seeing each other; they simply went to the business at hand.

“You are the negotiator?” his father asked.

“I was the only one stupid enough to accept,” Ken replied.

The father pointed one skeletal finger in the general direction of the longhouse. “I am the welcoming party.”

“Could have done worse, I imagine. The idiots must have thought you had something to offer.” 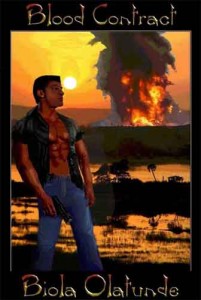 The old man moved off with surprising agility, quickly and silently.

Ken was caught unawares by the movement. “What’s the rush?” he panted, as he noticed with some shame that he was out of shape trying to keep up with the fast pace.

His father gave him one contemptuous look, but said nothing.

Ken felt like he had just been slapped and he grew angry that he still could be bothered by the opinions of his father. Bugger him, he angrily thought. Minutes later they were in the longhouse. It was the general meeting place of the village.

Smells, shouts, and smoke from many lit pipes assailed him as he stepped in.

Someone clamped a clammy hand on his shoulder; he turned to check who it was, just as he heard another yell greetings into his ear. The clammy hand was still on him, the fellow was drunk; he turned slowly, straight into the eyes of Torjor. He recognized him instantly. His stomach tightened in knots. The sense of disgust he always felt for Torjor came to the fore again.

His father watched the assault with a sardonic grin flitting across his emaciated face. He wandered to a seat at the far end of the longhouse, seeming to lose all interest in Ken’s presence.

“I thought they said they were sending us a man,” Torjor mocked.

Ken gave him a cool stare: the dead brown eyes, the scarred face from many knife fights, and then pointedly turned away. “I am the negotiator,” he said, gratified that his voice was cool.

Hours later, exhausted and weary, he stepped outside from the dim longhouse for some fresh air. Negotiating peace with angry, hungry people was not going to be easy. Ken knew that, because he understood the hunger, he understood the underlying bitterness that had driven people like Torjor to this kind of business. He had tried to be patient and allowed them to just talk, not offering anything, nor did he condemn. It was they who called for the meeting to adjourn till the next morning. No one offered him food or a place to rest. It was assumed that since he came from the village, he would be taken care of by his own family; after all, they had sent his father to welcome him. However his father had disappeared long before the meeting ended.

He was not expecting hospitality from his father. He just assumed he could sleep in the longhouse. The longhouse was usually a communal building meant for everyone’s use. Fireflies made little light points in the night. In the far distance, a voice was raised in song. There were the occasional calling sounds of a night bird. Ken assimilated all the sounds sitting out in the longhouse.

He was not sure if his father expected him. It was not done, though. When you have grown a beard and can make a woman pregnant, it is a disgrace to be seen in your father’s house. He swatted at the insects and closed his eyes. The boy who sneaked up to him, must have thought he was asleep as the rascal slid close to him, feeling his pocket, trying to slip his watch. He suppressed a chuckle and allowed a feigned snore to escape as he waited for the right moment to capture the thief. He felt sorry and angry at the same time. He suddenly held the boy’s hand in a vice grip.

The boy froze and straightened trying to free his hand; he was not frightened but embarrassed.

Ken opened his eyes and looked at the boy. “Your name?” he barked, brooking no nonsense.

Ken released the hand and gave the boy a long survey. “You could be dead in two minutes,” he said.

“And you in less,” an angry female voice answered out of the shadows.

He saw the woman and his mouth went dry but he said nothing. He instantly recognized her. He still remembered her name and murmured it to himself, “Ebijor.” It was a name he had lived with all the time he had been away. It was crazy, because he had thought of her, wondered if she had remained in the village or had fled like himself.

But all speculation was now cleared, as the still-beautiful lady stood angrily in front of him. His face was calm, slightly questioning, as he watched her angry face but his voice was heavy with sarcasm. “Still playing games I see Ebijor?”

She ignored him and delivered a loud slap to the boy, who took it with one sharp cry, tears coming to his eyes. The boy stared at both of them, and turned away.

Ebijor sighed, “Hope you did not lose anything to him?”

“That is not much then,” Ebijor said, and turned to go.

“The practicing robber is your son?”

Ebijor turned away. “I doubt you are interested in whose son the boy is; society decided who he would be.”

“You are the village sociologist as well? Very wise indeed,” Ken mocked.