A frantic man phones the Winnebago County Sheriff’s Department reporting his brother is armed with a large dagger and on his way there, intent to sacrifice himself. Sergeant Corinne Aleckson takes the call, learning the alarming reasons behind the young man’s death wish.

When the department investigates, they plunge into the alleged criminal activities of a hidden cult and the disturbing cover-up of an old closed-case shooting death. The cult members have everything to lose and will do whatever it takes to prevent the truth coming to light. But will they find An Altar by the River in time to save the young man? 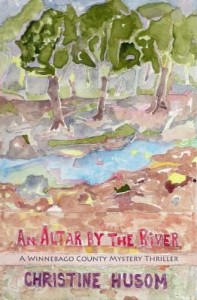 Chapter One
The laptop computer mounted next to the steering wheel in my squad car beeped, and a message appeared on the screen.

I was near the southeast border of the county driving past rolling acres plowed for planting in the upcoming weeks. I took a right onto the next road, a bumpy gravel leading into a small Finnish Lutheran cemetery at the rise of a hill. I stopped my car, flanked on both sides by headstones adorned with names full of double vowels and consonants.

It was an unfamiliar area code. I punched in the ten digits. It barely rang when a panicked “Hello?” spoke from the other end.

“Sergeant Corinne Aleckson, Winnebago County Sheriff’s Department. I had a message to call–”

“It’s my brother. He’s on his way to Winnebago County to sacrifice himself on Satan’s altar.” His words tumbled out with urgency.

I pulled the memo pad from my breast pocket and tried to digest what he said. “Mr. Trippen, could you repeat that?”

“Jeff phoned me a few minutes ago to tell me. He even sent me a picture of the dagger he’s going to use to my cell phone. I tried to talk to him, find out where he is, but all he would say is he’s on his way to Winnebago County to sacrifice himself on Satan’s altar. I don’t know what to do.”

“Mr. Trippen, does that make any sense to you? Sacrifice himself on Satan’s altar? In Winnebago County? “Is your brother suffering from a mental illness?”

“Okay, let me get some information and we’ll take it from there. You said you don’t know where your brother is, but he’s on his way here, to Winnebago County. Where are you? I don’t recognize the 802 area code.”

“It’s Vermont, but I’m in upstate New York right now. I’m an over-the-road truck driver. Just dropped off a load, and was on my way home when Jeff called.”

“Okay. I’ll need your full name and date of birth to start the report.”

It was in Vermont. “And your commercial license was issued there?” I asked.

I sent a message to Winnebago County communications, requesting an out of state search on Trippen.

“But what about my brother?”

While Trippen continued, I typed in the vital statistics and sent a second message to communications. “He’s moved around a lot, landed in New York last year. He gets P.O. boxes so I can send him money, but I never really know where he’s staying. Poor Jeff went off the deep end years ago. I don’t know what else to do to help him except send him money. I never expected this.” His voice cracked.

Communications found Gregory Trippen at the address he gave, and as the holder of a commercial driver’s license. They found an identification-only license for Jeffrey Trippen, issued in Vermont two years prior.

“We grew up there, in Wellspring. My mother got us out of there when we were still kids, but it was too late for Jeff.”

“Our mother married a man when we were little, after our dad died. It turned out he was a hard core Satanist. When I got older, I started to believe that monster killed my dad so he could have my mom and her boys.”

One thing at a time.

Was Gregory Trippen a rational man? It was difficult to determine in a few minute phone conversation, packed with wild claims of what his brother was planning, their involvement with a cult, and that his stepfather likely killed his father to marry his mother, and gain control of her sons. “Mr. Trippen, we need to meet in person. When can you get to Oak Lea, to the sheriff’s department?”

Trippen’s voice was trembling and sounded like he was struggling to hold in his tears. “I hadn’t thought that far. I about lost it getting that call and seeing the picture of the dagger on top of it all. I did the only thing I could think of. Call you guys.”

His end of the phone went silent. “Mr. Trippen?”

“Yeah, I guess I’ll have to come to Winnebago County. I never wanted to go back there, but I gotta do all I can to save my brother. I’ll get this rig back. I’m four hours from home. I don’t like to fly. My brother won’t fly, so if I drive, hopefully I’ll still make it there before he does.”

“It’s a long drive from Vermont.”

“About thirteen hundred miles. Twenty hours, or so, in a car.”

“You’ll need to sleep before you start off on another long drive.”

“My friend is out of work. I’ll hire him to go with me and he can take the first leg.”

“What about your mother? Where is she?”

“In Vermont, but I don’t want to tell her about this yet. She feels she’s responsible for Jeff’s illness and worries all the time. I want to leave her out of it for now.”

“All right. I’ll give you my cell number so you can call me when you have an idea of when you’ll get here.”

“A few years ago when I thought they had finally given up on us, I phoned a lieutenant there to ask about my father’s case. He was one of the deputies who was involved with it.”

“What happened to your father, exactly?”

“He was deer hunting with three other guys, and they all said they mistook him for a deer. They all shot their shotguns, and two hit him. They didn’t know which two it was. All of them mistook him for a deer? I was hoping they’d reopen the case, but the lieutenant said the detective had determined that it was an accident.”

“Do you remember the lieutenant’s name?”

Alden Armstrong. A veteran of many years with the department.

“And your father’s name?”

“No, my mother legally changed our names after we got to Vermont, for protection, from them.”

“I will never give you a reason not to trust me, Mr. Trippen. At least not intentionally.”

His voice was hesitant. “I need to believe you.” A pause then, “I wasn’t trying to offend you, or anything, but I’ve learned to protect myself from people who you think are one way and they turn out to be the opposite.”

“I understand. To let you know, I had communications send me a physical description of your brother. According to this he’s five-ten, one hundred and sixty pounds, brown hair, blue eyes. I’ll pull up his photo when I get back to the station. He has an identification card, not a driver’s license. Is that correct, from what you know?”

“Yeah. He had a license, but he lost it–a drunk driving offense–and never tried to get it back. He might weigh less than one-sixty.”

“What’s his style in clothing, how does he wear his hair?”

“I haven’t seen him in two years. He was looking pretty unkempt at that time. Long scraggly hair pulled back in a ponytail, long beard. He wears jeans, and  whatever shirt or jacket he picks up at places like the Salvation Army.”

With a photo to match Trippen’s description of his brother, he’d be fairly easy to spot. There weren’t many transients in the county. They tended to pass through Winnebago in search of counties better equipped to handle their needs.

“Where is your brother headed to? Where is the altar located? ”

“I don’t know for sure. We were always blindfolded on the way there and back, plus it was dark out. You know, nighttime. It’s in a woods, and by either a river or a creek. I know that much. I’d say within fifteen minutes of Wellspring.”

“Wellspring is near the western border of the county. If you were blindfolded, how can you be sure it was in Winnebago County?”

“I guess I can’t swear to it, but I know we never drove over a bridge, which we’d have to, right, to leave the county?”

Good observation for a blindfolded kid. “From Wellspring?” I mentally visualized a map of western Winnebago County. “Yes, you’re right. So you think the altar might be somewhere on the southern bank of the Mississippi River, or the eastern bank of the North Fork of the Raven River? Or was it more like a creek?”

There were many creeks throughout the county. When rainfall was scarce, the Raven was more like a creek than a river in some areas.

“I’d say it seemed more like the Raven, or even a creek, than like the Mississippi. It was a little ways from the altar area, and I never actually saw it. But I could hear moving water not too far away.”

“If you were blindfolded how do you suppose your brother expects to find it? Do you have reason to believe he has been in contact with your stepfather?”

“No, not unless he found Jeff somehow. But Jeff would have told me that, I think, but I don’t know for sure. Maybe Jeff wasn’t always blindfolded. That monster took Jeff to the altar a lot more times than he took me, poor guy.”

“Are you clear to write down my number?”

“Is it the one you’re calling on?”

“I got it on caller I.D. As soon as I get to a rest station, I’ll pull off and send you the dagger photo.”

“Good. Thanks. I’ll put out an attempt to locate on your brother.”

“Thank you, Sergeant. I’m really scared for Jeff, and I believe I can trust you. I have to tell you, I didn’t feel that way about Lieutenant Armstrong. It was like he was hiding something.”

Armstrong was arrogant, but I had never had reason not to trust him. Did Trippen know something I didn’t?

Christine Husom is a Minnesota native. She is the author of Murder in Winnebago County, Buried in Wolf Lake, and An Altar by the River in the Winnebago County mystery thriller series. She enjoys solving mysteries in stories and in real life, and believes fact is usually stranger than fiction. Husom holds an undergraduate degree from Concordia University in St. Paul and a law enforcement certificate from Metropolitan State University in St. Paul.

Click here to buy: An Altar by the River