Severely abused as a child, Alex is left with horrible scars on his body and even worse scars within his mind. Even though it puts him in danger, he’s compelled to help those who call to him. He’s driven, motivated by his visions to rescue them and uncover the killer.

When he can, he helps the police; yet some detectives suspect he’s the cause of the problem, not the solution. Often, Alex finds himself alone and afraid in a world he doesn’t always comprehend. 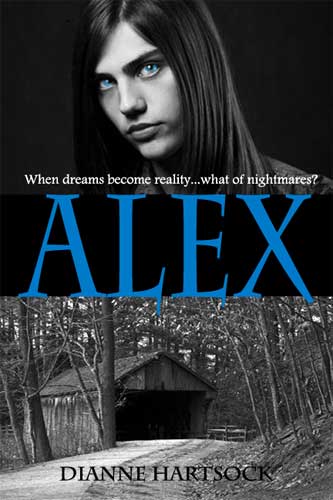 Excerpt:
Her skin was soft under his fingertips. Her bare shoulders, the curve of muscle in her arms, her slim fingers; all so soft. Her breath caressed his cheek as he stared at her lips. He wanted to kiss her. It was a risk, he knew, but he ached for someone to break the loneliness. He bent his head and ran his tongue tentatively over the sweet fullness of her mouth. Her tongue met his but he was unprepared for the fire that tore through him. She pressed against him to deepen the kiss and a wild madness surged through his blood.

Something was wrong. She cried out as she struggled in his arms. Her nails raked across his neck. He let her go and watched in bewilderment as she scrambled away, her breath coming in sharp gasps. He reached out a tentative hand, wanting to explain—apologize, but she stepped hastily away from him.

“Freak!” she spat and quickly fled.

He jerked as the word struck him, his arm dropping to his side. The pain of her rejection flooded him. He touched his mouth and wondered desperately what she’d seen as he’d kissed her.

She stopped at the end of the bridge and looked over her shoulder. He couldn’t make out her expression, but he hoped to God it wasn’t pity. He took a hesitant step toward her but she tore her eyes away and rushed off.

He watched her follow the road back to town, hurrying as the sun sank. The far side of the road was already lost in darkness. His shoulders slumped in defeat when she disappeared into the gloom.

Dejected, he sat on the edge of the bridge and dangled his feet over the swift current. The sound of the rushing water echoed under him, filling his ears. It dulled the edge of his pain, making him forget his humiliation as he listened. He could almost make out a voice in the resonance.

Jane felt the loneliness of the country lane as the shadows crept up from the ditch. The only other soul on the road was a girl hiking in the opposite direction. She recognized Sarah Gladstone, one of the girls Alex worked with and waved as they passed each other. The uneasiness at the approaching dark kept her from stopping to talk.

She frowned as she hurried on, wondering if the girl had been up at the house. She’d noticed Alex talking to her after work recently. Her lips thinned, not liking the idea of him bringing girlfriends home when she wasn’t there. Not that it was her business.

Disgusted with where her thoughts were headed, she pushed them away and broke into a trot. The two miles had been a pleasant walk in the morning but, as the light faded, she regretted not taking the car into town. She’d forgotten it would start to grow dark before she reached the house and she didn’t like to walk alone at night.

Relief flooded her when she reached the bridge. It was only another quarter of a mile until she was home. Her brisk steps slowed as she spotted someone else on the bridge. She suddenly remembered the news report she’d heard that morning and stopped, a spurt of fear running down her spine. The person was sitting with his back to her, watching the water. But that didn’t mean he wasn’t dangerous. Women had gone missing from the Fort Collinsarea. What if this …?

She jumped when the person raised his head and then she laughed in sudden relief. She’d recognize that profile anywhere. She’d studied it for years, hoping to understand the complexities of the mind behind it.

Slowly, she approached Alex, trying to read his mood. Concern quickly replaced her apprehension. Something had upset him. He always ran his hands through his hair when he was disturbed and she could see it was a tangled mess on his forehead.

She sat beside him and swung her legs over the stream. “Are you coming home?”

As fond as she was of her adopted brother, it would be the last straw in a trying day if she had to argue with him. Especially over some flighty girl.

But he didn’t answer, and she leaned forward to look at his face. His blue eyes focused vacantly on the water as it slid under his feet. From his distant stare, she knew he was going to have a troubled night.

“There’s a boy in the water,” he murmured. His words were slurred, dreamlike.

She sat quietly and watched the moving stream. “There’s no one there,” she said after a moment.

Doubt crept over his face and he shrugged his slim shoulders. “I hear him.”

He leaned farther out and tried to look under the bridge. She grabbed the back of his shirt to prevent him falling in.

She shuddered at the all too familiar slur in his voice that warned her his thoughts were miles away. She’d learned long ago not to ignore it. The times in the past that she had, he’d grown frantic and uncontrollable. He’d hurt himself, acting on some image in his mind.

Abruptly, she pulled him to his feet, knowing she’d have to be harsh to catch his attention. She changed her tone as if speaking to an errant child. “It’s time to go home. Come on.”

He didn’t seem to hear her as he swayed on the edge of the bridge. For one terrifying second, she thought he was going to tumble in. He could swim but she wasn’t sure if he would.

“Alex!” She jerked him roughly to face her. They stood eye to eye, both of them the same medium height. Many people mistook them for fraternal twins. They both had black hair, blue eyes, and slender bodies. Yet, she was always disconcerted by the intense blue of his eyes whenever they stood so close. They were the color of the evening sky; hers had a more greenish cast to them.

“Janie?” he said in bewilderment.

His baffled tone reassured her. It meant he was coming back from whatever strange place his mind had wandered off to. His eyes blinked and refocused. Her heart skipped a beat as the Alex she knew smiled meekly at her. She was suddenly aware of how close they were standing and pressed a hand to her fluttering stomach when she felt his breath on her cheek.

“I’m sorry; I must have been dozing.”

She grimaced as he quickly averted his face. It was a blatant lie and she knew it. Hiding it from showing in his eyes was his way of trying to protect her. He did it all the time. But she’d much rather he let her into his world, however divergent it was.

She slipped her arm through his and turned in the direction of home. “Never mind. Are you ready for dinner?”

He hesitated, looking at the black water. She tugged a little harder and he didn’t resist. Glancing back herself, she drew him gently away.