I lay here alone, frightened and in early labor. Kolli came just before my labor pains started, telling me that they were “running the rim,” to get away from the Pithaats and that things were going to get “rocky.”

Suddenly, my belly starts to cramp, and I hunch over in pain. The pains have been getting steadily worse over the past three days, that is nine meals, meals that I have barely touched. I rock back and forth, my arms held protectively over my swollen belly.

“You are too eager, you’re early, settle down and wait…Please…Wait,” I beg, hoping that the fight outside of these walls will see me freed to deliver safely under the U.W.L. and far away from the Pithaats. Singing lullabies from my childhood, I rub my distended belly as I try to ease the pains of my contractions. 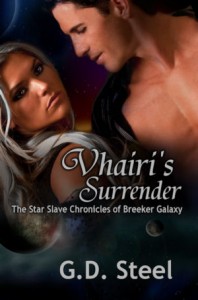 Hours have passed since Kolli’s warning. The searing pains now shoot around from my back to my belly in more frequent increments, making my belly hard and firm with every vice-like contraction. The meals and these cramps have been coming and going in random intervals while the ship shudders and shakes, rolling from side to side like some of the drunken Krei that have come to “visit” me in my bed. “Just one more day,” I cry.

“OH, Merciful One, not now!” I cry out, as with a sharp cramping more intense than any before it, there comes a warm gush of fluid from between my legs. I knew the signs from helping my mother tend to the other women during labor, there was not going to be any way to delay the birthing.

I am able to clean up the mess and then shower as the cramping eases for a little while. Exhausted I lay in my clean bed. I fall into a light slumber, reliving how this nightmare began…

I had just turned sixteen, three moons ago. Papa was now negotiating with the Treggor Clan for my Bride Price. I was to be married tonight under the harvest moon and the Blessing of the Goddess’ Light.

“Vhaire, me darlin’ hurry and get up. I made you breakfast. If you want to have this day to yourself, you better hurry before your Papa comes in from the negotiations. If he sees you, he will give you so many chores you will be busy until you’re hand-fasting with Ian Treggor. I, however, think that every girl should have her last day as a maiden free to frolic and play.”

My Ma’s hand stroked my head running down my long, straight, white hair. Laughing all through breakfast, she kept looking out the window to give a warning that would let me escape the many chores around the house.

“Ah, here he comes, Vhaire, hurry on with you! Out the back door, with ya! Come back by supper, there is no getting out of that.” My Ma kissed me on the cheek as she gently pushed me through the door. It had just closed when I heard my Papa come in, asking for me.

Bless her, she quickly made him forget all about me.

“Davie me Darlin’ leave the girl be, let her have this last day to be free. Come, I’ve made you breakfast. Sit and eat before it gets cold!” She scolded him, as I snuck away to the hay fields.

I was very happy that I looked just like her. I would forever be able to recall her beloved face just by glancing at my reflection. Her laughing, almond shaped, brown eyes stared back at me through the shiny metal hanging over the water basin that I used as a looking glass.

My world was small, without any real predators and we were mostly farmers and artists. Our lives were simple and apparently, so were our imaginations. As we gazed at the stars at night, praying to our deities, we never thought about anything or anyone else out there. Never in our wildest dreams could we ever have imagined that we were not safe and that there were others somewhere among the stars.

I can’t help but wonder that if we had known, would it have changed anything? Would we have kept more of a watch on the skies? Would we have been able to run? Hide? We were a gentle folk. I don’t think that we would have. I think we never stood a chance. I digress, easy to do in your dreams, but like all nightmares, the horror will eventually happen.

I was half asleep in the hay fields as I named shapes in the clouds when suddenly, the sky turned grey. A deep, bass hum filled the air. The ground started to vibrate and the hay flattened out as if it too, was afraid.

I heard distant screaming as I looked around. Floating in the sky was a huge, green monster with orange stripes. The monster’s maw opened up, and a bevy of beasts burst through the opening. They flew without wings straight to the village, orange and green bursts of light striking down all before them. Those that were hit with the orange glow fell to the ground with smoke rising from their chests.

I stood there frozen as I watched some of the villagers grab rakes, hoes, shovels; anything to fight off the flying beasts that had descended upon us. My paralysis continued as a scream of my own lodged in my throat, coming forth as nothing but a strangled whimper as I watched my Papa grab a pitching fork and hurl it towards one of the flying beasts. It hit one of the monstrosities, yet it just bounced off of it, doing no harm. Orange fire hit my father.

Ma ran from her kitchen waving her giant skillet as she ran towards my fallen father only to crumble at his feet as another orange blast hit her in the stomach.

I woke to the sound of my own screams. I curled into a tighter ball, tears streaming down my face as I grieved again for the loss of my beloved parents and my world, until slumber took me over once more. I saw many people killed that day, but many others were captured like me.

Judith Leger Nov 15, 2018 5
Art and Writing I am an artist - I am a writer. There are many mediums I use to create a piece of art; oils,…
Publishing