After what seemed like an eternity, the three travelers finally arrived in Anthis. As the wagon approached the school, Reid leaned forward in his seat. A solitary figure sat on the bench outside the front door.

Reid recognized the short but muscular build as belonging to Nolan, one of his students. Gillis had labeled the young man as a lone wolf, and Reid considered it an apt description. Nolan offered no more friendly gestures than Dee, glaring with his black eyes through his unruly dark hair, which played mane to his bronze-skinned face. Reid drew the wagon up short.

“Wow, I didn’t expect you to be part of the welcome party,” Reid commented, trying to elicit a smile. The boy shrugged.

For the first time in hours, Dee spoke. “He would appear to be the entire welcome party,” she grunted.

Nolan glanced her way. He pursed his lips and jutted out his chin in an open sign of aggression. Typical, thought Reid. Nolan preferred to put on a tough guy show. Reid was not sure if the boy did it out of insecurity because of his small stature, or if there were underlying stresses which Nolan kept to himself. The fact was that the young man did seem to bear a chip on his shoulder. Nolan gave Dee one last cold stare then turned to speak to Reid.

“I wouldn’t go in there if I were you. It’s dangerous. I’d rather be in my mouse-hole of a room right now as opposed to out here exposed to the elements, but a cold’s nothing compared to what I could catch in there.” 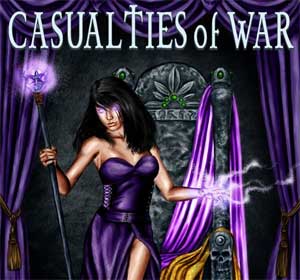 It was Reid’s turn to frown.

“What are you talking about?” Reid climbed down from the driver seat and approached the surly student. “Where is everybody, Nolan?”

Nolan crossed his arms and eyed Reid with contempt.

“If you want to know so bad, go in and see for yourself.”

Without even considering the newcomer now perched on the edge of the wagon, Reid hurried over to the door. He opened it only to find Clayton, Gillis’s brother, standing on the other side. The lanky youth looked tired, and more nerve-ridden than normal, if that were possible. What disturbed Reid more than Clayton’s anxiety and obvious fatigue was the absolute expression of horror captured in the boy’s face.

Clayton struggled to speak, glancing out past Reid at Nolan. Abandoning his attempts to explain, he resigned himself to silence and gestured for Reid to follow.

When they entered the space that had been designated the Common Room, Reid could no longer deny that something was drastically wrong. Several of the students were there, looking severely lethargic and drawn in the face. The more shocking sight, however, was Gillis. He lay sprawled in a settee when they came in, but struggled weakly to his feet when he realized exactly who it was who had arrived. His skin was grey in color and his cheeks sunken in. He wavered where he stood, having barely managed to muster enough strength to stand in the first place.

“Tell me I’m not hallucinating, Reid,” he breathed. “You’ve been here three times already, that I can remember…I’m sorry –so sorry.”

Reid remained frozen in place, trying to grasp what exactly was going on. Finally, he faced Gillis, who was now leaning on the settee for support.

“It’s the magic plague, isn’t it?”  Reid stared at his partner, his eyes filled with dread. “How?” He sat back in one of the chairs, crumpling as though he had been kicked squarely in the groin.

Gillis shook his head. “I don’t know, but it’s worse than you might think. Nattie, she’s dead, Reid. She wasn’t in the best health to begin with. She only made it three days. I don’t know how long the rest of us have either.” As he spoke, he gestured towards the sickly students huddled about the room. He sat down quickly to avoid falling over.

Reid sat near catatonic in his chair, overwhelmed by the situation. His dream had been blossoming, growing. There was still a great deal of work that had been ahead of him, and he had known that there would be challenges, but he had never expected anything like this. It was like a giant foot had come out of nowhere, treading down with great force and crushing everything he had managed to build.

“What are we going to do?” Reid murmured. His head was spinning.

Gillis slumped back in the settee, his expression grim.

“The University! They won’t give me anything. Do you know how happy they will be to see us out of business? What are a few fatalities for the sake of eliminating the competition?”  Reid’s shoulders sagged. He closed his eyes, wishing he could make all of this disappear.

Gillis eyed him wearily, not ready to admit defeat. “You have an in, Reid. That friend of yours, she can help you. It’s our only option. If you don’t head over there right now, I suggest you just pack up and leave town. That is, if you haven’t contracted the plague already yourself.”

Reid sat in quiet contemplation for a few minutes, trying to gather his wits.

“No matter where you decide to go, take Clayton with you, please,” Gillis begged. “The less time he spends in here with us, the better.”

Drawing in a deep breath, Reid got to his feet and headed for the door. Clayton followed closely at his heels. Of all the things Reid could have possibly imagined going wrong while he was gone, this had to be the worst.

Nolan shrugged casually, ignoring Reid’s piercing stare. “You probably wouldn’t have believed it until you saw it for yourself.”

Prequel to The Blood Is Strong: False Tranquility