Echoes Among the Columns

The great god Ra had not yet arisen from his bed beyond the world of man. Neither had the members of the royal household of Egypt who all still slept soundly in the cool air of the palace.

No one heard the faint clattering sound of a wooden stylus and a wax tablet dropping to the floor in the vast echoing expanse of the heavily columned hall during the dead of night. But when the new day began and the body of Senenmut the prince’s scribe was found with its throat cut, the old hall and the palace would echo to the outraged cries of the pharaoh’s immediate court.

Amenemhat had carried out his task efficiently and without emotion. It had been easy to lure the deviant scribe with a promise of sex in exchange for a specifically prepared papyrus scroll.

The first name on his list of traitors could be struck off. 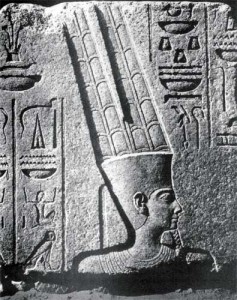 Ever since Hatshepsut had taken up the exalted double throne of Upper and Lower Egypt, becoming pharaoh, her nephew and stepson Tuthmosis – the third to bear the divine royal name, was incensed by the thought of a mere woman ruling Egypt.

As he grew to manhood the young prince slowly gathered together a small group from within the royal household. They had all gladly changed their allegiance.

The politics of pharaoh’s court bred an atmosphere of fear, lies, plot and counter plot, jealousy and corruption.

A tiny handful of Hatshepsut’s more ambitious junior scribes, servants, priests and astrologers formed a ring of spies working for her scheming nephew. All were willingly feeding him information, equally appalled by the unnatural abomination who currently sat upon the throne and eager to please their future god king.

In his fevered mind Tuthmosis firmly believed his coldly efficient assassin Amenemhat was his most powerful weapon. As a means of persuasion, there was none more suited or highly adept at recruiting the more cowardly and reluctant courtiers to his nefarious cause.

But the coldly efficient killer had a secret agenda of his own. It suited his purpose to go along with Tuthmosis for now, pretending undying devotion and loyalty to the upstart prince.

His exalted position as Hatshepsut’s trusted bodyguard meant he had free access throughout the palace and the ear of her loyal generals, scribes, priests, judges and astrologers.

When Hatshepsut went to war, Amenemhat was by her side, on guard and ready to give his life for her. When she toured Egypt, his eyes and ears were constantly on alert for trouble. When she needed unbiased and honest advice, she secretly confided in him. As the god king of Egypt, Hatshepsut regarded him as her only true friend within the royal household with no personal agenda.

Unbeknown to Tuthmosis, he had added a few more names to the list of those who were to be assassinated on the prince’s orders. Names of people who Amenemhat deemed dangerous in the extreme to his pharaoh appeared. What did it matter if when he exposed her nephew by revealing the list, a few more enemies of his beloved Hatshepsut had also been done away with?

To divert Tuthmosis should he become suspicious, whenever the prince was attending his aunt feigning loyal devotion and love, he continued to praise his pharaoh in public.  But when he was alone with him he made a great pretence of cursing her, despite the emotional pain it brought him to utter such vile traitorous oaths.

Since he had first entered her service, and despite the barbarous act inflicted upon him when he was but a child ending his chances of ever being a real man, Amenemhat’s deep unspoken love and his effeminate physical longing to share Hatshepsut’s bed meant he would always protect her. He would never allow the young pretender to end her life, be it by poison, foul accident, act of war, or any other means that Tuthmosis decreed.

Amenemhat would continue to add names to the list. Then he would turn his deadly gaze in the direction of Tuthmosis and his band of conspirators. When the time was right he would expose his beloved pharaoh’s nephew for the foul cur he truly was.

A terrible cry echoed throughout the columned hall –“Murder, foul and bloody murder!”

Illuminated by the first shafts of light, the body of Senenmut had been found.  Meni, chief advisor to Pharaoh Hatshepsut hurried with the news through the vast corridors of the palace. The guards to the pharaoh’s private apartment silently opened the door allowing the old man access.

“Grave news majesty! Senenmut has been murdered,” the old man said as he prostrated himself before her.

Hatshepsut rose from her bed in alarm, waiving away her young hand maiden and lover Nefer. The pharaoh’s classically beautiful face saddened. A single tear flowed down one cheek as she gently assisted the old man to his feet.

“Good Meni bring Amenemhat to me.”

The old man breathlessly backed away bowing low, then turned and quickly left.

Maatkare, Hatshepsut’s old wet nurse, appeared from the side room where she always slept close by her beloved charge and put a comforting arm around her trembling shoulders. She had always been at her side throughout her life. The old woman tenderly wiped away a tear from her pharaoh’s cheek, comforting her as she had done when Hatshepsut was but a child.

Amenemhat strode through the door.

“Majesty I have just heard the news.” The tone of his high pitched voice did not betray him as he lied. “I have already taken the liberty of sealing off all access to your majesty’s palace. If the assassin is still hidden within as I believe he is I shall seek out the truth of this evil act. By nightfall I swear the assassin shall be despatched or be grovelling here before you, pleading for his worthless life.”

“Noble friend leave no stone unturned in your search, now go,” she replied with a weak smile struggling to break free.

Amenemhat hesitated for a moment at the door before issuing a command. From beyond the entrance to the pharaoh’s bedroom, six heavily armed members of Hatshepsut’s imperial guard quickly entered.

“Majesty until the assassin is found these guards I have personally chosen will protect you. I have also ensured that guards have been placed around prince Tuthmosis’ apartment,” the eunuch said finally as he bowed low, turned and quickly left her bedroom.

By leaving the dead scribe’s body where it would easily be found, Amenemhat had changed the rules of the deadly game to his own advantage.

Tuthmosis was no fool. He would know the eunuch had betrayed him. But by sealing the prince off, effectively Amenemhat had silenced him at least for now.

He would have to be watched constantly which was why Amenemhat had asked his old friend general Djoser, the man Hatshepsut had placed in charge of her imperial guard on his advice, to take charge of the prince’s safety personally. The royal snake would try anything now to escape his gilded prison. Amenemhat had given Djoser specific orders that there was to be no communication whatsoever between Tuthmosis and the world beyond his door.

All of this had happened moments after the alarm was raised and before Amenemhat had been summoned into Hatshepsut’s presence.

Now it was time for the next move.

Amenemhat entered the office of Nebhepetre the pharaoh’s personal scribe.

“You have heard the news by now?” he enquired.

“Truly we live in terrible times Amenemhat,” he said with a note of fear in his voice.

Amenemhat produced the papyrus scroll for which the traitorous Senenmut had paid with his life from the folds of his kilt with a flourish.

“This bloodstained list of traitors was found on the body of the dead scribe. Copy the names for the archive quickly now Nebhepetre then deliver the original to your pharaoh. Hurry now, an assassin is on the loose within the palace!”

The frightened scribe’s eyes bulged in sheer terror after Amenemhat left when he quickly scanned the list before making a copy.

At the top was the name Tuthmosis.

Hatshepsut’s hands trembled violently as she read the bloodstained papyrus Nebhepetre had just delivered. For a few brief moments she hardly dare believe the evidence of her own eyes. Yet here was clear proof of a devious and deadly coup d’état, designed to end her life and overthrow her reign. What really saddened her was that the leader was her own much loved nephew Tuthmosis!

Under Amenemhat’s orders, all named on the list were quickly rounded up and executed on the spot before their bodies were put on public display outside the palace walls. By mid morning there was only one left alive – prince Tuthmosis.

On Hatshepsut’s personal orders general Djoser entered Tuthmosis’ apartment where he forced the young prince to drink poison away from the eyes of the court and the world in general. To keep up the illusion of the royal family being living gods, not one drop of their blood should ever be spilled in public.

In one fell swoop Amenemhat had delivered his beloved pharaoh from the nest of vipers within her household.

A proclamation was made and sent to the farthest corners of the land. All Egypt was told of the tragic passing of Tuthmosis. At the end of the month, his elaborate funeral worthy of a prince of the royal line was duly held.

Hatshepsut shocked all assembled there that day, when in her deep gratitude she declared the eunuch Amenemhat forthwith to be supreme general of her armies and co-ruler of Upper and Lower Egypt.

While he may never share her bed as her lover, he would ensure that no one would ever again threaten the woman he loved beyond all else in the savage world of the Egyptian court until the end of her days.

From now on there would be no more echoes among the columns, only whispers…

Footnote:
While the above story is nothing more than a fiction, in reality on the death of the most significant female pharaoh ancient Egypt had ever known, her successor Tuthmosis III did take great pains to wipe away all mention of Hatshepsut. On his orders all images or her, and cartouches bearing her name, were chiselled into oblivion.