The ally was the surest way to get from here to there. I made my break out the screened back door and high-tailed it over the three-foot wooden fence. The dirt felt good on my feet. The air was clean and warm. 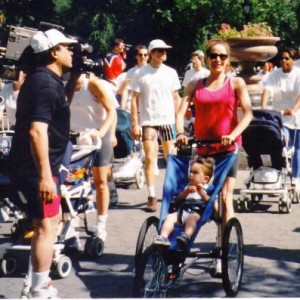 I heard Rebecca yelling, “Harvey! Harvey! Come back here!” I kept moving. I had to leave that suffocating box of neglect.

It had been raining for days. Today was the first letup in the downpour. My window of opportunity had opened. Parting clouds revealed a canopy of blue-skinned sky.

“Harvey! Har . . .” Her pleading voice merged with the outdoor symphony of untuned life. Some dogs a few houses down began barking furiously and rushed to the fence as I ran by.

Their snouts pushed between the slats. They barred their teeth and growled. I smiled with fresh delight and kept on running. A compost of scents invaded my open nostrils. Flowers, weeds, car oil, and rotting fruit filled the air with sweet and sour fragrances of paradox.

I walked across the street to the next alley and saw a large teenage boy on one of those little bikes; the ones they ride that are for someone half their age and look so ridiculous. As he got closer, I tried to relax and keep a steady gait.

He rode by, as if I didn’t exist, then suddenly slammed on his brakes, did a broody in the gravel and came after me. I expected as much. I ran with surprising speed and left the gangly creature pumping away in useless pursuit.

Not thinking this way or that, I headed north or was it south? This freedom thing had a nice feel to it . . . no expectations, no parameters, no boundaries, fences, doors or control . . . a little dangerous now and then, but nothing too bad, at least not yet.

Turning left and stepping onto the sidewalk, I almost ran headfirst into a baby carriage. The woman pushing the thing looked OK. I tried to make small talk, be polite and all; but she kept on walking, looking into the big box on wheels with oblivious love and attention.

Good thing really. It could have been disastrous. One slip or mispronunciation and the charade was over. Say the wrong thing or look cross-eyed and the next thing you know she’s making a federal case out of it. “What do you want?!” “Be quiet!” “Get lost!”

You know how it goes. When all you ever hear is that kind of dribble, you learn to put a muzzle on it. But sometimes I just can’t contain myself. Everything builds up until it’s bouncing around inside like a firecracker and I’ve got to explode with a good shout or holler.

Somebody mowing their lawn turned the corner and went along the side of their stucco home. A calico cat looked out a big frame window in a trance until it saw me and freaked. Thank God the power mower drowned out her screams.

Home after home; row after row; fence after fence. They all look alike – wooden garages, tin mailboxes, aluminum trashcans, and metal cars. I was just another piece of furniture, another possession in her suburban, material world. Some used luggage to be stuffed with old knick-knacks and thrown in the garage for storage.

Sure, she’d feigned affection at first, they all do. It was shallow, temporary, a superficial semblance of real friendship. She didn’t need me, never did. I was one big nuisance. It hadn’t started like that. As a baby, I could do no wrong. She smothered me with affection. But the older I got, the more distant she became. By the time I was a young man, she didn’t know what to do with me. I told her again and again that I wanted her to stay home, but she never listened. I couldn’t take it anymore.

I didn’t realize I was crossing the highway until I heard one of those skids that send shivers through your spine. I saw the tire headed for my face and jumped out of the way without any time to lose. As I zigzagged to safety, I glanced down the street and saw the black and white moving slowly in my direction.
“
Cops!” I sneered. “How could she? I never hurt her.”

I took off around a small house, hopped the fence, ran through their garden, climbed under a railing and wound up next to someone’s garbage. I hadn’t eaten since early morning and could feel the saliva starting to ooze between my lips. Instinctively, I knocked off the lid and grabbed some leftover bread.

It’s amazing what people will throw away – perfectly good food, just because of a little spot, a bruise or some other perceived imperfection. I wondered if she would have thrown me out someday, just like the garbage. I’m not perfect. I have my flaws. Who doesn’t?

“Hey! Get out of there! Get lost!” Someone screamed. I didn’t wait around to see where the sound was coming from. I took a big chunk out of the defective loaf and dashed around a hedge. I kept walking and swallowed hard, not knowing when or where I’d get my next meal. It didn’t seem like I’d been gone that long, but the air was getting chilly and the big, hot, warm, glowing thing in the sky was starting to melt into the ground.

The hair on the back of my neck started to bristle, as second-hand thoughts intruded upon my territorial sense of temporary emancipation. “Maybe it wasn’t that bad,” I questioned, as the sky grew darker and loneliness crept into my fur, like a pack of terrorist fleas.

As I meandered over some sharp gravel, which cut into my paws, I saw some houses that looked just like ones next to mine. I must have gotten turned around somewhere. The porches, front yards, and walkways smelled oddly familiar.

Before I caught her scent downwind, Rebecca grabbed me from behind. She’d make a first-class hunter if she didn’t have to walk so clumsily on her two back feet.

“Harvey. Where have you been?!” She picked me up and held me close, running her warm hands over my back and face. “You naughty boy! You had me worried sick.”

She didn’t act very sick. In fact, she looked happier than I’d seen her in a long time.

I put my head on her chest, licked her fleshy pink face, and whispered, “It’s good to be home.” She probably just heard, “Bark, bark bark.” but hey, I meant it.