The next new trend: serialized stories.  Several authors are jumping on the bandwagon. Just like a cliffhanger!

I have started a free to read story on my website that starts with a alien visit from outer space.  After an interlude with a passionate alien, Lanie  wonders if it was all a dream.    She is haunted by it and sets all her goals on the stars.  As of this writing we are up to part 4.  New episodes are added each Friday.  I will share part 1 with you and you can visit my website to catch up. 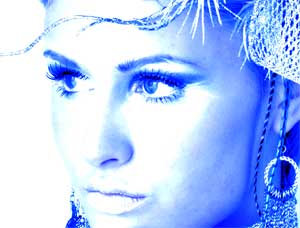 Lanie was only fifteen years old when it happened.  Home alone, she walked out to the patio of her parent’s home.  The pool lights glowed invitingly.  She took off her sandals, and sat on the edge of the pool, dangling her feet in the water.  The quiet was only broken by the sound of the water rippling around her legs.  The house sat on several acres well outside of town.  The night was warm, and a slight breeze spread Lanie’s strawberry blond hair across her face.  Brushing the hair from her eyes, she looked skyward.  The usual constellations met her view, as she scanned the sky.

Always having a fascination with the vast darkness of the universe, she wondered who was up there looking down.  Her eyes focused on a distant dot.  As many times as she had gazed into the stars, she knew when something was out of place.  Making a frown as she scrutinized the area surrounding the anomaly, she stood.

“What the heck?”  She mumbled aloud.

It wasn’t just a dot, it appeared to move, and as she watched, it became larger.  Lanie stumbled over a lawn chair as she backed up towards the house.  Her mouth was open, still transfixed on the approaching object, she could hear herself breathing.  It glowed like a star, and it seemed to pulse occasionally.  As she continued to watch, it flashed brightly, and then the light was gone, she gasped.

Lanie looked left and right across the sky, hoping to catch sight of where the light had gone.  Seeing nothing unfamiliar, she ran into the house and up the stairs to her bedroom.  Her telescope already aimed up towards the sky, she looked out her window to find the spot where she had last seen the light, then aiming the telescope there, and she looked through the eyepiece.

Knowing it wasn’t something as simple as a satellite, or a known spacecraft, she was sure she had seen something quite rare.  Lanie continued to look for fifteen or twenty minutes, before she finally gave up.  Shoulders slumped in defeat, she sighed heavily.  Dragging herself to her bed, she fell across it.  Her eyelids became heavy as she looked up at her ceiling.

Her eyes fluttered open, but a bright light prevented them from opening in more than a squint.  Disoriented and confused, she sat up in her bed, shielding her eyes with her hand.  The light blinked out, and it was then she heard the low hum.  Running to her window, she looked out into the yard below.  Her mouth formed an ‘O’ shape, but no sound came out.

Back To Smashwords After KDP Select