Louise couldn’t stay unhappy for long. Being out on a horse in the mountains made her heart swell with joy. An echidna waddled by, snuffling for ants. A kookaburra declared his territory with a cackle that built to a raucous laugh, only quietening after the horses passed by.

Breaking out of the trees, Louise marvelled at the alpine flowers carpeting the undulating hillside. Purple, white and yellow stretched to the horizon. A lone wedge-tailed eagle soared in lazy circles overhead. 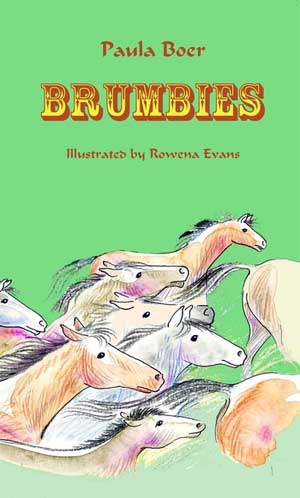 Ben held up his hand and signalled for silence.

Louise froze. She didn’t know what Ben had seen. Then a movement caught her eye. Far away to the left in a sheltered hollow, two horses grazed. The black coat of the lead one shone like ebony. A larger liver chestnut with a thick mane and tail kept a few paces behind.

Ben turned slowly to Louise and indicated for her to be quiet with a finger to his lips.

He kept his voice to a whisper. “Bachelors. They don’t belong to any mob. The mares push them out when they reach breeding age. I bet they’d like Lady to start their own herd.”

He applied his legs and a tiny bit of rein, causing the responsive mare to perform a perfect turn on her hindquarters. With a last backward look, Louise also turned her gelding and headed back into the trees, though not with the same elegance. The thought of the young stallions occupied her mind.

“Can they be dangerous?”

She couldn’t see how two young horses could harm them when they were mounted on well-behaved domesticated horses.

“No point risking it. It doesn’t matter, there’s another way. It’s just a bit longer.”

Ben squeezed Lady into a trot along the trail they had just travelled, then turned into the scrub. The delicate mare flashed her white socks as she lifted her feet high to navigate over dead branches and rocks.

Louise couldn’t tell where the track ran amongst the trees. Everywhere just seemed like a jumble of fallen timber.

“Do you know where we’re going?”

Ben emerged onto a dirt road. “This is the Broken Cart fire trail. Come on, let’s race!”

He took off before Louise had even gathered her reins. Ned followed Lady without any instructions from her. Louise leant forward and rammed her feet deep in the stirrups. The fire trail rose and fell, winding around trees. Adrenaline surged through Louise’s body as her horse picked up speed. She heard Ben shout from up ahead but couldn’t make out what he said.

The next instant she saw a large tree across the track. Without time to think, she grabbed her horse’s mane as he leapt over the fallen trunk. No sooner had she sat up she had to duck down low against his neck to squeeze under a branch at head height.

Louise didn’t know if Ben had heard her or not as he raced ahead. She hung tight with her knees and shortened her reins. The exhilaration of hooning along the track made up for her fear.

She caught up with Ben where he had stopped. Having pulled Ned up with ease, she sagged, relieved she hadn’t fallen off, but at the same time wanting to race again.

He grinned at her. “How cool was that? We’d better walk for a bit.”

Louise nodded, unable to speak, her heart pounding in her chest. She had never ridden so fast. She patted Ned on the neck with shaking hands and loosened the reins to the buckle. The gelding stretched his head to the ground and blew his nose, then gave a violent shake through his whole body. His bit chinked and rattled. Louise felt as if her bones did the same.

By the time the riders reached the edge of Tumbleford Farm, Ben’s home, the afternoon sun hung low in the sky. Louise’s legs felt like jelly.

“What a great day! But I can’t get that beautiful buckskin out of my mind. She looked so healthy and full of life.”

Louise recalled how the young mare’s coat gleamed bronze in the sun, her thick black forelock wrapping behind her ears as she galloped, her black legs a blur of agility.

“How could anyone kill such a magnificent animal? Are you sure we can’t do anything to save her?”