Today she arrived at the beach with the weather forecast telling of gorgeous clear skies and a high temperature of eighty-one degrees.

Unbeknownst to her four potential lovers would vie for her attention, lustfully admiring her in her tiny string bikini. Each spent hours showcasing his best features to win her as his alone. Their flirtations made her head spin all afternoon. 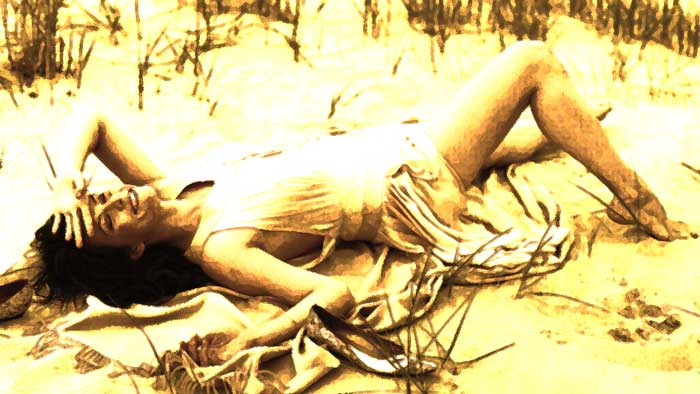 The powdery white sand, soft as confectioner’s sugar caressed every delicately painted toe. He invited her to escape the heat by burying within his sensual coolness. And then he deceived her with his weightlessness, greedily clinging to every lovely tanned curve he could find. It remains a mystery to her how he discovered the tender skin along the inside of her upper thighs without invitation. Even when she became aware of his licentiousness she could not resist the guilty pleasures of the amazing softness of his touch.

The second suitor, the gentle coastal breeze, showed his dedication and strong desire.  He traveled to shore from far across the Gulf waters just to lift and play with strands of her long hair. But, like the sand, he was also a deceptive lover. He tempted her, cooling her from the intense afternoon warmth while he wanted only to enjoy rushing across the smoothness of her legs, toned from thousands of miles of cycling . . . to tickle the downy hairs along the flatness of her stomach just above her bikini bottom . . . to race across the graceful curves of her hips.

He became somewhat angered that he could not pull down her unfastened halter top to allow him to caress her breasts. Then, his true nature was revealed, flipping her papers so that her writing was impaired. But, despite his ill nature, she happily allowed him to gently fan the back of her neck, hot and damp under her hair.

The golden sun was a more persistent lover, intent upon enjoying every exposed inch. He delighted in the raised tops of her breasts, pushed up by the padding of the swimsuit. Confident that effect was for his pleasure alone, he kissed them so deeply they turned rosy from his passion. He must have truly thought she was his lady since she permitted him to taste the skin of her nearly bare ass, sculpted by her ongoing affair with her bicycle. Shhh, don’t tell the sun. He did think that she’s his, since he proudly left his marks upon her. He tried to convince her those were signs of his lasting love. But, she knew he was no better than the others. Her bronzed skin and the highlights he placed in her hair would fade; his love was actually no more than lust.

Only to the cool salt water she gave the right to touch those private areas beneath the small triangles of cheetah print fabric. He laughed at the foolish sun while he sent a wave inland, rising up to the height of her breasts, making her nipples hard in response to his caresses. He seemed secure knowing he alone could enjoy those areas of extremely sensitive pale white skin that she had so carefully kept from the others. His tongue slowly licked down her belly and inside her bikini bottom. He was the best lover, granting her every pleasure as he swirled skillfully under the cloth, between the folds of her tender skin and up inside her, enjoying her heat. But, although talented and truly passionate, he remained quite cool and aloof. So she gave him no commitment.

She continued to tease the affections of the sun, coastal breeze and white sand on the shore for hours while her amorous water lover wooed her with his romantic song. This enraged the other suitors. The sun attempted to best him, evaporating his clinging caresses. The sand who had been washed off of her long, lean legs retaliated. He clung to every trace of the water lover’s kisses. The water smirked at them when their efforts only prompted her to return to the Gulf. The more they battled him, the more she was driven wild wanting the titillating licks of his cool tongue all over her. This caused the breeze to ally with the sun, secretly hoping to win her for his own. But, his breath only gained him an enemy in the sand, who he blew off of her silky skin. The two of them became embroiled in a battle for hours. The sand lifted up into the air current and thrilled at new places to embrace his beauty while the wind blew those arms away. Preoccupied with each other, the sun took advantage. He sneaked in his servant, the moon, to distance the tide of her most ardent lover.

Despite their fierce competition, the lovely lady was unable to choose only one paramour. The breeze, sun, water, and sand had each seduced her; she lusted after them all. Yes, she was fickle, but what a delicious treat it must have been, being pampered by the sensual pleasures of four lovers throughout the entire afternoon.

I am a writer of fantasy romance/erotica . . . the magic of romance.