As Precious As Gold

The drought had lasted many moons. Life’s energy on earth was slipping away. Mammals, reptiles and fish had perished in silent misery.

Plants, grass and trees were nothing more than brittle, gray, useless matter. Every source of water was bone dry. Ponds, rivers, streams, lakes, glaciers and snow had all evaporated in the sun’s scorching heat without the slightest whimper of protest.

Insects were the only creatures to survive. The most numerous and efficient of the insects were from the Formicidae (Form-i-ka-day) family – more commonly known as ANTS. 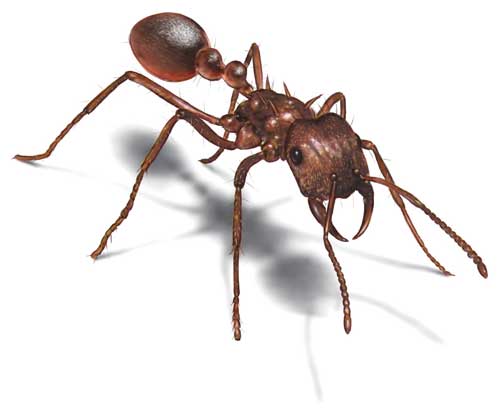 Ants stick together come low or high water. They live in groups called colonies. Each ant has a specific job as a queen, soldier or worker. The queens lay eggs; the soldiers kidnap other ants; and the workers make the nests and bring home the food. Most live and die as workers.

As the drought continued the Formicidae’s (ants) old methods of obtaining food began to fail. Normally a few scouts would discover a food source and lay down “odor” or “smell” trails for the workers to follow. Others would eat the food they found, return to the nest and proudly throw-up to show they had discovered a feast for the entire family.

One day some of the queen ants began to notice that many of the male workers were not returning from food expeditions.

Ants, as you know, are very sensitive to changes in moisture. After tasting some of the soil the queens realized what was happening. The ground water was slowly disappearing. The missing ants must have died of thirst. Drastic action had to be taken or they would soon perish!

As the queens cried about their fate, a small worker ant, known as Mosha, timidly raised her voice and said, “We can’t solve this alone. Why don’t we get all the colonies together?”

What an incredible idea! No one had ever dreamed of such a thing. The queens instantly agreed and sent an urgent decree for all Formicidae to meet on the Serengeti Plain in East Africa.

It wasn’t long until ant colonies from all corners of the globe began to arrive.

Some made the treacherous journey floating on wooden logs across the sea. Others glided with the breeze on leaves they had bound by silk. Long columns were seen marching across the barren land in an array of bright colors and sizes.

If you looked closely you could see Sauba ants from South America and Red and Wood ants from North America. Running from India, came Sima rufo-nigra colonies. From Australia and Tasmania swarmed Bull-dog and Myrmecia Formicidae. Hawaii sent l. Falcigera families floating on gusts of wind. Java displayed Dicthadia tribes, and eastern Asia had Oecophylla smarogdima coming by the thousands.

In the midst of this historic event were the Africans. Algeria and Tunisia sent Messor’s. South Africa had a large Honey-tub contingent and African Driver ants were everywhere.

What a sight! The entire Serengeti Plain was brimming with over 15 quadrillion ants! It looked as if a soft, reddish-brown carpet had been laid out from one end to the other. Even more amazing was the fact that not one incident of violence or kidnapping was reported.

The ants had agreed upon a peace treaty for the first time. Up until the drought the colonies had often fought one another and embarked on frequent slave raids. Most reported “battles” between Formicidae are actually raids to obtain additional larvae (baby ants) to increase that colonies work force.

As the Ants United Nations of Tribes (A.U.N.T.) began to meet, a humongous, dark, enchanting cloud arose over Mount Kilimanjaro (the highest mountain in Africa).

At first the ants were scared. It was so big its shadow covered the entire Serengeti Plain with darkness. Their fear quickly turned to happiness when they realized this cloud could end the long drought.

After two long, cold days of anticipation it became clear that this cloud was not heavy enough to drop the life-giving rain that was so needed, even though it was their last hope. Time was running out.

How could they convince this rainmaker to drop its precious cargo? They tried talking to the cloud. It didn’t budge. They yelled, screamed and begged for it to release its water, but it didn’t seem to care. Even ancient rain songs wouldn’t budge its frozen heart.

Putting their antennas’ together, Mosha and the other ants came up with a daring plan. If enough of them could make it to the top of Mount Kilimanjaro alive and breath heavily upon the cloud, perhaps that would create the moisture (condensation) it needed to release the rain it held so tightly.

What did they have to lose? Their bodies would soon turn into dirt without some rain.

The ants began to whisper, “Who will lead us?”

A unified cry arose from the crowd, “Mosha! Mosha!”

The queens arose and selected Mosha without dissent. After all, was it not she who brought them together and was not Mount Kilimanjaro in her own backyard?

Mosha was scared. As a worker ant she had always followed, now she must lead. She finally stepped forward and exclaimed, “It’s breath or death!”

Mosha’s first action was to have the workers construct a road up the mountain. Then she had two quad-trillion soldiers link their bodies into one long rope leading up the road. The remaining Formicidae carefully climbed the road by walking on the back of the living ant-rope.

Straining with every step of their many legs, they crawled to the peak of the mountain and collapsed from exhaustion and lack of oxygen.

The dark cloud was still floating quietly above.

Mosha was almost dead from thirst. With her last bit of strength she urged them on. “Stand up! Don’t give up! We must breathe together, now!”

Upon hearing Mosha’s plea the ants arose. They quietly began to inhale and exhale.

At first their tiny puffs of air were like a trickling stream. But they didn’t stop. Within minutes the force of their breathing turned into a river of wind and the river quickly became a mighty sea of air pulsating through the cloud.

As the ants finally fell still upon the rocks gasping, Mosha saw the cloud take a long deep breath, turn black as night and with a heavy sigh, it began to cry.

The cloud’s tears fell softly upon the mountain. As drops splattered their bruised and battered bodies the Formicidae screamed with excitement and scurried from one antenna to another, dancing in amazement! To see ants scream and dance is an awesome sight. Never before and never again, have they exhibited such behavior.

The lowly Formicidae, one of the smallest creatures on earth, had literally saved the world from becoming a gigantic dust bowl. And though ants aren’t known for boasting or bragging, they gave Mosha a hero’s welcome when she descended the mountain and crawled back to the plains of her birth.

From that day on, ants have treasured their water (H2O) resources. They know only too well that clean, pure water is more precious than gold.